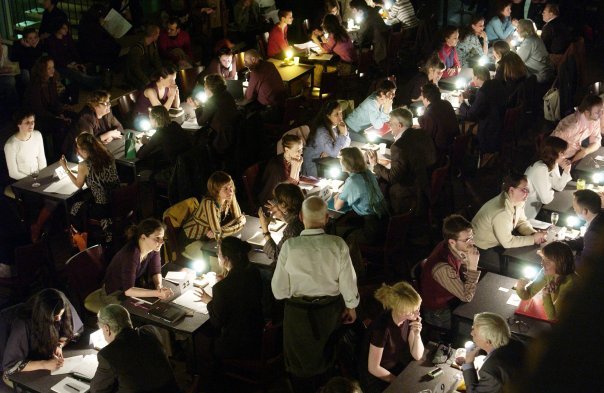 Hannah Hurtzig’s Mobile Academy has been realising projects with alternating partners, in which different narrative formats of communicating knowledge are put to the test. Since 2004, talks, dialogues, narratives and consultations have resulted in various film and sound archives on the theme of ‘Narratives of Places, Cities and Territories’. Examples of the kinds of work under Mobile Academy below.

The Blackmarket for Useful Knowledge and Non-Knowledge

The event is structured so that visitors can book a 30-minute session with an expert of their choice, visiting a range of people and topics over the course of an evening. Hannah Hurtzig, the Berlin-based curator and dramaturge who began organizing the Blackmarket in 2005, calls it an ‘installation with over 100 experts’ – though the number varies as it travels. Working under the auspices of the Mobile Akademie, Hurtzig and her collaborators identify local experts according to a vaguely site-specific theme: Vienna’s last year was ‘Guilt’; this autumn Jaffa’s was ‘Invisible and Ghostly Knowledge’.

The crucial part that spectators play in animating the Blackmarket marks a significant difference with other participatory works. Hurtzig’s theatre background is clearly an important influence here, though a complex one. A good part of her career has been spent involved in a German tradition of experimental drama focused on upending theatre’s representative illusions. Groups like Rimini Protokoll engage the audience in unscripted conversations – not with actors but with call-centre employees and politicians; director René Pollesch has readers dash through scripts as quickly as possible, so as to short-circuit any possible empathic projection on the part of the listener (he is present at the Mannheim Blackmarket, offering sessions titled ‘Man is only truly human when he sings’). Berlin’s Volksbühne, where Hurtzig worked briefly, is known for assaulting theatrical illusions with real food and the illusion-sustaining capacity of the audience with extremely long performances. It’s no coincidence that the alienating Kasse is the element of the Blackmarket that most closely resembles a stage. Hurtzig’s Blackmarket is uncommon among participatory art works in that it is conceived as a performance; but to leave it at that is imprecise. What makes the event distinctive in the art context is that it’s organized according to an uncommonly subtle appreciation of how performance figures in communication, in social interaction generally. Hurtzig doesn’t so much attack the theatrical conventions that mystify actors on stage, as manipulate them to redistribute the mystique more equitably. (from FRIEZE – published on 26/07/09 by Alix Rule)

The MOBILE ACADEMY BERLIN is the successor of the international Theatre Academy Ruhr that was held in Bochum in 1999, and has now been moved to Berlin with a new thematic focus. The model of the Academy combines interdisciplinary course work with fieldwork, theory and activism. The MOBILE ACADEMY not only teaches techniques and methods of actual art production, but also experiments with strategies to avoid art and artistry: Learning always means to confront ones own prejudices.

[singlepic id=243 w= h= float=right]Fake Lore – Who’s That Girl? In the 1960s, Fake Lore was an American “battle cry” employed field-specifically in a scholarly controversy ABOUT true folklore, the “real stuff”. Fakelore meant fake folklore. Hard to say what the “real stuff” ever was; deep in provincial Hesse, the Brothers Grimm discovered and wrote down the genuinely illiterate woman’s oral narrations of fairy tales. Although it soon came out that this was actually a well-read, upper-crust lady whose native tongue was French, the myth of Grimm’s Fairy Tales as a German folk national monument remained uncontradicted. Current research is more concerned with the production, the societal function, and the acquisition rituals of folklore, and that means asking whose nostalgic expectations and wishes attribute credibility to a particular cultural expression – despite constantly quoting, faking, and copying cultural forms. We regard the band Kraftwerk as the real German folklore!

Let’s define fakelore for the Mobile Academy as an urban, synthetic construct made of invented traditions, counterfeited and cobbled together, often of short duration, and needed to generate urban identity: An urban folklore in the societal gap between the normality of everyday culture and nationalistic pathos, between ethnic identity and the ideologization and mystification of the Other.

In teaching sessions, practical tasks, field research, activities, and presentations, the Academy will investigate some of the critically lacerated slogans that we associate with fakelore: identity, authenticity, collective authorship, national values, and handicrafts, and travestize them in an (artistic) operable process. The result will be dramatic scenes, musical performances, advertisements, staged tours of the city, video clips, radio plays, and interventions in the urban space.

A lecture program delves into the mystification of formerly revolutionary movements as patriotic pop folklore, the return of apocalyptic biblical visual worlds in contemporary representations of war, the influence of voodoo culture on American pop culture, the cultivation of the mythos of traditional trademarks like Mercedes Benz in India and Africa, and the recycling of tribal symbols in mass-produced Nigerian video soaps. The program offerings include group visits to performances and artists’ studios, as well as tours of the city that focus on the topic of homeland/outland, especially conceived for the students and conducted by experts on Berlin. The site of the Academy is the Hebbel am Ufer, an “international theater-combine in Kreuzberg district that opens itself up to urban reality and creates space for the modes of expression of the various national communities”. The Mobile Academy is an international meeting place and network, a camp, and an actionistic concept operating in the city. About 150 participants comprise a temporary “imagined community” that, in three weeks, will create an image of itself and produce “real stuff”. (from the website)

Exhibition of the KIOSK archive Space Control I and extending the archive with the Perimetric Dictionary: six 20 minute discussions with experts on space control in Berlin.

Total Space: The US Patriot Act
Audiovisual presentations and lectures on the militarization of space

Starting point is the so-called US Patriot Act, an anti-terrorist law that came into force as a direct reaction to the attacks. It was passed in October 2001 by the American Congress. The act provides for far-reaching extensions in the competency fields of investigators and secret service agencies as well as radical cuts when it comes to citizens’ liberties, especially in the fields of data privacy protection and the protection of minority groups.

The Patriot Act is the basis for a comprehensive militarization of public space, adding to the effects of the security discourse that has been taking place in the last few years and the urban development results that have come from this discussion (as in the gated communities).

The global “War on Terrorism” leads to a paranoid situation, an “optimal degree of fear” that is used to justify authoritarian structures and a rehabilitation of the military on a mass cultural level.