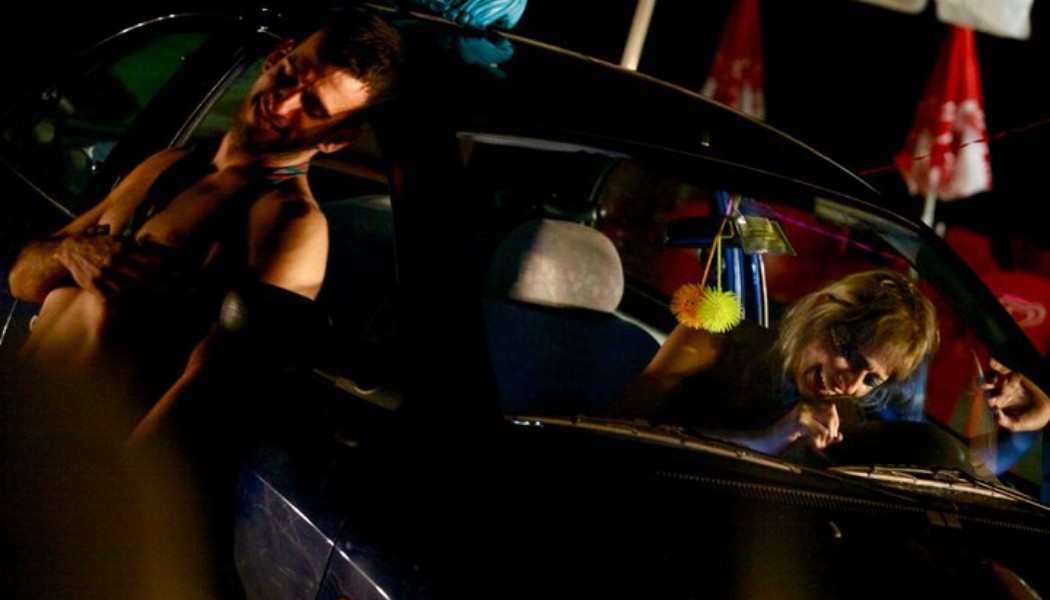 Ricci Forte was formed at Silvio D’Amico’s Accademia Nazionale D’Arte Drammatica/Rome and at New York University, they studied writing with Edward Albee. They won drama awards such as: Premio Studio 12, Oddone Cappellino, Vallecorsi, Fondi-La Pastora and Hystrio. They represented Eliseo Theatre/Rome at the first edition of ExtraCandoni Festival. “troia’s discount” was shown in 2006. The first stage of the project “wunderkammer soap #1_#2” was launched at the Festival Quartieri dell’Arte 06. They were invited by the French Embassy for Face à Face with Olivier Py. In June 07, “mare in catene” was produced by Biennale Danza/Venezia, in partnership with La Scala/Milano. They are part of the Osservatorio Critico for Scenario Award. They presented “metamorpHotel” and the second stage of the “wunderkammer soap #3_#4_#5” at the International Festival Castel dei Mondi 07. The debut of “100% furioso” took place at Castel dei Mondi Festival 08. During the season 08/09 “ploutos” (directed by Massimo Popolizio and produced by Teatro di Roma) was awarded with the Critics Prize as best drama at Biennale Teatro/Venezia. In October 2009 “abbastarduna” (directed by David Bobée) was presented at Théatre des Bernardines/Marseille. “macadamia nut brittle” debuted at Garofano Verde 09. As a coproduction with CSS/Udine, they presented “pinter’s anatomy”, December 09. “troilo vs. cressida” (from Shakespeare) debuted at Spoleto’s Festival dei Due Mondi in June 2010.  macadamia nut brittle debuts at Garofano Verde Festival. As a coproduction with CSS/Udine, they present pinter’s anatomy. In 2010 troilus vs. cressida (from Shakespeare) debuts at Festival dei Due Mondi/Spoleto and the performance some disordered christmas interior geometries at Fondazione Alda Fendi/Rome. grimmless (with the support of Teatro Pubblico Pugliese) and the study of imitationofdeath (in coproduction with Centrale Fies Festival Drodesera) debut in 2011. Directed by Simon Delétang, macadamia nut brittle is presented at Espace Malraux Scène Nationale/Chambery. The full project of wunderkammer soap, coproducted, is at Romaeuropa Festival.

This present time. The sacrifice for love of two casseurs, Euryalus and Nisus.

Three women, Dido, Creusa and Lavinia, linked by an accidental encounter with the same man. Ragazzi di vita who have not fulfilled their destiny and dropped out. Creatures of the night. For all that remains is a thin handful of those unlit hours – that instant where everything can happen  as they embrace unconsciously the halting posts of their road to Crucifixion. Then, straight down. Towards hell. With no stopping places. Grasping onto Medusas driftwood against the backdrop of a shopping mall. Down. Deeper and down. Reaching the final exhaustion point of the will to live. To a point where, perhaps, they live life for the first time.

The only path possible is the repeated doom of certainty. Dido, Faust, Tamburlaine, Edward II, Hero/Leander are people that paid dearly for their freedom to stand out from the crowd. This is the starting point of wunderkammer soap. Like all good TV soaps, it lasts 25 minutes, five micro-dramas inspired by the Elizabethan universe of Christopher Marlowe, disturbing, ferocious like an existentialist haiku, played on repeat to a handful of select voyeurs. Parallel voices. Classified bodies. Infiltrating the very core of modern middle-class homes – in the bathroom, kitchen, bedroom, living room and garage. Like enormous glass containers with foetuses to observe or human acquariums where the dark heart of the actors beat in time with those of the audience… because, after all, in a tragedy it is only an accident on the way that establishes who is the spectator and who the protagonist.

We do not know what truth is… the most important thing is that ambiguity is clear.       In an age of pre-cooked passions and fashioned feelings we gorge ourselves with Dennis Cooper stories and the rough poetry that fills up his universe. With a Mozart-ish impudence we tell a cruel fairy-tale about adolescence. Our work is interwoven with the themes which are central to Cooper’s lysergic vision – life preservation based around uneasiness, inadequacy and loss. The overnight waiting of four devourers of Haagen Dasz ice-cream (macadamia nut brittle, as in the title), sitting in a hospital, on an airplane or in a tree house, who have the choice to discover themselves as they are – or to reinvent themselves and run the risk of losing control. We are victims, executioners, protagonists in this snuff movie that life offers, in desperate search of love in an impossible world where, at the end of the day, Nature, like men, is a bitch and unfaithful.  Always.

Claustrophobic space_violence_ambiguity_domain_time discontinuity: obscure past/lying present. Pinterian tools to scan the game that erase the untouchable edges of relationships. Memory is a refuge, the Alliance Ark, an operating table to sew up the subjective truth, where lies are normal. Human topographies, parked next to a checkpoint, analyzed under an inhospitable neon lights that show the contemporary weakness. Our devious nature is a frozen crust where we skate in loop and we don’t care that time melts beneath our feet every kind of compactness. Every kind of difference. The semiotic manipulation process of passions is not completed. The dissected death bodies of what we were come to light again. NOTICE: looking for a nylon lawn, even a second hand one, for an homologative definitive burial.