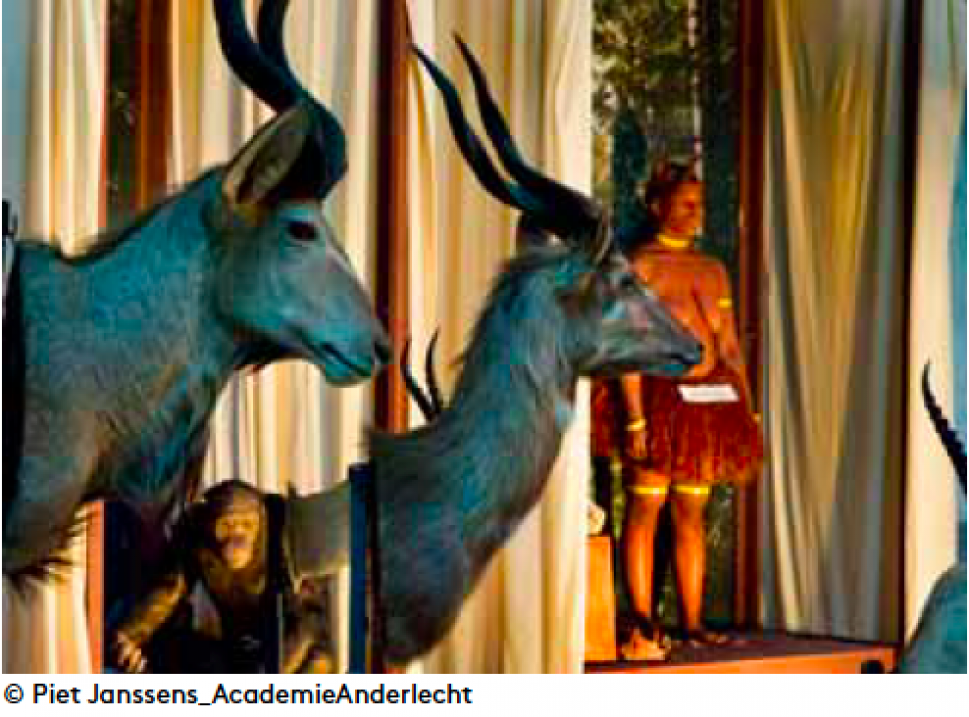 Earlier this month I saw a piece by South African Artist Brett Bailey and it continues to disturb me so I reckon it’s time to blog about it. The piece, part of the Berliner Festspiele Foreign Affairs festival, is a work titled Exhibit B and recreates the unthinkable “human zoos” of the 18th and 19th century with teh intent of shining a light on the ruin of colonialism across Africa. It took place in the eerie, beautiful, catacombs of the Kleiner Wasserspeicher, an ancient water tower, now haunting art gallery and performance space. The brick bunker of the Kleiner Wasserspeicher, built beneath a hill, has petal shaped rooms that curve into one another. The space is cold and dark, but was breathtakingly lit for this production. The rooms were fashioned as museum installations and spectators meandered from exhibit to exhibit, which ranged from an 18th century Herero woman chained to the bed of a colonial officer to a contemporary Namibian man, recently immigrated to Berlin, standing on a shipping pallet. To witness, the piece was brutal, extremely uncomfortable, gorgeous, devastating, inspiring, humbling, and game changing, both artistically and ethically.

In the round center room of the brick walled bunker hung three historical photos of the severed heads of African men and women. These remains had been part of gruesome racial experiments, which eventually gave the National Socialist Party of Germany the ‘ideological and scientific’ justification to carry out the Holocaust. Beneath the photos, four heads of a Namibian choir ‘floated’ atop four columns. Colonial style chairs were set in front of them, allowing you to stay a while and listen as they sang the most heartbreaking four part arias.