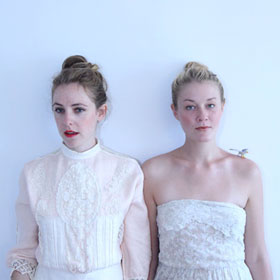 Writer/director Tina Satter draws on Chekhov’s letters, translations, and perverse sense of comedy to consider anew the darkness, beauty, and history of Chekhov’s iconic play The Seagull and its resonances with her Half Straddle ensemble. Seagull (Thinking of you) is a personal look at performance, failure, and attempted love — ultimately an unexpected meditation on why we ever try to say something out loud. With a Russian folk metal-influenced score.

“If you think experimental, deconstructionist experimental theater must be dry and dreary, then Half Straddle has a surprise for you.”
The New York Times

Commissioned by PS122, co-presented with The New Ohio Theatre

Radiohole was birthed in a Brooklyn basement in 1998 by Erin Douglass, Eric Dyer, Maggie Hoffman and Scott Halverson Gillette. The company has produced ten original shows that have been presented at venues around New York City including PS122, the Kitchen and the Collapsable Hole (sic) and have toured nationally and internationally. Radiohole’s most recent show, “Whatever, Heaven Allows” was commissioned by PS122, The Walker Art Center and the Andy Warhol Museum through the Spaulding Gray Award. “Whatever, heaven Allows” had it’s European premiere in April 2012 at Katapult Teater at Godsbanen in Århus, Denmark. Over the years, Radiohole has earned a reputation as one of New York’s most tenacious and uncompromising ensembles.

Radiohole is a recipient of the Spalding Gray Award, and has appeared at PS122 with Whatever Heaven Allows and Fluke.

Co-commissioned & presented with The Kitchen

Peggy Shaw has always had a host of crooners, lounge singers, movie stars, rock and roll bands, and eccentric family members living inside her. Ruff is a tribute to those who have kept Shaw company over the last 68 years, a lament for the absence of those who disappeared into the dark holes left behind by her recent stroke, and a celebration that her brain is able to fill the blank green screens with new insight.

“Truculent and funny, swaggering and sensitive, Shaw is extraordinary.”
The Times of London

“Shaw’s obsession with bones, with origins and what lies at our core is what drives a powerful hour of deeply personal probing… I sincerely urge you to spend an hour in the hands of a genius.”
Edinburgh Festival Magazine

“Exquisite… This is open-heart surgery of the artistic kind, performed without anaesthetic.”

SPLIT BRITCHES was founded by Peggy Shaw and Lois Weaver, together with Deb Margolin (veterans of Hot Peaches and Spiderwoman Theater), in 1981 at NYC’s WOW Cafe. Shaw and Weaver have become known for “a long line of smart, thrillingly well-executed performance pieces” (Katherine Dieckmann, The Village Voice) and “tough intellectual and verbal content (John Hammond, The Native). Peggy Shaw has received Obie Awards for Dress Suits for Hire (1987) and Menopausal Gentleman (1999). Split Britches won two more Obies for ensemble acting in Belle Reprieve (1991), a collaboration with Bloolips that was a reversed-gender version of A Streetcar Named Desire. Shaw and Weaver also create solo shows; You’re Just Like My Father, Menopausal Gentleman and Faith and Dancing (Shaw); Mapping Femininity And Other Natural Disasters, What Tammy Needs To Know… and Diary of a Domestic Terrorist (Weaver). Split Britches is currently touring with their newest productions: Miss America and Lost Lounge. ( www.splitbritches.wordpress.com)

Peggy Shaw is a recipient of the Ethyl Eichelberger Award and has appeared at PS122 with To My Chargrin, and as a part of The 30th Anniversary Season Gala.