By Caden Manson (Editor In Chief)on May 4, 2013
Comments Closed 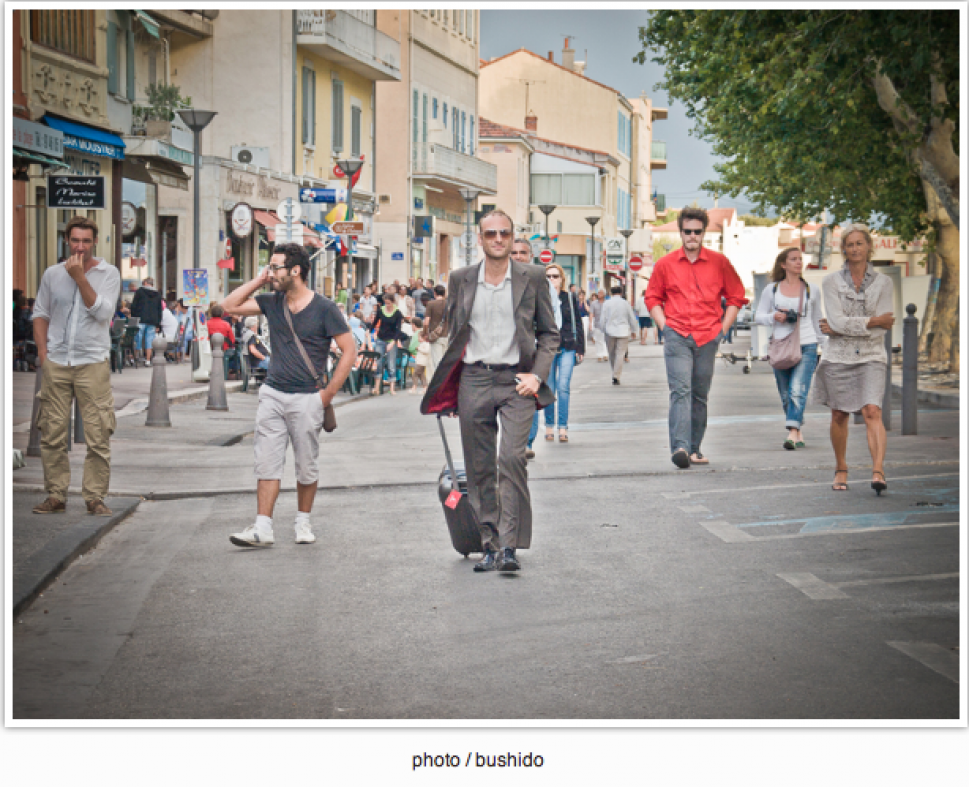 Hidden Stories / Histoires Cachées is an invisible performance, a site-specific event that blends itself into the urban landscape. Supplied with headphones, the audience is temporarily endowed with the powers to hear the thoughts of certain passers-by and to follow them into the unknown. A single rule of thumb: follow an ordinary object (an orange, a newspaper, a box of matches, or a pen) as it makes its way through the streets of the city. Like stepping into a film that mixes fiction with reality, the audience embarks upon a rare and poignant adventure.

Text Written by the ensemble. Excerpts from Maniére by Joel Bastard (editions Galinard)

Begat Theater seeks out innovative ways to frame the work of contemporary authors within the context of public space. Blending elements of performance art, environmental street theater, visual art, and sound installation. The company develops new forms of dramatic writing that place their audiences in an active role, intimately close to the actors. The boundaries between fiction and reality are blurred. At the origin of each project, a powerful and original story is adapted from a contemporary novel or several novels. Human diversity and the ambiguity of communications are recurrent themes, with the solitary characters who inhabit the margins of society. Begat theater invites a fictional world, allowing them to glimpse the strange beauty of a new, displaced perspective. The company reinvents theatrical codes with each new piece they create.

Produced by WAXFACTORY and funded in part by THE FRENCH AMERICAN FUND FOR CONTEMPORARY THEATER / étant donnés: The French-American Fund for the Performing Arts, a program of FACE (2012) and Institut Française – Région Provence Alpes Cote d’Azur

mars2bklyn / bklyn2mars is an ongoing platform for collaboration and discovery between artists and cultural venues from Brooklyn, New York and Marseille, France. Curated by CLAIRE HALLEREAU, ERIKA LATTA andBERTIE FERDMAN.

Brooklyn is to Manhattan what Marseille is to Paris: a large, prodigious, liberal, exceptionally diverse, and slightly rebellious, melting pot with strong social and cultural contrasts. As both Paris and Manhattan get more clogged and artists priced out, a shift in what is the center of creation is in the making. Brooklyn and Marseille no longer represent the “outskirts” or “the margins” of some other place: they have themselves become the centers of artistic and cutting edge innovation.

mars2bklyn / bklyn2mars aims to highlight these centers of creation, draw parallels between them, and initiate links between the two cities, within the context of an ongoing platform.

The platform will offer performances, concerts, and exhibitions, as well as panel discussions in both cities. It will initiate collaborations between artists, venues, residencies and curators from the two cities, and commission artists to inspire themselves from the ‘other’ city.

The platform will focus on artists whose work blends cultures, and integrate the essence of their city or neighborhood, or one particular aspect of it in the work. The objective is to bring about collaboration between these two port communities and highlight the locality of each city via the arts.