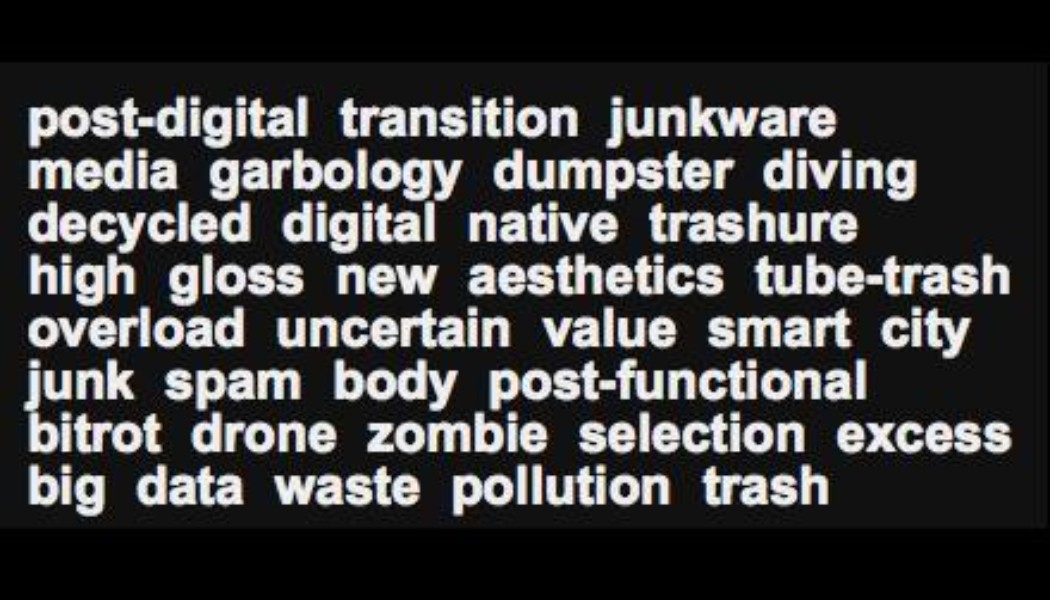 Transmediale is a Berlin-based festival and year-round project that draws out new connections between art, culture and technology. The activities of transmediale aim at fostering a critical understanding of contemporary culture and politics as saturated by media technologies. In the course of its 25 year history, the annual transmediale festival has turned into an essential event in the calendar of media art professionals, artists, activists and students from all over the world. The broad cultural appeal of the festival is recognised by the German federal government who supports the transmediale through its programme for beacons of contemporary culture.

THEMATIC FRAMEWORK
In the wastelands of its aftermath, what is still burning?
With the theme afterglow, transmediale 2014 suggests that in a world where resources (human, bodily, material, environmental, economic …) are more and more used up, the digital does not any longer stand up to its promise of antiseptic high-tech worlds and opportunities for all. On the contrary, digital culture is more and more becoming a post-apocalyptic wasteland ruled by a few powerful clan leaders. Still, digital culture is full of things that shine and glow, both promising and uncanny: from social media to big data. On the one hand, this afterglow can be seen as an extreme expression of the wasteful state of digital culture (excess, overload, endless repetition, pre-emption of meaning, exploitation), but on the other hand, as “one man’s trash is another man’s treasure”, this afterglow is also providing the transition to new forms of being. If we are living in a post-digital culture, then afterglow is what characterises its aesthetics and politics during the transition to new cultural forms that are still unknown to us.

In the 2014 edition of the transmediale festival, the idea of an afterglow of digital culture is taken as an opportunity to speculate on positions that lead beyond the digital: not beyond the digital in a literal sense as in doing away with digital technology, but beyond the digital as a metaphysical character that overcodes all forms of existence. Even a supposedly critical term like “post-digital” is in this sense only promoting an idea of the contemporary and of the future as predetermined by the digital. Instead of revelling in the hypes of the post-digital, we invite the contributors of transmediale 2014 to reflect on this afterglow: to exploit our nostalgia for the pre-digital through the use of trashed technologies, ideas and narratives and/or to imagine new modes of existence and new modalities of critical intervention, by junking the afterglow of digital culture.

SUBMIT YOUR WORK — DEADLINE: 31 JULY 2013
transmediale 2014 afterglow will take place from 28 January to 2 February at the Haus der Kulturen der Welt, Berlin. The programme will feature a diversity of different types of work in a thematic exhibition as well as film and video screening, workshop, performance, and conference programmes. transmediale is always interested in works exploring our complex relation to technology, be it through new or old media. The exhibition programme is particularly oriented towards artworks that explore ambiguous relationships to technologies and their associated cultural paradigms, proposing both speculative and inventive positions. The video programme is devoted to contemporary artistic video works and experimental film screenings with historical points of reference. The performance programme ranges from live audiovisual work and interventions to performative lectures. The conference and workshop programmes explore the critical dimension of networking, hacktivism, media theory and the politics of technological development.

SELECTION PROCESS
Even though the themes of the transmediale are set by the curatorial team, the focus of the individual programmes is developed further in relation to the works submitted for this call. In this way we strive to create a dialogue between the thematic ideas and current artistic practice. The final programme of the festival eventually consists of a mix of invited participants, projects of our all year platform (reSource transmedial culture berlin) and contributions selected through the call. Notification about the inclusion in the programme of the festival may take up until November 2013.

Before submitting your work, please read our conditions of entry closely.

Go to our online submission form to submit your work. Unregistered users need to create an account. Existing users need to log in. The final deadline for handing in your submission is 31 July 2013. Please read our conditions of entry closely before submitting your work.