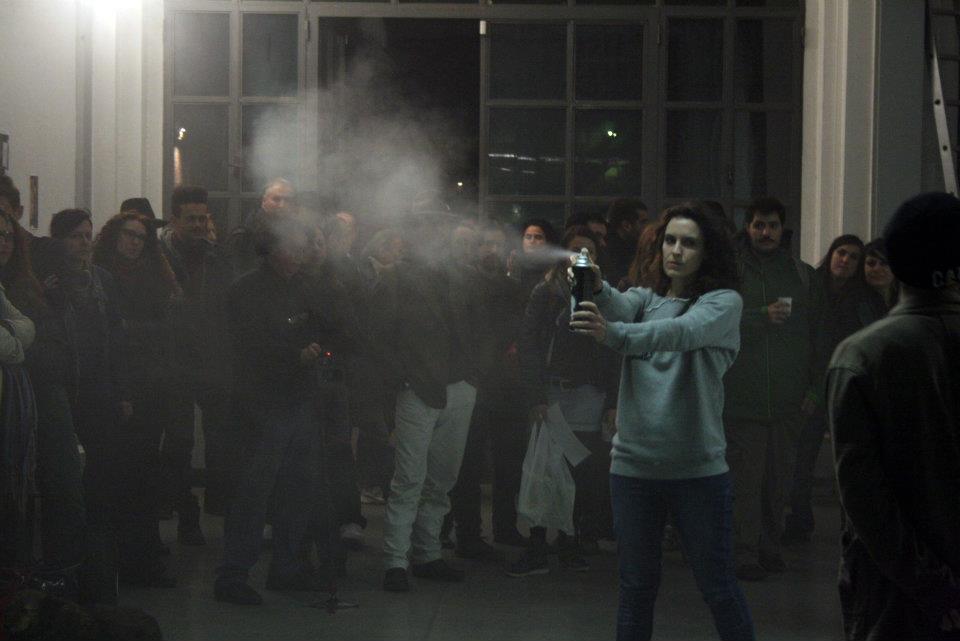 Artists Rugiada Cadoni and David Liver have worked in the video and performance field for over ten years in Paris.
Y Liver is a contemporary art duo created in 1999 by David Liver (born in 1977 in Le Havre) and Rugiada Cadoni (born in 1977 in Lecco, Italy). Y Liver’s work spans video, performance, spoken word, writing, drawing and installation. In addition to its guerilla-style artwork and its unorthodox performance pieces, which involves everything from interacting with strangers to graffiti, Y Liver is well known for its manipulation and perversion of languages, inspired by politics, ancient religious scriptures and other personal hand-written texts.

Opie Boero Imwinkelried: Could you explain the name of your duo Y Liver?
Y LIVER: Yes. The name came up with our first performance. We didn’t want to put our names one after another like Liver-Cadoni or something like it, and a friend of us who was fascinated by alchemy, kabbalah and all, suggested Y Liver, because the Y refers both to copper, which allows the alchemical transformation, and to androgyny, where Y represented a body with two heads, one of a beautiful woman and the other of a bearded man. A long tale full of mysterious symbols but we will cut it short: Y Liver it’s like a firm name who refers to the ideas of ambiguity and contrast.

OI: Please tell us about your work.

YL: Well, we work in the conceptual field, making use of art in order to experiment with the modalities and mechanisms of the storytelling, which is a vast and therefore vague concept to explore. So our art was developed around the role of narrative in contemporary culture, the constructions of the identities and the relationships between the emotional landscape and history. Our work tries to research the boundaries of individuality through performances, writings, videos, and photographic material, discussing the essence of the artistic practice, which basically involves the conditions of expression. The result is a contrasting mix of cold conceptual esthetics with a warm first-person fictional work.

YL: We clearly followed the path traced by the contemporary art and its establishment, so we were in touch very early with the art world. We had collaborated with big galleries as much as with smaller ones and this relationship has not always been easy. On the one hand there is the gallery with its conventions and its needs, on the other hand we have an intellectual production focused on the performance and its issues. That brings up some personal and distressing contradictions. However, the point is to know to which of the stories one refers and find its own coherence.

YL: The title has two parts. The first one, “Crisis what crisis” was Jerôme’s idea. He is the gallerist and he loves to come up with titles for the shows, which is a first curatorial act. “A pathetic drama for works of art and lack of creative enthusiasm” was the second part of the title and the very curatorial act of that show. We have always been so meticulous with the titles for our projects, that they became works of art in their own right, so we decided to sell them. Nobody bought them so far. This title also suggests the way we should look at the event: as a pathetic playwriting where the actors are works of art in struggle with a certain lack of enthusiasm. We work the exhibitions as if they were theatrical pieces.

OI: Some people say that certain artwork is apolitical. What do you think?

YL: How can anybody be apolitical? That’s like being lost

in the desert but convinced to be on a luxurious armchair watching a scientific topic on dehydration. One should never mistake the lack of critical sense with an inevitable attitude. Even a merely commercial or the most intimate of the artworks, carries with it some political content and shows a specific position.

OI: How is your work political?

YL: Perhaps it’s because of the way we manipulate an entire vocabulary borrowed from history and usually referring to cultural architectures. We use this vocabulary with a certain frailty, as it appears to us, so that it looks pathetic, revealing its gray areas. Also, We choose these terms, sometimes actual words rather than images for their evocative power, in order to compose with them some conflictive ideas and ethical short circuits. In the end, “the political” is a problem of aesthetics and its language should be emblematic. Being recognized as performers it’s also a way to bring up some political issues

OI: What kind of public would you ideally like to reach?

YL: The audience is not our business. Most people usually mistake the target for the substance. All the time! Every once in a while there is a fair appraisal. People need demonstrations, and they also like to look at an artist make a fool of himself. Anyway, assuming that we consider art as provocation, the paradox is that of course we would like to be esteemed by the artists that we esteem, but our ideal audience is the one that doesn’t share our principles. Which is to say that the people we love is not our favorite target. The truth is that there is no public to provoke if not ourselves, in this sense the public is the first of the provocations and that’s the king of all angers.

OI: If you were given a fairly large amount of funding; let’s say half a million euros, what kind of work would you make?

YL: Your question is so yummy ! Seriously. Ok, there is a film but …

OI: You have shown your work widely in Europe. How does the French experimental art field compared with other European countries you are familiar with? Could you tell us about funding, venues, public or other aspects you consider to be relevant?

YL: Our feeling is that in France it is difficult to build a career, regardless of the institutions. We are not saying that there is a programmed cultural control by the institutions, but that there is some intervention, eventually. This is quite common in the latin world, which is more respectful of the cultural establishment. French institutions are self-referential, very shy in terms of provocation and therefore conservative. They protect the values of our civilization which include the rational, the quiet, the cool and the decorum. This makes french art really French and gorgeous.

OI: Any advice for artists starting their career in France?

OI: What are Y Liver’s plans for the future?

YL: Moving to Bruxelles is the first plan and it’s coming along fine. Then we are going to have some solo exhibitions during the next fall and winter. The first one is very important for us in terms of friendship. It will take place at the LEM, a young gallery in Sardinia. This is a project curated by our mummy Giuliana Altea who supports us since the very beginning. The following shows are going to be at Weltecho in Chemnitz, Germany, From the hungry i, Lenny Macbetto, with a performance at the museum of contemporary art. Then at Estace in its german space in Leipzig and again at the Nivet-Carzon in Paris. We will also perform for FRASQ at the Générateur in Paris. Starting from January, Y Liver will be the art director of the tiny Nivet-Carzon gallery, this is very exciting and we are going to present a very hot program under the name of Liver/pool.

OI: Is there anything else you would like to add?

YL: Yes, Thank you for this interview.