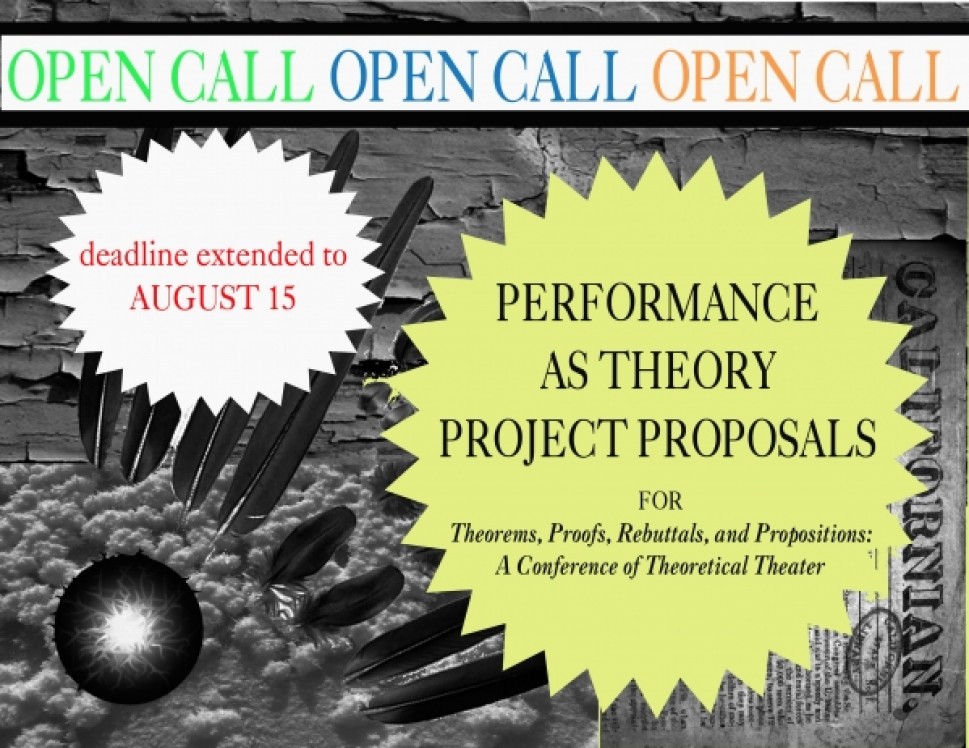 THE NEW DEADLINE IS AUGUST 15

Through this Open Call, four performances/theories will be selected by a peer panel. Over the course of three months, the conference organizers will provide space and other resources to these theorizing projects. Click HERE for more information.Performance-makers/theorists need not have any theater or formal artistic background, but must propose to use the form of performance to propose a theoretical position or question. The process of performance-makers/theorists is likely to resemble the following:1.) Theorist approaches a question, hypothesis, or problem/paradox
2.) Theorist researches the question, tests the hypothesis, or re-creates/makes evident the problem/paradox
3.) Theorist answers the question, proves or disproves the hypothesis, or formalizes the problem/paradox AS A PERFORMANCE.

Each project will be paired with a critical writer (an arts writer, philosopher, cultural critic, etc), who will observe the process of creating the presentation and be in dialogue with the theorist, becoming the first formal respondent to that work. This first stage of production will culminate in a conference weekend in New York City, during which conference participants will gather and the four projects will be performed. In Stage 2, panel discussions lead by the four critical writers will follow each performance, and conference participants will be invited to consider and discuss the presentations via various political, theoretical, and analytical contexts of their choosing. All participants in this public weekend conference will also be invited to submit written responses to be published in a hard-copy Gazette and online; these written documents constitute the third stage of the project. Stage 4 will consist of a final day-long public discussion that will consider the written responses and previous discussions. The entire process will be documented and excerpts made available via online or print publishing after the event.

Theorems, Proofs, Rebuttals, and Propositions: A Conference of Theoretical Theater began with the simple conception of “theater” as a public site for insight (in Greek, theater means ‘seeing place’), tied intrinsically to theory or ‘ways of seeing.’ This conference is based on the premise that performance is not just an artistic medium, it is also a vast and complex conceptual/ philosophic structure (multiplicitous, logarithmic, exponential, quantum). We posit performance as an “uncanny social science,” a way of researching human social experience by being it, by encompassing, constructing, simultaneously causing and being caused-by business, community and kinship conceptions, systems of definition like gender and race, political and intuitional constructs, and so on. There is no praxical division between academic fields of inquiry. Modes must be researched and developed by everyone, across artistic mediums, across social and “hard” sciences, across daily living patterns, across conversations and other communications.

The project seeks both to recognize, theorize, and authorize performance-making as a constructive theorizing and envisioning act that may have the agency to escape autonomous artistic spheres and participate in co-construction of public discourse and, as a performance project itself, to invent, theorize, test, bend, expand, and corrupt the conference’s own overarching theory and mode of production.

Applicants need not be artists or performers, nor have experience with creating performance, but may also be historians, philosophers, cultural critics, activists, scientists, or thinkers in any discipline. Similarly, theories need not be specifically theories of performance, but can be theoretical positions dealing with any aspect of time, space, causality, communication, morality, mind, body, society, being, aesthetics, politics, arts, sciences, knowledge or other major theoretical concerns that can be activated in the situation of performance. Successful applicants will propose the active mode, form, or medium of their theory, instead of simply describing their theory in a theatrical style. It is expected that given conditions of performance (not limited to venue, audience, authorship, shared temporality, etc.) will be utilized or subverted in order to instantiate a theoretical position.In addition to a theory, questions, mode of research, etc, prospective theorists/performance-makers should request the materials and resources they need to develop and perform their project, and be as specific as possible in describing their intended project. Applicants must be available during the times specified in the timeline.

Four proposals will be chosen by a small interdisciplinary panel of jurors based on cohesion of vision and feasibility.

1. On the top of the first page, please include the following information: Name, Address, E-mail, Phone number, Website (if applicable)

2. Please send a proposal (less than 2 pages) for a theoretical performance. Please be as specific as possible. Proposal guidelines are purposefully vague in order to allow for a multiplicity of approaches.

3. In a separate paragraph, please attempt to foresee technical requirements, spatial/architectural needs, and other anticipated necessary materials for your proposed project.

Please email your proposal as an attachment, along with a CV, resume, or narrative biography (up to 500 words).

Both individuals and groups are welcome to apply. Send your application to theatertheoryconference@gmail.com no later than August 15, 2012.

The form of this conference is unusual, and it seeks to engage an interdisciplinary community of thinkers. Therefore, you may have questions about one or more aspects of the conference or the call for proposals. Please do not hesitate to e-mail us with your questions, requests for clarification, or comments.

Theorems, Proofs, Rebuttals, and Propositions: A Conference of Theoretical Theater is a project of Esther Neff (Panoply Performance Laboratory) and Yelena Gluzman. The conference is a project supported through Culture Push’s Honorary Fellowship for Utopian Practices. Click HERE for more information.

Call For Papers: The Embodiment of Authority – Perspectives on Performances