In Performance: Mats Staub- Death and Birth in My Life at Santarcangelo dei Teatri (Italy) 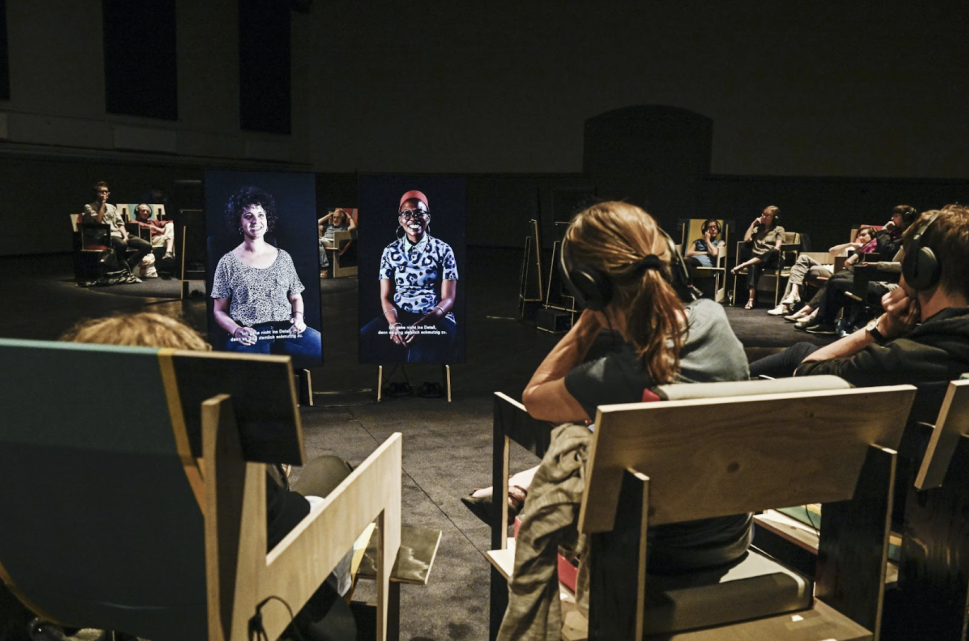 Mats Staub is an artist based in Berlin whose work lives at the intersection of theatre studies, journalism, film, and exhibition. He identifies as ‘a traveler through the realms of memory.’ His piece ‘Death and Birth in My Life’ explores how certain births and deaths have affected him, specifically the death of his brother and the birth of his nephew. He explores these impacts through a series of interviews with people who have also experienced life-altering death and birth/rebirth–intentionally stepping back and not featuring himself as a participant in the narrative. Though through those he interviewed, we always feel his presence. In Santarcangelo, he is showing a number of films of mainly unedited interviews with people who have also experienced life-altering death and birth. These films are shown in private homes throughout Rimini and Santarcangelo.

I viewed the piece in a home off the main square in Santarcangelo. I was brought upstairs to a small room where I was offered water and fruit while I waited to be ushered into the next sitting room. I took my seat with four other people behind a small table that housed a bluetooth speaker and projector. A festival employee selected one of two options on the projector and in this small dark room, the five of us listened to two women share their experiences with grief and childbirth and share their philosophies on the passage of life.

The interviews were filmed with two cameras and are projected split screen on the wall so we see both the person speaking and the reaction of their companion throughout the entire exchange. They spoke about what they knew about their own births, and the grief they hold for parents, children, and friends who have passed.

The whole experience is similar to that of a wake and sharing stories of those who have gone and the impact they have had on us.

Marisa Conroy
Marisa Conroy (they/them) is a New York-based, San Francisco raised and Dublin-trained multidisciplinary artist. Their work combines AI-generated media, haunting sound design, and live audio mixing filtered through the human body. They’re interested in exploring the interstitial spaces where words, concepts, and imagery are lost in translation. Their current obsession is figuring out how to perform the action of AI processing live on stage through the body. Their work is radically queer and unexpectedly scientific. They hold a BA in Theatre and Performance Studies from UC Berkeley and is an MFA in Theatre candidate at Sarah Lawrence College. Recent line producing credits include The Care Cafe facilitated by Lois Weaver for Anu Productions, NY Pops Up, a six month initiative through the NY Governor’s office to bring the arts back to NYC during the COVID 19 pandemic, Live Collision International Festival 2020, and Curran Under Construction SF (2016-2016). Creative Producing credits include GirlPlay by Sarah Richardson (****The Stage), Initiation by Matthew Bratko & Frank Sweeney (Dublin Fringe Festival 2020 Commision), GAA MAAD (Dublin Fringe Festival 2019 Commision), SAUCE (***** The Irish Times). Website: marisaconroy.com