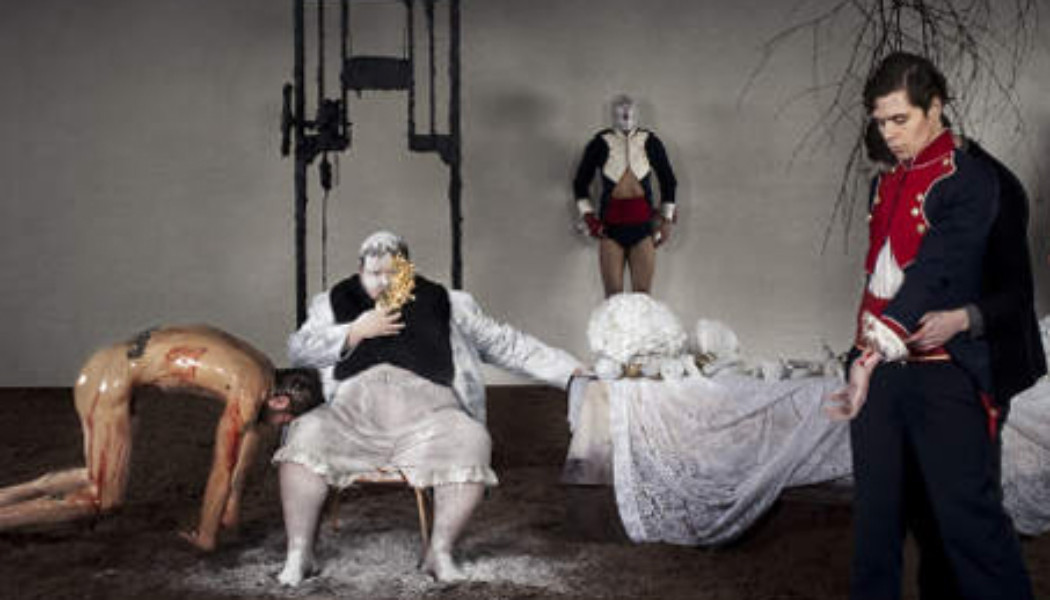 DonauFestival 2010
FAILED REVOLUTIONS or
IS THE ANAESTHETIC SIMPLY TOO STRONG TO WAKE UP THE DAMNED ON THIS PLANET?

The Donaufestival is an annual festival of music and performance that takes place each April in the Austrian state of Lower Austria. The festival tends to showcase avant-garde rock, performance art, noise and electronica artists.

Statement from the director:

Currencies and the corresponding state entities have taught it to us: Depreciation can be created by inflation. The same goes for revolutions! Hardly any other time has spawned more revolutions than our Western late capitalist era. Advertising strategists work day and night to depreciate the notion of the revolution on technological, societal and spiritual levels by generating new ones on a running conveyor belt. Fake revolutions, naturally. They stem neither from human, and thus social, necessity, nor do they have any far-reaching consequences in societal and technological respects. On the contrary! The debasement of the idea of the revolutionary in our society goes along with the instrumentalisation of protest, revolt and anarchic excess. Anti-globalisation and environmental activists equally have their place in the system like the old leftist devotional object vendors; mohawk-styled punks (and festival organisers) like the innocuous grey-haired hippies toasting hand-in-hand with dreadlocked Twitter generation kiddies to free love with the peace pipe. Every revolutionary idea is already nipped in the bud and degenerates into a fashionable application as the fertile soil has been dug out from under its roots. But also we post-heroes in our post-revolutionary society will at one point stand up to the neck in agonising crisis floodwater. And then hell will break loose at a post-post party where the virtual cobblestones will no longer fly so peacefully through the worldwide web! Deichkind’s colourful masses are social catalytic rituals, a fusion of hysterically exaggerated hedonism with references to revolutionary gestures and symbols. At the opening, they will stage their already highly animated concert together with guests, transforming it into a discourse-operetta: a spectacle like the feverish dream of a society which in its anarchic excess might plummet into a revolution. Also the 16th century was marked by collective panic when the persecuted Anabaptists fled to Münster in order to live out their utopia. Their new society was characterised by salvation rituals, free love and mass orgies, until it was brought to the ground. Showcase Beat Le Mot use this scenario not only to bathe Hieronymus Bosch and Lucas Cranach in neon colours; above all, they reveal the Middle Ages as a laboratory of the present. Two messianic figures who relentlessly challenge traditional gender themes will infuse the festival theme with sex and revolution. Peaches will revel in her highly sexualised show with band and laser harps, and as curator she has engaged the likes of electro-beserkers Cobra Killer, the young glamour performer Theo Adams and the queer performance-party collective Ssion, amongst others. As an iconic, highly stylised art dandy, the “Gay Messiah” Rufus Wainwright has succeeded time and again in driving a spear in the flesh of mainstream American society. The immaculate messianic body appears in the midst of the illegal, queer, migrant bodies of the border-crossing cyberpunks from La Pocha Nostra and within the William S. Burroughs special, which offers a new artistic interpretation of the literary revolutionary. The artist collective Implied Violence was born in the milieu of Parenthetical Girls, Xiu Xiu, Former Ghosts and Deerhoof. Following their huge success in New York, they will be in Europe for the first time with the further development of the performance “The Dorothy K.”: a hybrid of installation, performance and happening that goes to the performers’ physical and psychic boundaries; an approach not unlike that of Julius Deutschbauer and his “Theater des Verhinderns (Theatre of Prevention)”. A performative-musical mega-project will take place in the framework of the Franz Graf exhibition in the Kunsthalle. With “Iceland Hits Danube” the artist, together with Franz Pomassl, invites important representatives from the Icelandic art network. In collaboration with the Kunsthalle, various exhibitions, installations and performances from Thomas Palme and Christian Jankowski will be realised; with the arthouse cinema “Kino im Kesselhaus” an art and short film programme curated by the Diagonale and the International Short Film Festival Oberhausen will be screened; and the Galerie Stadtpark will exhibit two installation works by the British artists Haroon Mirza and Richard Sides. At some moments the festival theme will step to the background, but only seemingly: for example, with the outward-oriented internalisation scenarios of Tindersticks, múm and Carla Bozulich, or with the psychedelic and electronic border-crossings of Panda Bear, Fuck Buttons, Dan Deacon, Max Tundra or Akufen. At other moments it will again be very present: for instance, in the case of Gob Squad who will stage a media mega-revolution with the audience in “Revolution Now!” And 400asa Sektion Nord who carry us off on a psychedelic journey through time, from the fall of the Berlin Wall and the legendary Pink Floyd concert on Potsdamer Platz through the Balkan War to the here and now. Or Alec Empire who on the occasion of the 1999 1st of May demonstration in Berlin proved together with Atari Teenage Riot that the slogan “Riot sounds produce Riot” is not just an empty catchphrase. In the company of Nic Endo, CX Kidtronik and The Ex, he will again celebrate Labour Day: “So comrades, come rally!” A re-enactment?
To a better and finer failure in Krems!
Tomas Zierhofer-Kin

Imagine that the sales assistants at H&M in Bühl Centre Krems stop working; at Media Markt customers are being left alone in the middle of sales talks via plasma screens; at Tchibo the coffee machine stops and all workers assemble in Südtirolerplatz to arm themselves with apricot schnaps and Kalmuck jackets from the local tavern. The mob keeps growing stronger, buses stop, drivers and passenger join in, together with the financial advisers and service staff of Raiffeisenbank, snack stand owners and waiters. The violent among them rob the Merkur branch in Lerchenfeld, distributing the stolen salmon sandwiches among the masses. We’re not quite there yet. But Gob Squad are making a start by declaring the revolution …

The first step has already been taken: the Stadtsaal is occupied, becoming the headquarters for these revolutionists. Access to props, and, as such, to weapons and explosives, is secured. Box office and foyer have already been occupied… without bloodshed so far. Gob Squad want to electrify the masses, using all possibilities of a large-scale media-based production: cameras, live-streams, large screens, metres of wire and wireless transmitters. This way, Gob Squad transmit their revolutionary message directly out into this world. For, the revolution is live. But where are the masses, where are the people? Wasn’t there talk of 50-60,000 extras? Gob Squad bring the revolution from the archives of history back into the present, placing it in the middle of our capitalist reality.

Together with passers-by and audience, Gob Squad reenact revolutionary actions and historic moments that have made history, also writing themselves into it, albeit not without contradictions: “We’re losing the plot, losing our way, becoming hopelessly tangled up in the maze of wealth of the Western world. We have to rethink, redefine the roles. And all that in front of rolling cameras. We have to reshuffle over and over again. Who could be that today or at least take this job? We’re collecting our thoughts, asking ourselves the same question over and over again: Who are we? What do we want? And what are we willing to do for it?”

“The world taking shape onstage is molded by those who see it, not those who are creating the world they want to see.” Theatre legend Robert Wilson brought Implied Violence as Artists in Residence to his Watermill Centre on Long Island; this is where the young American performance collective began to pull the threads for a remarkable, performative large-scale enterprise entitled “The Dorothy K” which wowed the art and theatre world at last year’s New Island Festival in New York. With the further development of their work, which blurs the boundaries between performance, dance, installation, theatre and art pop while exhausting its performers to the point of physical and emotional breakdown, Implied Violence will be celebrating their European debut at the donaufestival. With the great Hermes Phettberg as guest performer!
“The Dorothy K.” will open its gates for several hours every day, inviting visitors to a durative installation, the daily major-live-performance (see daily line-ups) as well as to a number of other actions and interventions which will be announced on the festival premises at short notice.
Collaborating closely with Zac Pennington and The Parenthetical Girls, Implied Violence has created a piece that frequently spins out of control, manipulates the flexibility and rigidity of the American moral code, exhausts its performers to the point of physical breakdown highlighting the difference between difficult, strenuous, thrashing movement and true ecstatic fits.
Zac Pennington, in collaboration with Implied Violence, has created a beautiful and menacing four-part suite beginning with “The Plague of Marcus”. These songs chart the epic fall and destruction of the principal characters in Erich Von Stroheims’ most brilliant and mysterious film “Greed”.
Text sends the audience through different phases of experience as well: as quiet, delicate explanations of the subtext of images; as a chattering and full undercurrent of action, providing highly textually choreographed moments framed by the images and actions that are sitting on top of the text; as its own narrative through-line that has nothing to do with action, image, or sound. These disparate sets of text used within the play construct complex layers of codependence that illustrate the way the characters relate to one another in their moral game.