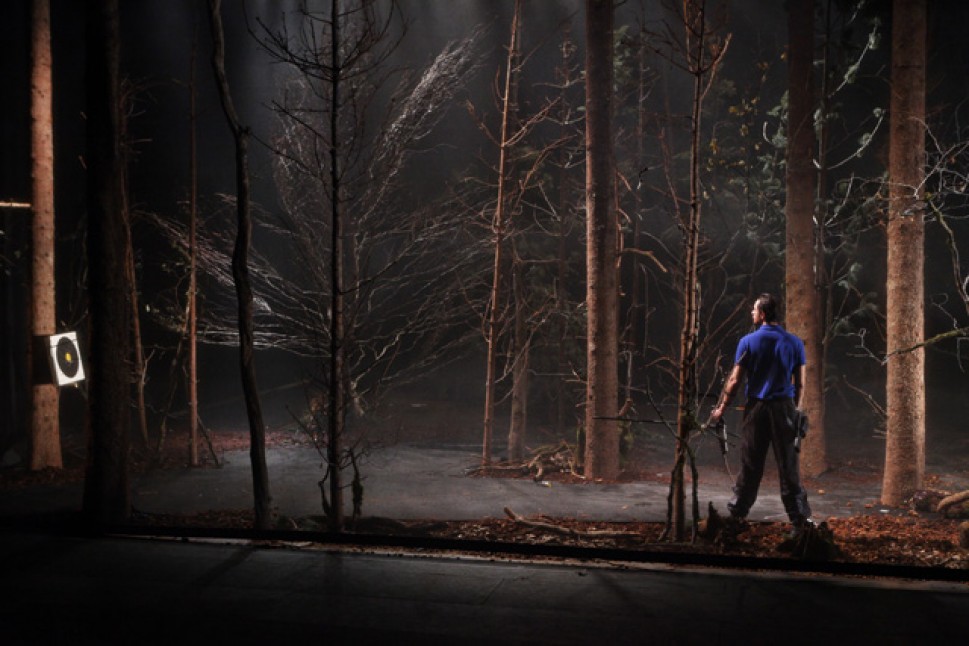 “We have conceived this 64th Festival together with director Christoph Marthaler and writer Olivier Cadiot, our two associate artists. In the course of our many conversations, we have encountered two creative minds fully immersed in today’s reality, two “anthropologist artists” of our daily lives. Their literary and theatrical writings, imbued with musicality, closely scrutinise the man of today. They live in the present and it’s the present they give us to see, mixing high brow and popular culture with unexpected traces of the past unearthed from their imaginary archaeological digs.

Both have entered the world of theatre through a dialogue with other artists. The stage designer Anna Viebrock creates spaces for Christoph Marthaler to inhabit with his troupe of actors and singers. Olivier Cadiot’s writings are brought to life on stage by director Ludovic Lagarde and his actors, including Laurent Poitrenaux.

Built in the 14th century as a symbol of religious and political power, the Popes palace, its architecture and its History will be the starting point for Papperlapapp, Christoph Marthaler’s new musical and theatrical piece. It will also be the setting for the tragic fate of Richard II who, at the end of this same 14th century, surrendered to his human fragility when confronted to the demands of exercising power. This Shakespeare tragedy was the first ever presented at the Festival d’Avignon in 1947; this year it will be given in a new translation, starring Denis Podalydès in the title role. Olivier Cadiot’s novel, A Nest What For, which will be adapted for the stage, also questions the figure of the king, experiencing this time a very contemporary exile.

We have travelled, from Basel to Vienna, through Mitteleuropa whose literature, upset by the madness of war at the turn of the 20th century, will also be present on our stages with The Man without qualities by Musil, Kafka’s The Trial, Brecht’s Baal and, as a more recent reminder, Ionesco’s Frenzy for Two or More.

With the presence of Angélica Liddell, Julie Andrée T., Jean Lambert-wild, Christophe Huysman, Faustin Linyekula, Massimo Furlan and Falk Richter, we will prominently feature contemporary authors writing for the stage today. Words, bodies, sometimes music, shape the languages these artists use, exploring forms of expression between theatre and performance. They recount our times through their pain, their anger or their tenderness.

Our behaviours, our stories, luminous or dark, will be examined in the shows of Philippe Quesne, Gisèle Vienne, Stanislas Nordey, Zimmermann & de Perrot and the GdRA, all of them questioning on stage the fragility of our human condition. As will, in a more abstract way, the choreographed performances of Alain Platel, Cindy Van Acker, Anouk van Dijk, Josef Nadj, Boris Charmatz, Pierre Rigal, and Anne Teresa De Keersmaeker, the latter drawing inspiration from the ars subtilior music, invented in Avignon at the court of the Popes.
Music will be present throughout the Festival, notably with concerts by Pascal Dusapin and Rodolphe Burger, who will moreover orchestrate a large-scale ball for the 14th of July by the Pont d’Avignon. Contemporary literature will also be heard on many stages as well as in a series of readings.

The Festival will be cadenced by ten rendez-vous of The 25th Hour, offbeat lecture-shows and surprising projects brought about by actors otherwise present at the Festival, and by the eight pieces created for the Sujets à Vif, all of them from commissions based on an artistic encounter.

To share or deepen your experience as an audience, we invite you to the École d’Art for daily encounters with the artists and to the Gymnase Saint-Joseph to hear philosophers debate at the The Theatre of Ideas.

These collective experiences give us tools to better comprehend our present times of social and economic crisis. This “being together” uniting artists and audiences, essential for the theatre to happen, helps us resist closing ourselves to the world and yielding to the temptation of letting the very notion of public value dissolve before our eyes.

Everything starts in a forest. Extremely natural, inhabited by a buzzard in feathers and bones, this wooded landscape is staged like the reflection of the interior experiences of the characters who cross it. Depending on the light, mist and sound atmosphere, the metamorphosis capacity of the place is astonishing, following the example of the feelings driving the spectators, which go from harmony to danger, from the experience of beauty to anxiety in front of nature. It is through the spectacle of the forest that each individual dialogues with his private impressions, sometimes the most secret, like an entry into oneself, both individual and collective. But the forest is alive, full of tales, images, fantasies, forest myths as familiar as they are disturbing. Three figures soon spring up, including two archetypal beauties of today, post-adolescent idols: the young athlete, the perfection of appearances, and the rock star, the suicidal aura of ruin. Between the two of them: the trainer, the value of authority, of the taming of the body, suddenly confronted by primitive impulses and chaos. Every thing here is contained in contradiction, in the disturbing virtue of opposites and works on this tension that the show makes the spectators feel emotionally, physically and aesthe?tically. Changing visions of nature, passing in a breath, in a ray of light or a trace of smoke, from well-being to fear. Situations varying from one extreme to the other, from serenity to the most brutal murder. As an expert in perturbation, Gisèle Vienne composes images of a world in constant motion, from the imperceptible evolution to the most destructive chaos. It is over the forest that we see this, in the wood that we hear everything. Rarely has tree foliage been so revelatory as in this nature-driven theatre.

After seven years of shared life, the members of the Vivarium Studio have slightly changed there eco-system. Some of them have left or taken a pause, others have arrived. The desire for renewal, encounters and formal experiments has relaunched the group toward a new show. “For each crea?tion,” Philippe Quesne explains, “the writing begins during rehearsals, with the show’s title, a pretext for experimentation – from the creation process to performance – that nourishes a form of ambiguity between the true and the false, the real and the artificial.” Big Bang evokes as much a gigantic explosion as a founding theory or a simple comic book onomatopoeia. The play could take place on a small island, on which a shipwrecked group would remake the world, would go back to the origins to replay history in an accelerated fashion. A place that would serve as a frame for a succession of tableaux, like short plays, perhaps musicals, that would be used for the almost anatomical study of a human microcosm put into an unexpected geography. Big Bang will thus unfold a type of evolutionary theory, marking ruptures, inventions, decompositions, disappearances, like the strangest mutations. Undoubtedly men and animals, silence and languages, nothing and everything will exist: the floatation of the living. From plankton to post-modern, the Gymnase Aubanel will welcome the large and small history of mankind.