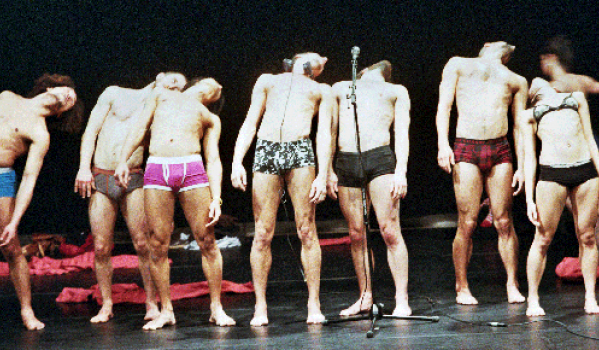 From the Artistic Director:
We are looking forward to presenting you with another three weeks of international art and theory. Choreographers, directors, scholars, artists and musicians from everywhere from Tokyo to New York to Johannesburg are coming to Hamburg with their view of our reality – and this year, for the first time they’ll be performing in the Deichtorhallen and on the Alster.

NEW SPACES
Thank you! Thanks to your huge interest in last year’s line-up, we are now reaching maximum capacity and must expand. This year, one of the International Summer Festival exhibitions will be in the Deichtorhallen: the legendary White Bouncy Castle by American choreographer William Forsythe. The second innovation is the Hamburg International Summer Academy, which opens its doors to the world for the first time, running alongside the festival– in collaboration with Hamburg University and the Körber Foundation. Founded by Nikolaus Müller-Schöll, Chair of Theatre Research, renowned practitioners and festival artists will teach thirty postgraduate students from across Europe.

OPENING
The summer festival helps Hamburg: So that we don’t become notorious as a venue that puts on Disney-style musicals, we have asked New York’s most internationally sought-after theatre artists to work with the Burgtheater to develop a musical.

Nature Theatre of Oklahoma are opening the summer festival with LIFE AND TIMES – EPISODE ONE. It’s not a blockbuster that comes with its own promotional Happy Meal, rather it’s the next big thing from New York. We promise. Israeli-British choreographer Hofesh Shechter, the discovery of 2008’s festival, has meanwhile become a worldwide star.

His new piece POLITICAL MOTHER had its premiere as this programme went to press and for the festival opening the company will take to Hamburg’s biggest stage with 15 dancers and musicians. Jérôme Bel’s new piece CÉDRIC ANDRIOUX presents a profile of one of the central dancers of Merce Cunnigham in a German premiere during the opening weekend.

THEATRE FROM AROUND THE WORLD
Philippe Quesne’s melancholic piece in the snow was one of the highlights of last year’s festival. We have co-produced his new piece BIG BANG, which is coming to Hamburg direct from the Avignon festival. Japanese artist Toshiki Okada is still not forty years old, but has already developed into one of today’s leading directors. In Hamburg he presents a wonderful evening on the contemporary Japanese working day. Big Art Group from New York exploit their multimedia film theatre to constantly confront the big issues of our time. THE SLEEP uses old cinema technology and new live music to tell of a threatened world at the start of the 20th century.

FOCUS: WATER
Last year we so enjoyed creating artistic projects on the theme of the financial markets, that the focus of this year’s festival is WATER. For years, water has been one of the resources at the centre of an increasingly intense political struggle. Following the increase in floods, droughts and other extreme weather events it is simultaneously becoming more and more threatened. We have invited artists and practitioners from Benin to New York to come to Hamburg with projects on water: A contemplative, exclusive island on the Alster awaits them, along with a bicycle intervention , a lab on the Kampnagel grounds, a one-woman show from South Africa and top-class speakers, who explain to us (among other things) why one cup of coffee requires a hundred litres of water.

STARS
Two big names on the international theatre scene are closing the festival. Exceptional Belgian choreographer Alain Platel takes a bow with his wonderful poetic evening OUT OF CONTEXT – FOR PINA in front of Wuppertal’s star choreographer.

And as always the last night of the festival is a reason to spend the whole night at Kampnagel: Forced Entertainment from England kick start proceedings with a 6-hour evening of story telling
AND ON THE THOUSANDTH NIGHT, before you sing at ORCHESTRA KARAOKE and can dance to BLOCKPARTY into the small hours.

MUSIC
This year we are expanding our theatre line-up with a series of special concerts. Whale Watching Tour, an insider tip along the lines of Antony and the Johnsons, open the event. After a year away from the stage, Norwegian metal legends Ulver perform one of their rare concerts, Blixa Bargeld and Alva Noto make their German debut and 1000 Robota exclusively present their new record, performing with classical musicians.

It is an impressive 34 metres long, 13 metres wide, 11 metres tall and 2 tonnes in weight and has even earned a place in the Guiness Book of Records as the largest art installation for an indoor space: the WHITE BOUNCY CASTLE. The festival invites both young and old onto this ‘anti-stage’ to jump for joy and feel light as a feather. With the inflatable castle, William Forsythe and Dana Caspersen have conceived a choreographic space, in which there are only participants and no audience, for every visitor is a dancer, choreographer and spectator, all at the same time. The music of Joel Ryan plays an important role, as they react to what is happening in the bouncy castle. William Forsythe has revolutionised contemporary dance and through his works has detached the practice of ballet from its associations with the classical repertoire and has turned it into a dynamic art form.

„As soon as someone steps inside the castle, the dance has already begun.“ [William Forsythe]

Caden Manson is bringing the destruction of nature at the hands of humanity to the stage, as a fascinating-destructive evening of theatre. Based on the apocalyptic classic, ‘The Purple Cloud,’ an explorer undertakes an expedition to the as yet undiscovered North Pole. But during his absence the world is threatened by a poisonous cloud. In an apocalyptic round dance of images, the piece draws a picture of a resigned and apathetic society, using the staging methods from early cinema technology, Victorian object theatre and Real-Time technology. BIG ART GROUP constantly focuses on the production of images and makes the spectator look critically at their own perceptions.

“With their dense, text-heavy shows, Manson and Nelson are enamored of spectacle, and they fully exploit the excitement and sadness one should feel watching something as evanescent as theater”. [New Yorker]

Flemish choreographer Alain Platel stages emotional emergencies, simply through movement. Nine dancers, inspired by the motif of ecstasy, immerse themselves in a fragile world and create touching images that speak of the excessive demands of life, that show the social pro and contra and present human existence in all its physical and psychological forms. The virtuoso ensemble creates a perceptive portrait of our time, oscillating between communal exuberance and personal loneliness. Alain Platel has shaped European dance for twenty years and is among the most influential choreographers of his generation.