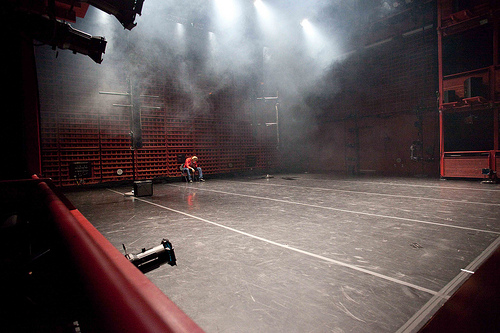 AMERICAN REALNESS is a festival of new dance and contemporary performance made for the annual Association of Performing Arts Presenters (APAP) Conference; a platform for the other-ed, experimental and subversive American artist tearing at the boundaries of their form in pursuit of new research and artistic production. AMERICAN REALNESS is unleashed onto the performing arts marketplace with an agenda to reshape the identity of contemporary American dance and performance, and an eye towards global diffusion.

KEITH HENNESSY
Crotch (all the Joseph Beuys references in the world could not heal the pain, confusion, regret,
cruelty, betrayal or trauma …)

Crotch references the images and actions of artist Joseph Beuys. On the surface the work is about art, about its histories and heroes. Deeper, a sadness grows, a queer melancholy. A song, a dance, a lecture, an image. Talking to the dead. Chaos through Play becomes Form.

SERVING is a two-course meal; an evening of performance sampling short works and works-in-progress from some of New York’s most exciting choreographers. Entrée features John Jasperse and James McGinn’s Janitors of Lunacy, a mystical ritual dance/opera of poverty, along with a sneak-peak excerpt from Kyle Abraham’s Live! The Realest MC (Thurs, Jan 6 & Sunday, Jan 9) or Faye Driscoll’s forthcoming work snake, dog, dragon (Fri, Jan 7 and Sat Jan 8). Le Plat presents Miguel Gutierrez’s HEAVENS WHAT HAVE I DONE a contemporary aria for an unstable world.

JOHN JASPERSE/JAMES McGINN
Janitors of Lunacy
Two men and two trash cans, shrouded in darkness, mystery and ridiculousness. Janitors of Lunacy is a duet set to the music of the proto-punk chanteuse, Nico. Initially a model turned Warhol Factory Superstar, Nico was also partially deaf, thus accounting for her reputation of occasionally singing off key. The piece is part mystical ritual; part dance/opera of poverty; part homage to a golden age when art, politics, rock, and fashion first collided and when artistic subversion still held the promise of real social change; and part celebration of the power within lunacy and playfulness. Sensorial explorations of seemingly anti-sensual objects make a spectacle of the anti-spectacular, where ridiculous actions are seen as a practice leading towards mystical transformation.

KYLE ABRAHAM
Live! The Realist MC work-in-progress
Inspired by the duality of Pinocchio’s plight to be a “real boy”, Live! The Realest MC investigates gender roles in the black community and societal perspectives of the black man through hip-hop and celebrity culture. Accompanying this overlying theme of realness is the juxtaposition of live performance versus all things prerecorded, articulated through Abraham’s original hip-hop lyrics and his love for the mysteries a karaoke system can evoke.

FAYE DRISCOLL
snake dog dragon work-in-progress
snake dog dragon (working title) examines the poignant tension between beauty, power and desire. Driscoll, collaborator Jesse Zaritt and composer Brandon Wolcott will probe ‘beauty’; as it is manifested in the ineffable promise of romantic love; as a perpetual dangling carrot of attainment; as Dance, the art form; as myth, ritual, masculine/feminine blur of power; as the performance of dissolving selves. Driscoll asks, What is the power of real transformation? A snake shedding it’s skin versus the contemporary botox phenomenon. How do these actions express the same impulse?

MIGUEL GUTIERREZ
HEAVENS WHAT HAVE I DONE
Set to music sung by renowned soprano Cecilia Bartoli, HEAVENS WHAT HAVE I DONE unfolds from a rambling monologue addressing the artists’ ascension to success, the hypocrisies of an unstable world, artistic critiques, and dreams and desires of a more personal nature.

SATURDAY, JANUARY 8, 12PM
SUNDAY, JANUARY 9, 2:30PM
“What would have happened in 1963 if someone from the Voguing dance tradition in Harlem had come down to Judson Church to perform alongside the early postmoderns?” is the proposition for Trajal Harrell’s series of dances that comes in five sizes- Extra Small (XS), Small (S), Medium (M), Larger (L), and Extra Large (XL). The (XS) is a twenty-five minute solo danced by the choreographer and made for a maximum audience of twenty-five seated on the floor of the theater stage, gallery floor, or in the corner of the room.

SATURDAY, JANUARY 8, 10:30PM
MONDAY, JANUARY 10, 8PM
Ann Liv Young’s style of audience interaction has been compared to the US government torturing prisoners at Guantánamo bay. A well-known museum director has likened her to an artist who sets off bombs in public places. A Viennese police report describes her as conducting “forced” interviews. (For good measure, we’ll add that she gets a lot of emails telling her she’s crazy and going to hell.) These critiques suggest that when you see Young perform, she locks you in a room and throws away the key.

In her new show, Mermaid Solo, Young is a mermaid retelling her life story. Whereas mermaids are sanitized and disneyfied in modern culture, in folktales they seduce, capture and kill sailors. Their allure is inescapable. They are sexualized, but also grotesque fish creatures who are, in fact, sexless. We are disgusted, intrigued and turned on. A mermaid protecting her oceans or a woman speaking her mind becomes something dangerous. These stories don’t come out of nowhere, magic or an ability to squash free will. We make them up because we desire them.