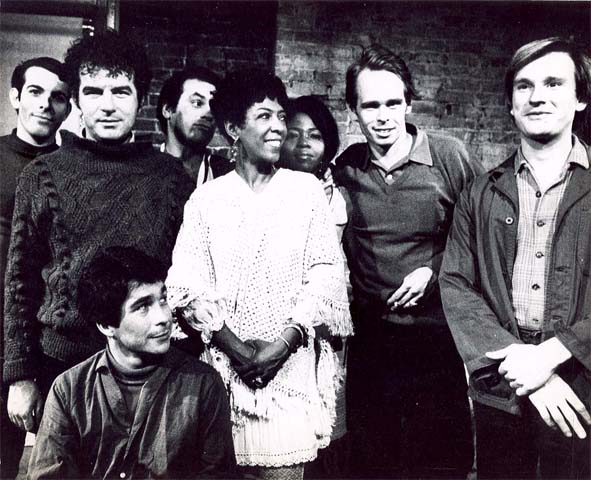 Ellen Stewart, founder of La MaMa, ETC passes away at 91.

Ellen Stewart was the Founder and Director of the La MaMa E.T.C., the theatre that began in October 1961, and to this day continues to be of great importance to world culture. To date, La MaMa E.T.C. has presented more than 1,900 productions. Its resident theatre troupes have performed throughout the world including Columbia, Venezuela, Lebanon, Iran, Belgium, Holland, Austria, Denmark, Finland, Scotland, England, Sweden, France, Italy, Switzerland, Spain, Croatia, Korea, Turkey, Yugoslavia, Australia, Greece, Ukraine, Siberia, The Netherlands, and Macedonia.

New Eastern European Theatre was introduced in America in 1967 when Ellen Stewart brought Jerzy Grotowski, Ryszard Cieslak, and Ludwig Flaszen to America. In this endeavor she was aided by Ted Hoffman of New York University. Ms. Stewart was instrumental in introducing to America some of the world’s most influential artists including Andrei Serban and Tom O’Horgan, and is proud of La MaMa’s long heritage as an international theatre, having hosted artists from more than seventy different countries.

Ellen Stewart has staged, composed, directed and written librettos for original folk-opera/ spectacles, presented in America, Uruguay, Argentina, Austria, Italy, Turkey, the Philippines, the Cameroon, Zaire, Central African Republic, Senegal, Nigeria, Brazil, Haiti, Morocco, Israel, Bulgaria, and Yugoslavia. She has lectured in all of the above countries, is a visiting professor of the Institute of Drama in South Korea and is a long-standing member of the Seoul International Theatre Institute.

Ellen Stewart received many Honorary Doctorates and awards, among which are the prestigious MacArthur “Genius” Award and the National Endowment for Arts and Culture. She was appointed an “Officer” in the “Odre Des Arts Et Letters” of the Republic of France and received the Les Kurbas Award for “Distinguished Services to Art and Culture” from the Ukraine. In January 1993 Ellen Stewart was inducted into the “Broadway Theatre Hall of Fame , becoming the first Off-Off-Broadway Producer to ever receive this honor. In December 1994 Ellen Stewart was awarded the “Order of the Sacred Treasure, Gold Rays with Rosette” by the Emperor of Japan. She also received the Human Rights Award of the Philippines from President Corazon Aquino. (from the Lamama Website)