In Performance: Eleanor Bauer’s A Dance For The Newest Age (Brussels) 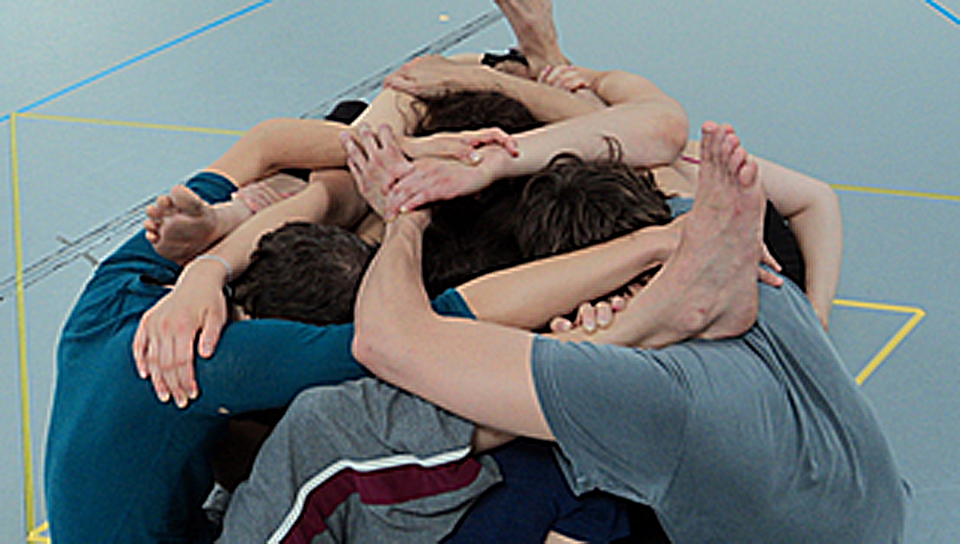 The audience sits on three sides of an equilateral triangle. In the middle, six dancers perform through a system of shifting tripartite symmetries. Inhabiting three-fold paradigms such as solid-liquid-gas, past-present-future, nature-society-spirituality, head-heart-hand, idea-material-form, or sensation-imagination-expression, the emergent relationships negotiate balance, tuning, order and entropy.

Working on the ‘invisible’ principles governing matter and movement, choreographer Eleanor Bauer questions what we think we know about the body and space through concepts of energy both new and ancient. Hand-in-hand with original music by Chris Peck, lighting design by Bardia Mohammad, costumes by Ada Rajszys and a brilliant cast of performers, A Dance for The Newest Age (the triangle piece) brings dance to the fore and lets the triangle speak for itself in a crash course collision between antiquity and science fiction, fact and fantasy, hard matter and soft subjects.

More Info:
The collapse of modernity made us aware of the shortcomings of any one all-encompassing world view and left us with three separate realms of understanding: science to demystify the material world, politics to organize the social world, and philosophy or religion to provide us with enlightening concepts. As if in response to the pastiches and hybrids of postmodernism that only affirmed our fragmented selves, the phenomenon of New Age emerged full of nostalgia for a pre-modern unity only myths are made of, reviving ancient wholistic practices and inventing new ones by taking leaps of faith between scientific, social, and spiritual meanings.

Moving towards a yet newer age, what other, better alternatives can we conjure to think about humankind’s ability to construct a world-view together, beyond relativism, past the irreverence of postmodernism, and without the one-world platitudes of New Age?

Using the human body and its many registers of intelligence as its medium, choreography invigorates the intersection of material, social, and conceptual spheres. A Dance for the Newest Age (the triangle piece) builds on that: shaping the body through constitutive states of matter, performing thought-actions and constructing concept-structures, composing group dynamics with the use of shared imagery. Through immersion in several modes of sensing and making sense, A Dance for the Newest Age (the triangle piece) proposes dance as an “everythingness practice.” Illuminating a spectrum of expressions through the prismatic body, careening around the Trammel of Archimedes, crumbling, inflating, melting and crystallizing, navigating the pleats of the seven-pointed star, everything is not practiced because “anything goes.” This is insatiable hunger, eager inclusion, a cry that rings through the starry night, “everything comes: bring it on!”