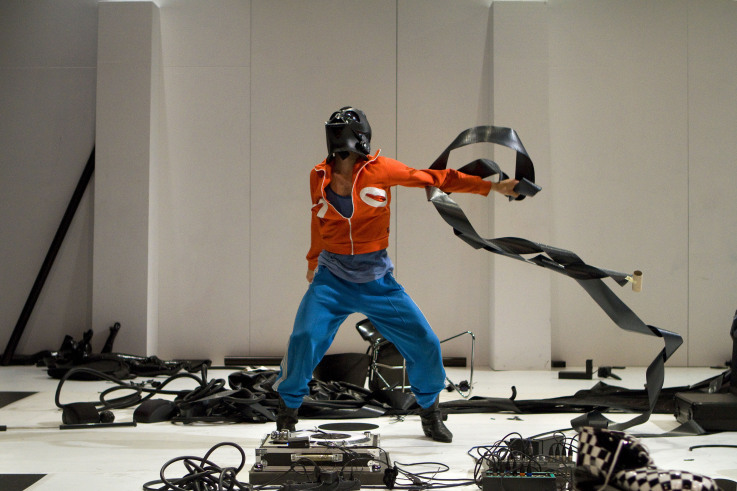 1. Can you tell us a little about your work, your history and your performative concerns.
My works also stand for the art of the encounter and the exploration of new artistic potential beyond the predictable and imaginable. These operate through devised performance that is mostly interpersonal, relational and process driven. The objectives regarding content and final form are often developed through dialogue and collective reflection throughout the creative process. These are created through associative thinking, in which intuitive insight is accompanied together with analyses. Through these works, I aspire to achieve a whole composed of difference and paradox.

For a while I aspired to make a theatre without representation by restoring language to the unity of thought, in which thought and sign would be entrained as one in the performers body. But this project demonstrated itself to be impossible to concretize. Since a gesture is never synchronous with thought, but in deferral. From the point of view of the experience of the performer, I believe that sensation produced by movement does not represent anything; sensation it is a becoming produced by an encounter of the body with forces. In sensation there is no separation between form and content, ontologically speaking sensation is beyond representation. From the point of view of spectating, yes, representation it is always at work, since it corresponds to the interpretation of the sign, the viewer projects content when he/she witnesses the forms presented by the body.
With my practice, after failing to explore the “modernist” aspiration to break the codes of representation and restore body language to the unity of thought. I start to stage the critique of the “theological” structure of theatrical representation, in which the performers exhibit inscriptions of the desires of a “master” that “transcends” the object of his own creation. This has been articulated in the choreography Against Architecture (2007), in which two performers reveal the friction between their idea of “self” and the roles they undertake as interpreters. These mentioned meta-theatre concerns have been informed by the theatre theories of Antonin Artaud (1896-1948) and the programmatic writings by Gilles Deleuze (1925-1995) & Félix Guattari (1930-1992), primarily in their critiques of representation and their alternative ontology. Under the influence of these thinkers, I have aspired to make choreographies that question the essentialist notion of “self” founded on classical concepts of identity, logic and truth; stage dramaturgical devices that could emphasize the split between signifier and sign; and explore the notion of immanence trough a relational practice. For this last, I grounded in the Deleuzian outside-in conception of the human body as an inscriptive surface that is open to an exterior and inscribed by multiple perceptions that produce intensities that suggests the illusion of depth. Also, inspired in theories of the figural (from his book on Francis Bacon; Bacon Logic of Sensation), I have been attempting to resist representation by liberating the abstract within the figure. By utilizing the concept of “stillness” “stutter” and “stammer”, I have been occupied in generating a choreographic signature that could resist the modernist “essentialist” perspective that reduces dance solely to the art of the kinaesthetic and kinetic (representing what the dance theoretician André Lepecki after the philosopher Peter Sloterdijk names the “being towards movement”). Being the last how modern dance has been legitimated within the other canonical art disciplines.

By utilizing methods that resemble Berthold Brecht’s (1898–1956) alienation effect and conceptual art’s self-referentiality, I have attempted to rupture theatres 4th wall’s divide between the spectator and the performer, that project the audience into an imaginary space, one distant from the reality of the “presence” of the living body of the performer. Last but not least, based in two types of non-sense: from depth (Antonin Artaud) and surface (Lewis Carrol) I have been questioning the accepted convention that the artist should generate consequent rational discourse that privileges content above form.

All in all, the topics addressed with my work have been affect, the critic of representation, the loss within transfer and translation, the relationship of power between the performer and the spectator, the poetics of failure, self-reconfiguration and objecthood.

2. What are you working on now?
Presently, I find the urge to “affirm” my work anew, under the influence of a reflection that is both strange and challenging to me. I trust that, when informed by the sensibility of visual arts performance and its discourse, I will be able to present a body liberated from habits and general conventions of contemporary dance/theatre making. Patterns, which I have attempted to resist and dismantle by recurring to strategies of “deconstruction”.
Therefore, my current research consists in investigating in a subjective manner the relationship between fine arts and contemporary choreography. I aspire through this manner to find out how the objecthood and visuality can permeate performance and choreography. I also wish to comprehend how the choreographic and theatrical notions can permeate the plasticity of the performance/installation works that I present within the context of fine arts.

Although, I agree with the argument that when venturing into other disciplines through an interdisciplinary practice helps one to better understand the position of ones own discipline, I do believe that an encounter between choreography, theatre and fine arts performance will not only help me to individuate my practice through the acknowledgement of the differences between disciplines, but will enable one me to transcend the discipline specificity altogether.

Within the coming years the main focus of my activity will be centered upon two main activities: creation of new work for conventional theatre spaces, and site-specific projects and conceived for art spaces.

With the works for theatre, I intend to keep on creating large-scale projects. These projects will have the same dimension than my early performances like, Erva Daninha (2007), Thoughts unsaid then forgotten (2008) and Spectatorship (2009). These are meta-theatre performances that explore the relationship between the performer and the spectator. They combine notions of choreography, theatre, and visual arts (live art, conceptual art, and installation art). They employ several performers, artistic collaborators and the technical means necessary in order to generate more monumental and complex formal results.

During the coming years, I also wish to pursue site-specific investigation in art and exhibitions spaces. With such, I wish to explore the plasticity of the living human body in relation to the plasticity of inanimate objects, the various degrees of spectators proximity and the influence of the last upon the performers. I also hope to explore performers (and spectators perceptual) exhaustion through long duration performances that “celebrate” a slow ontology and question traditional formats of timing through the obliteration of tension bow. These both type of works will often be informed by notions of post-structuralism theory, dance/theater history and traditional, and neo-avant-garde visual art performance.

This general heterogeneous modus operandi will be significant for me, since this will inform my work with practical and theoretical knowledge from diverse medias that permit me to question the conventional notions regarding the “artificial” limits between the disciplines, and in so doing, permit a more direct and realistic reflection, porosity and interaction with the present globalized society.

3. What are your biggest performative obstacles for yourself in this new work?
At the moment my obstacles are not really with performative realm, but within the organizational sphere. I have been for 10 years working under a production house in the Netherlands. This relation was brought to an end. Now, I am setting up my independent structure, therefore, currently I am trying succeed in creating an administrative team to launch my work further. Now, I am looking urgently for a financial administrator, co-producers and a international agent with a strong international network.

4. What was the last piece that you saw that you would recommend to the Network and why?
I see a lot, so this list would be very wide. Within, The Netherlands I have been very interested in choreographers that have been busy either with the critic of representation, translation, new modes of presence and/or meta-performance: Ivana Muller, Paz Rojo and United Sorry are makers that I recommend. I am also impressed in a synergy that is coming from USA dance scene, that now is becoming more and more visible in Europe. Absolutely distinct makers elaborate in performative excess and address the spectator directly in new manners: Nature Theatre of Oklahama, Ann Liv Young, Miguel Gutierrez & The Powerful People in so doing bring performance to an a very unconventional edge (from the hilarious to discomfort). From USA I keep being impressed by Deborah Hay that keeps surprising. Specifically her work for other dancers: a solo for a English female dancer and one for 6 female dancers titled I sing to you (both presented at Springdance Festival). I am very interested in the subtle singular vision of DD Dorvillier: affirmative, defying (common) sense, representation and the conventional modes of thinking performance. I look forward for her new work at Something Raw Dance and Performance Festival in Amsterdam.