In Performance: Rude Mech’s The Method Gun at DTW (NYC) 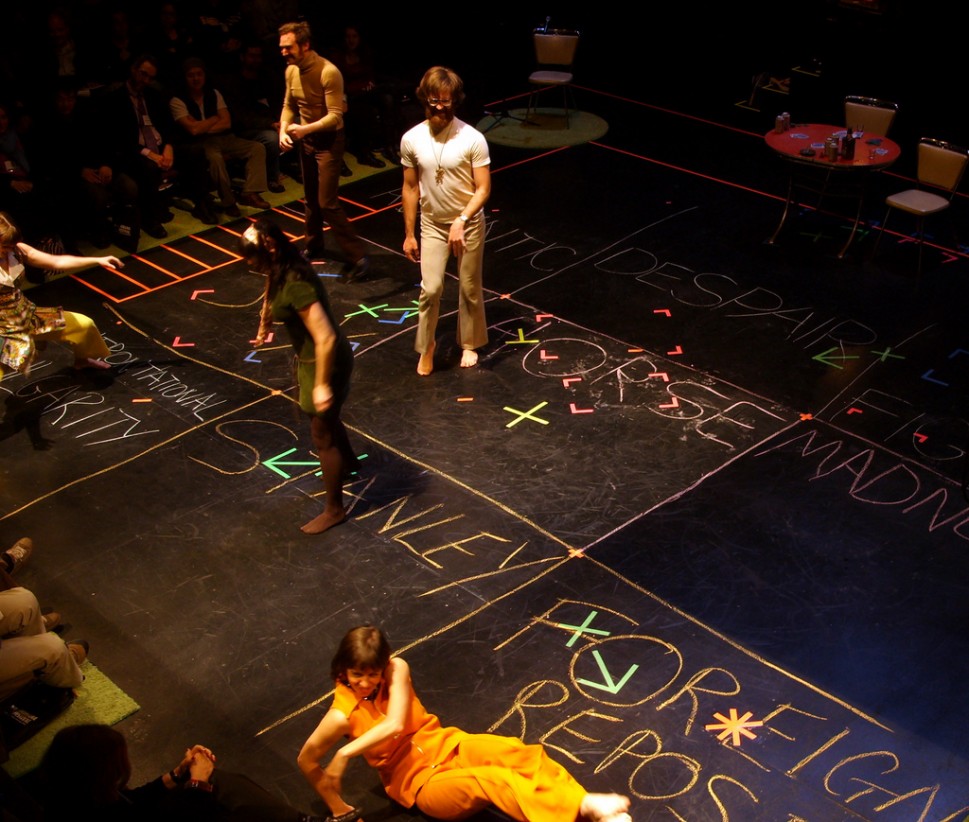 Using found text from the journals and performance reports of Stella Burden’s company, “The Method Gun” re-enacts the final months of her company’s rehearsals for their nine-years-in-the-making production of “A Streetcar Named Desire.” Stella left the company under mysterious circumstances in 1972. Diaries and letters from actors in the company express a sense of desperation, inadequacy, and frustration inherent to the process of creating meaningful work for the stage and in everyday life. Set amid swinging pendulums and talking tigers, “The Method Gun” bounces between interior monologues, rehearsal sequences of “Streetcar,” and group interactions – all gleaned from historical documents – to express a longing for the return of inspiration and a more believable presentation of self in everyday life.

Since 1995, Rude Mechs has created a mercurial slate of original theatrical productions that represents a genre-defying cocktail of big ideas, cheap laughs, and dizzying spectacle. What these works hold in common is the use of play to make performance, the use of theaters as meeting places for audiences and artists, and the use of humor as tool for intellectual investigation. They tour these performances nationally and abroad; maintain The Off Center, a performance venue in Austin for arts groups of every discipline; present nationally recognized artists; and run Grrl Action, a year-round arts mentoring program for teenage girls.

In 1999, Rude Mechs assumed the management of The Off Center, a performance warehouse in East Austin. The Off Center houses a flexible 100-seat theatre, the administrative offices of Rude Mechs, and studios for visual artists. In 2010, they renovated and opened The Off Shoot, a classroom dedicated to the work of Grrl Action, their year-round arts mentoring program for teenaged girls. The quality and innovation of the company’s theatrical productions have firmly established Rude Mechs as one of Austin’s most highly valued cultural assets.

Rude Mechs is an ensemble-based theatre company that operates with a full company of 28 members. They create original plays that they produce in Austin, TX, and tour nationally and internationally. Their touring productions include “The Method Gun”, “Get Your War On”, “How Late It Was, How Late”, “Cherrywood”, and “Lipstick Traces.” Our Off-Broadway productions include “Get Your War On” and “Lipstick Traces.” Our production “The Method Gun” was selected for the 34th Annual Humana Festival of New American Plays. (from the company’s website)