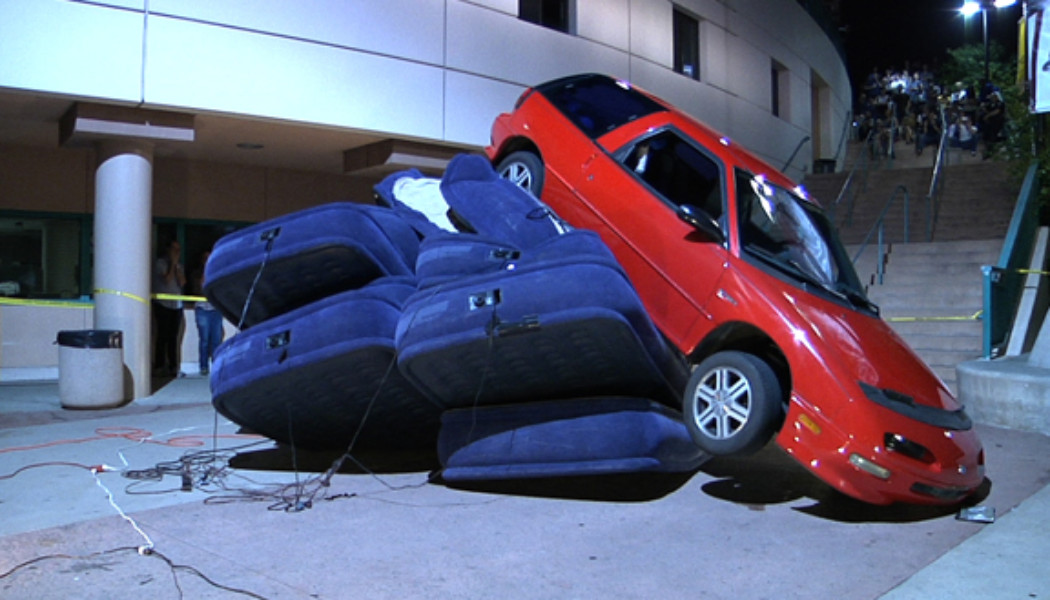 PICA’s annual Time-Based Art Festival (TBA) draws artists from across the country and around the globe for a convergence of contemporary performance and visual art in Portland, Oregon. Now in its ninth year, the TBA Festival is presented September 8-18, 2011, with visual art exhibits running through October. TBA activates the entire community with art and ideas. For early artist details, visit picaresourceroom.org and stay posted for more information.

Jesse Sugarmann
Lido (The Pride is Back)

Jesse Sugarmann’s automotive performances are elegant pile-ups. His vehicular actions engage the car accident as an inadvertent monument, a spectacle of trauma and a point of social exchange. Lido (the pride is back) is Sugarmann’s accident/monument in salutation of Lido “Lee” Iacocca, the now-retired sales (and sometimes spiritual) leader of the Chrysler Corporation. Positioning three Chrysler minivans atop 42 inflatable airbeds, Sugarmann creates a slow motion car wreck that soars clumsily through the air, the vehicles softly piling upon themselves with a cozy violence.

Sugarmann is an interdisciplinary artist with footings in video, animation, sculpture, and fibers. His work is shown both nationally and internationally, having recently exhibited at venues such as the Getty Institute, Los Angeles; Museo Tamayo, Mexico City; the Banff Center, Alberta; and Filmbase, Dublin. Sugarmann currently lives in Bakersfield, California, where he is the Professor of New Genres at Cal State Bakersfield. He is a co-founder of Ditch Projects in Springfield, Oregon (www.ditchprojects.com), and is represented by Fourteen30 Contemporary in Portland, Oregon.

Comic, contemplative, and surreal, Whispering Pines 10 is a one-act, live-performance, video opera sung by soprano Daisy Press and featuring Moulton’s alter ego, Cynthia: a hypochondriac agoraphobe prone to colorful hallucinations and absurd fantasies. Backed by Hallett’s original libretto and score, Cynthia seeks health and total happiness within her virtual environment, but settles for fad cures and new-age kitsch. The work is a conversation-generating update of the “mad scene,” realized within a medicated, feminized, and quintessentially American vernacular.

Born in California, Moulton is a Brooklyn-based video, installation, and performance artist. She attended school at UC Berkeley and Carnegie Mellon University, and has participated in residencies at Skowhegan, De Ateliers, LMCC, and Harvestworks. She was also a New Commissions artist at Art in General in 2009. Moulton has presented at venues such as The Wexner Center, MoMA P.S.1, The Kitchen, Performa 09, Electronic Arts Intermix, the Andy Warhol Museum, and Socrates Sculpture Park.

Nick Hallett is a New York-based composer, vocalist, and cultural producer. He held the first RE:NEW RE:PLAY artist residency at the New Museum in 2009, and his work was included in Performa in 2007 and 2009. Hallett is the Music Director of the Joshua Light Show—a team of projection artists with roots in the psychedelic rock movement of the 1960s—which recently performed at the American Museum of Natural History’s Hayden Planetarium to his original music.

What can authorities expect from a work of art? What are the marks left by political history on the body? Can a government transform a body so far that it literally incorporates the colors of national emblems and governmental identification? In World Fair, the body is experienced as a memory bank able to record, erase, or register different ingredients of modern reality, while the stage is a “database” of different national representations and their evolutions through time.

Rachid Ouramdane is a French choreographer of Algerian descent at the forefront of Europe’s conceptual dance thinkers. His projects reassess the definitions of “performer” and “choreographer” and question modes of producing and circulating artwork. Prior to founding L’A. in 2007, Ouramdane collaborated with artists such as Emmanuelle Huynh, Meg Stuart, Christian Rizzo, Alain Buffard, and choreographer Julie Nioche, with whom he co-founded Fin Novembre in 1996. Ouramdane has worked with institutions also focused on visual art, including FRAC Champagne/Ardennes, Manège de Reims, and the Ménagerie de Verre in Paris. Besides choreography, Ouramdane regularly leads artistic workshops and moderates international encounters with artists.

Offsite Dance Project returns to Portland and embeds three dynamic choreographers in the Central Eastside Industrial District. Under bridges and at loading docks, the performers will explore the “edges” of Portland, both in geographic and psychological terms. The audience will be guided on a walk between three different sites.

The artists selected for the event express some of the varied, current choreographic impulses in Japan. Yukio Suzuki is a leading light of the generation of dancers who use their Butoh training to inform their performance. Ho Ho-Do is the duo of Mika Arashiki and Mari Fukutome. Together they create theatrical and site-specific work that reflects the delicate sensitivities and impulses they feel in everyday life. Yoko Higashino is the artistic director and choreographer for Baby-Q, where she has developed her unique style that ranges from the coldly robotic to the erotic and fragile. For this work, Higashino will work with Yohei Saito, the visual image designer of Baby-Q; Wayne Horvitz, the renowned composer, pianist, and and electronic musician; and dramaturge Corrie Befort.

Offsite Dance Project was started in 2008 to pioneer alternative approaches to arts presentation through site-specific performance in locations such as trains, parks, and museums. Offsite also produces an annual community forum, We dance, to stimulate Japan’s contemporary dance scene by bringing artists from various genres together in unusual circumstances that generate new ways of approaching their art.

A co-production of An Creative.Inc. (Tokyo). Supported by the Japan Foundation through the Performing Arts JAPAN Program. Production funding support from the Saison Foundation and the Tokyo Metropolitan Government.