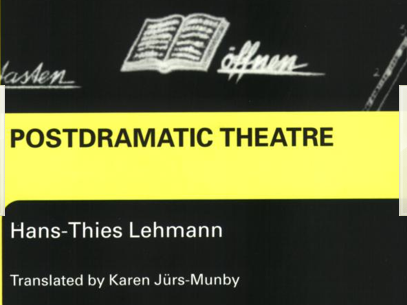 Hans-Thies Lehmann’s groundbreaking study of the new theatre forms that have developed since the late 1960s has become a key reference point in international discussions of contemporary theatre. Postdramatic Theatre refers to theatre after drama. Despite their diversity, the new forms and aesthetics that have evolved have one essential quality in common: they no longer focus on the dramatic text.

Lehmann offers a historical survey combined with a unique theoretical approach, illustrated by a wealth of practical examples, to guide the reader through this new theatre landscape. He considers these developments in relation to dramatic theory and theatre history, and as an inventive response to the emergence of new technologies and a historical shift from a text-based culture to a new media age of image and sound. Engaging with theoreticians of “drama” from Aristotle and Brecht to Derrida and Schechner, the book analyses the work of recent experimental theatre practitioners such as Robert Wilson, Tadeusz Kantor, Heiner Muller, the Wooster Group, Forced Entertainment, Theatre de Complicite and Societas Raffaello Sanzio. This excellent translation is newly adapted for the Anglophone reader, including an Afterword by Karen Jurs-Munby providing useful theoretical and artistic contexts for the book.

Writings About The Book:

… Even thought the notion of postdramatic theatre is not radically new (Richard Schechner first used the term “post-dramatic theater” in the 1970s to describe happenings[1]), it has only recently been developed into a comprehensive theory by Hans-Thies Lehmann, one of Germany’s foremost theatre scholars and critics.[2] The 1999-publication of Postdramatisches Theater[3], Lehmann’s book-length study on the subject, immediately established the concept of postdramatic theatre as the widely accepted terminological ‘upgrade’ of current theatre-aesthetic discourse.

In January 2000, Lehmann’s book was featured on the cover of the German theatre magazine Theater heute, not usually considered a spearhead of advanced theatre theory these days.[4] The success and popularity of Postdramatisches Theater cannot only be explained by its very accessible presentation of highly complex theoretical issues (from Hegel’s aesthetics to Kristeva’s semiotics) and its insightful analyses of a wide range of theatre productions and performances (from Robert Wilson to German director Einar Schleef), but also by the plausibility of the concept of postdramatic theatre itself. Even though the concept of postdramatic theatre is in many ways analogous to the notion of postmodern theatre, it is not based on the application of a general cultural concept to the specific domain of theatre, but derives and unfolds from within a long-established discourse on theatre aesthetics itself, as a deconstruction of one of its major premises.

Lehmann’s book is mainly a response to Peter Szondi’s Theory of the Modern Drama from 1956 which interpreted the history of modern drama from Ibsen through Arthur Miller as so many responses to the ‘crisis of drama’, by which Szondi meant the widening gap between a historically conditioned Aristotelian form of drama and a modern content for which that form was no longer suitable. Szondi defined the drama of modernity as a historical formation that “arose in Elizabethan England […] came into being in seventeenth-century France and was perpetuated in the German classical period.”[5] As a “specific literary-historical event”[6] the concept ‘drama’ reflected the aesthetic discourse of those periods: in its insistence on the absoluteness of drama as a self-positing and self-propelling entity; the adherence to the unities of place, time, and action; the dominance of dialogue and interpersonal communication; and the notion of dramatic time as always being in the present. Szondi argues, however, that this self-enclosed universe of drama from which any trace of authorship as well as any reference to concerns external to the plot must be absent, began to crack under the conditions of modernity. It was the intrusion of a historically inevitable Epic dimension into modern dramaturgy that playwrights like Ibsen, Chekhov, Strindberg, etc. had to contend with while still trying to do justice to the formal demands of well-crafted drama.

The history of modern theatre for Szondi is a history of mostly failed compromises between the requirements of absolute drama on the one hand and modern themes and subject matter demanding an epic treatment on the other hand. Lehmann’s book in many ways seems a continuation of Szondi’s project, but a continuation that is at the same time based on a major revision and reassessment of Szondi’s predominantly Hegelian model. Postdramatisches Theater, if compared to Szondi’s essay, is also indicative of the major paradigm shift that has occurred in theatre studies since the 1960s, mostly as a result of changed theatre practices, but also of the increasing impact of performance studies on theatre scholarship. Lehmann regards performativity, not rootedness in a dramatic text, as the major constituent of theatre. The notion of ‘postdramatic’, however, does not imply that theatre no longer uses texts or that writing plays would no longer be possible (or relevant), it only implies that the other components of the mise en scène are no longer subservient to the text. There are many contemporary plays (from Heiner Müller to Suzan Lori-Parks) that could be considered postdramatic since their dramaturgy is already a response to the fundamental changes in theatre practice and theory that have occurred since the 1960s. Different from Szondi who only discusses modern theatre in negative terms—as an art form in crisis, a becoming-problematic of drama—Lehmann maps out an affirmative aesthetics of postdramatic theatre and provides a catalogue of ideas that allow describing and analyzing that kind of theatre in positive terms.

While British is neatly boxed in either drama or devised performance, a similar distinction cannot be made about contemporary theatre practices on the European Continent; here, traditional ’text-based theatre’ goes hand-in-hand with experiments in theatrical forms, in staging, directing, and performing these texts. Productions of directors such as Frank Castorf, Guy Cassiers, Michael Thalheimer, Luk Perceval, and also William Forsythe, are no longer interested in theatrical representations of a text as no more than an end in itself in order to enable spectators to spectate actors who act. Their strategies go beyond realism and a conventional theatrical symbolism or metaphorical presentation; the actors no longer portray characters to identify with; music, live video, and references to contemporary pop and media culture are integretated. Consequently effect, these ‘dramaturgies beyond representation’ not only renegotiate assumed hierarchies between texts, bodies, and spaces in live performance, but also challenge customary genre distinctions between drama, dance, and performance art.

It may well be a result of the distinct funding structure of theatre on the European Continent that has facilitated the transfer from the new impulses in theatre and performance that emerged in the 1980s, and which Hans-Thies Lehmann has described as ‘Postdramatic Theatre’, into the institutionalised traditional theatre houses. Not driven by the box office and the urge to please theatre consumer (yet still – and probably: therefore – enormously successful and rarely not performing to full, sold-old houses), the directors mentioned above and their ensembles at ro:theatre Rotterdam, the Volksbühne Berlin, the Deutsches Theater Berlin, and at many other theatres with their standing ensemble structure, have managed to substantially update theatre’s most conventional mode – the production of texts – for the 21st century. An established network of international festivals and coproductions has turned this trend into a trademark of contemporary theatre all over Germany, France, the Netherlands, Belgium, and other countries (while, so far, only rarely reaching the UK).

Their productions may fit the category ‘text-based’, yet they go beyond conventionally representing texts realistically or symbolically; instead, they embody, visualize and spatialize their narratives. Thus, mises-en-scène are created which are no longer hierarchically structured, dominated by the God-like authority of the TEXT, nor driven by the representation of narratives, thus presenting them not (only) as discourse but (primarily) as site of experience, and no longer in the dull (British) mode of a dutiful representation (fostered in the UK by an outrageously enslaving copyright system that denies the directors and their ensemble any right of intervention in the staging of a text, a system that was implemented in the 1830s when the middle-classes hijacked the control over popular theatre and still remains untouched and unchallenged today), but of a creative presentation. from Dramaturgy Beyond Representation

… in a section titled “Panorama of postdramatic theatre,” Lehmann comes into his own, collecting performance histories over a broad swathe of contemporary European and U.S. theatre to define a collection of performances for study almost Aristotelian in its breadth. Beginning with the work of Kantor, Grüber and Wilson, Lehmann charts a path through a large body of contemporary performance, with frequent references to younger companies both in Britain and on the continent such as Forced Entertainment and Complicite. This has the salutary effect of drawing old work and new work together as Lehmann identifies qualities common to both: “non-hierarchy” (in which each element of a performance aesthetic is given equal weight in the definition of the experience it intends to present), “plethora” (approaches to a “sensory overload” of theatrical elements that leads a spectator to moments of both confusion and selection), “irruption of the real” (in which events and spatial elements extraneous to the rehearsed and rehearsable performance itself are allowed to affect and in some cases even direct the final public presentation of the performance).

Lehmann is careful to note that his “postdramatic” should not be confused with “antidramatic,” if we are to define the word “drama” as that written artifact which, as a playtext, comes either before or after the theatrical experience itself. What Lehmann suggests is that the text take a more egalitarian place in the constellation of crafted elements and performances that coalesce to an event that can be called “theatrical.” While Lehmann takes many of his examples from the theatre of images (Robert Wilson) and companies which devise their own texts in the process of rehearsal (Complicite), many of his other subjects like Richard Maxwell, Richard Foreman and Heiner Müller see themselves quite as much dramatists as directors, memorializing their stage work in published books and using a written or devised text as the necessary springboard from which their theatrical and scenic imagination takes flight. Indeed, in the penultimate section of the book, “Aspects,” in which Lehmann attempts to define the terminology of a postdramatic performance criticism, “Text” has pride of place as the first of the five theatrical elements he discusses there (the others are “Space,” “Time,” “Body” and “Media”).— from Superfluities Redux