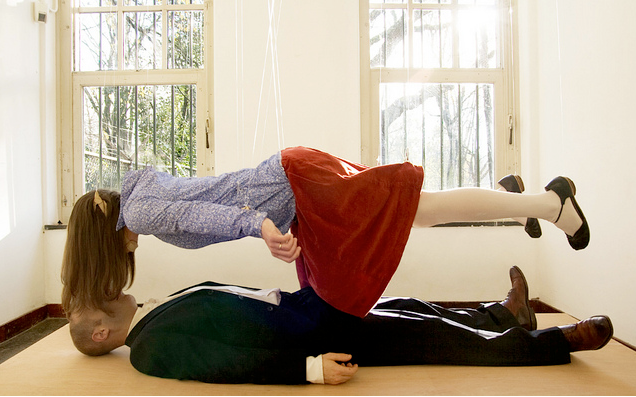 Slow Down Winter Performance Festival presents original productions created by artists who explore the boundaries of performance. It is a festival for artists with a unique view on the world and for audiences unafraid of questioning their own perspectives. A selection of 9 international performance-artist is presenting art pieces which durational nature, giving the audience the freedom of time consumption.

“Paul Virilio’s essay The Aesthetics of Disappearance, considers the motivations and repercussions of a contemporary society fascinated by speed. He notes that the speed at which something happens may change its essential nature, and that which moves with speed quickly comes to dominate that which is slower.

Virilio is precisely attuned to the culturally correlated obsession with moving (driving, flying, riding) at high speeds and viewing moving images. Everywhere, life seems to be speeding up: people talk for example about ‘fast food’ or ‘speed dating’, and these issues become essential while considering the structuring of a society in relation to modern media. Living in an accelerated state of the being, life is passing by. Since the abruption of social networks in the Internet era, this sensation of swiftness has become even more radicalized. The instantaneous communication across web 2.0 and the speed of interactions has created the feeling of a contradiction between an idea of constant presence and that of the disappearance of the body in a constant trajectory of ‘self-dissemination’.

Slow Down Winter Performance Festival, proposes to be a cultural re-action to this emergency situation. Winter is the season when nature takes the time to regenerate itself, a standby period that opens space for reflection and regeneration.

As creative individuals who belong to this hastened society, what the festival curation proposes with Slow Down is to give a time alternative in the mode of an art practice being shared with Others. A committed winter attitude.

Performance is a time-based art discipline, being an ephemeral action that disappears with time, so the practice of such a discipline blends in a perfect way with the questioning of time. Coming from different angles and approaches, the selection of artist/art works, proposes a break in the conventional way of performing. The idea of ‘ongoing’ gives the artwork a specific temporal dimension. The festival is discussing performances whose durational nature offers the audience the freedom of time consumption.”

In the contemporary performance art field, the fragile edge that separates the physical and the political body is frequently expressed as the relationship happening between nature/culture. Linda Molenaar’s last performance ‘Tree Pose’, precisely it focuses the attention on the merging point of both concepts. She is building a new ‘nature’ layer around her (within the form of a tree skin) that instead of isolating, makes her body fuse with the environment allowing the body to express itself through this humanized nature.

In the performance-installation ‘Mind the Gap’ a woman is suspended in midair above a man. The absence of physical contact between their bodies highlights the notion of attraction and isolation that exists between two lovers. With exception of the woman’s hair, which totally covers the man’s face, there is no physical contact between them as though the laws of gravity have stopped and time stands still.

Skype as a video real time face to face communication tool, becomes in this performance a platform concerning the fluidity of our subjectivity. Skype, as a meeting of two video performances, two projections of realities at the same time, is dealing with the core paradox of the balance in between presence and physical absence. A performance by skype is not only a real time screening of a performance, but Double Lents, double screens confronting each other with out no one holding the camera. The screens replace the body. Two reflections facing each other.

Vera Korman was born in Colombia in 1976. She lives and works in Tel Aviv and Amsterdam. Korman utilizes gender related conventions, through an in depth dialogue calling on confrontational expressions of sexuality and gender throughout the history of western art. Her video-performance art work has been lately show in her solo exhibition ‘Banana Split’, at Shay Ariye Gallery in Tel Aviv, or at the permanent installation by Pipilotti Rist at Boijmans van Beuningen museum, Rotterdam.