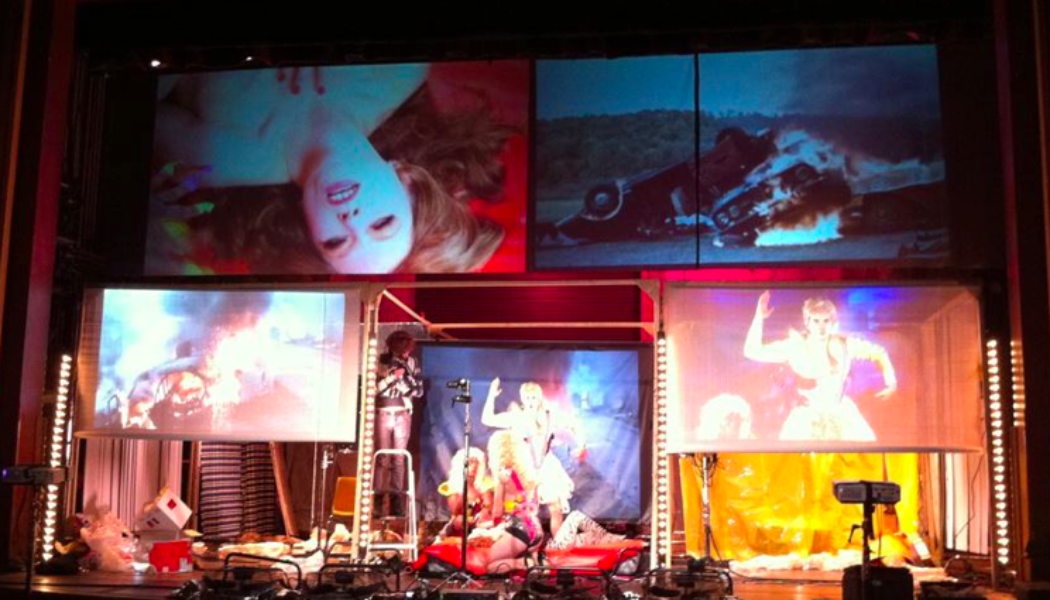 Broke House is a new group performance from Caden Manson / Big Art Group and follows a narrative about the residents of a house and their hanger-on, once a documentary filmmaker arrives to capture their lives. On a skeletal set webbed with video cameras, the characters try to recall their given roles as inevitably the foundations of their dreams collapse, and they are thrown into the desert of their own futures. Part comedy, part ritual, part love spell.

The Performance explores the process of construction, when that process becomes sharply interrupted by historical events, and dissolves into the shapelessness of an aftermath. Those processes that were “building” previous to the play’s beginning include a life, a family, architecture, or a system of beliefs, an economy of values, and the creation of the performance itself. But when events intervene— events like collapse, upheaval, disaster, abandonment, forgetting, fear, and strife— all the raw materials and the players themselves become deformed into a new formlessness, and enter a transitional state of potentiality. Like the pause loop in a video game, Broke House takes place in this marginal time zone.

Like all of Big Art Group’s works, Broke House offers our meditation on the current states of America, which we believe have been in flux for at least as long as our ensemble has been up and running. Beyond the topical symptoms of foreclosure crises, credit crises, occupy movements and extremist rhetoric, we suppose that the metaphorical heart of the country has been suffering, and perhaps has decided to rebuild the body that surrounds it.

Broke House is produced by Big Art Group with support from King’s Fountain and New York State Council on the Arts.

Hot Wings is a charged dance that’s probably feminist, examining artifice and authenticity in representations of sex, gender, and violence. The work follows a cast of three women and a drag queen who are femme, fearlessly engaging, strong, and smart women, as they sing, scream, and dance toward resolution. Looking at how femininity is performed, Hot Wing aims directly at the contemporary fabricated female in a critique that uncovers a deeper feminine truth.

Zombie Aporia is a dance performance that is composed of many small pieces, like a rock music concert, or a book of poetry. The dancers use their voices in order to create an intricate connection between dance and music, so that the dance and the music are both being generated by the very same bodies. The performance breaks down the boundaries that separate body from voice, sound from image, rhythm from meaning.

Zombie Aporia seeks to discover possibility within apparently impossible contradictions: music that is the result of dancing, emotional expression that begins physically, spontaneous feelings that are designed, words that give more of a sense of vibration than meaning.

(M)imosa is a choreographic collaboration between Cecilia Bengolea, Francois Chaignaud, Marlene Monteiro Freitas and Trajal Harrell. The work is the third installment of Harrell’s Twenty Looks or Paris Is Burning at the Judson Church, a series of five works in five sizes (XS to XL). The series revolves around the proposition “What would have happened in 1963 if someone from the voguing ball scene in Harlem had come downtown to perform alongside the early postmoderns at Judson Church?”

(M)imosa is a performance by four choreographers investigating the collision of voguing culture, postmodern dance and the artists’ own personal and artistic identities, exploring the intensity of the fault between the desire and the impossibility of becoming another person.

Me, Michelle is a duet between Jack Ferver and Michelle Mola, which takes on the forever-mysterious Queen Cleopatra as a vehicle for two performers to uncover the truths about iconography, monarchy and themselves. Ferver offers a manic meta-characterization of Cleopatra during the infamous icon’s final days. Attended by Mola’s portrayal of his/her servant, the two engage in funny, vicious and tragic psychosexual games that vacillate between the childish to the sociopathic. Through coiling layers of performance ranging from the histrionically grand to the restlessly personal, Me, Michele illustrates how ego fueled by total power can turn into annihilation and the sadomasochism that can exist between gay men and heterosexual women.

This piece was made especially for the Tanzquartier in Vienna under the stewardship of Sigrid Gareis in 2008. The event bore this unlikely title: A Precise Woodstock of thinking. I was asked to consider the future of performance. Hmmm… What to do? My own future was more-than-unusually uncertain at that moment, which created a lovely calm about the whole business as projections seemed un-urgent, unnecessary, inappropriate . I made the only thing I could which I still enjoy doing. The very pretty irony is that performance has no legitimate concern with the future. And also, this version of the future is a bit dated. Lovely. Please Come.

CPN google calendar of schedule below.