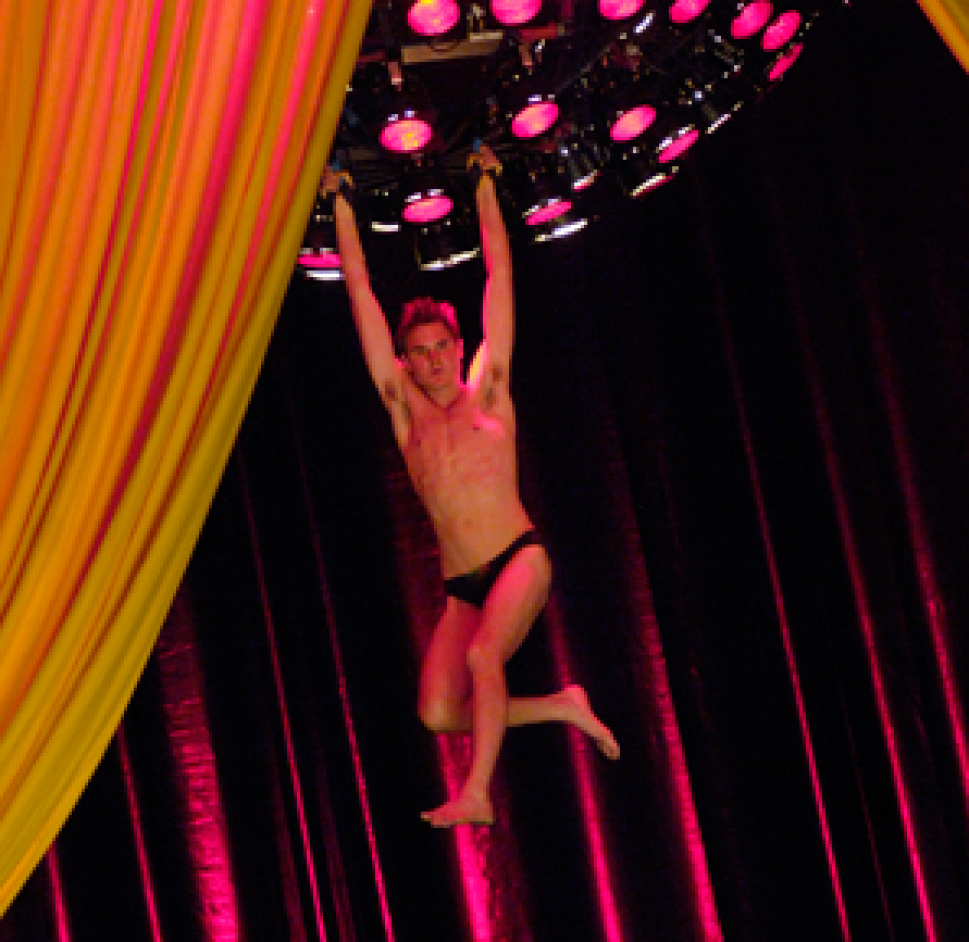 The Festival Bo:m is an international festival of performing arts and visual arts that is multi-cultural as well as multi-genre.

The Festival Bo:m produces art works and productions by Korean as well as international artists whose works represent an unique vision in their art.

The Festival Bo:m will introduce innovative and avant-garde Korean and international art works.

The Festival Bo:m values the spirit of experimentation and challenge, and places the focus on discovering new artists which are at the heart of the festival.

The Festival Bo:m strives to introduce artists with diverse cultural background especially from Asia on the international stage.

The Festival Bo:m will be held for three weeks in spring every year. This year the festival is scheduled from 22th March to 18th April, and the exhibition and productions will be held at different places in Seoul.

Hinrichs’ passion and wisdom, cries and sophistry captivate the audience with explosive energy and assert a unique theatrical language which transcends the level of representation. This clown-lecturer full of characters takes the wisdom on economic reality to the realistic insight on the form of theatre. The possibility of transformation starts on stage.

“The crisis in the financial markets has triggered irrational turbulence and my body is still not aware of the disaster! In fact, there is nothing but passiveness or asceticism. The financial crisis is a turbulent comedy of mistaken identity. But what has been mistaken then? There is nothing there! The engine of the capitalist economy is based on self-referring communication. Prices do not refer to goods, but to other prices, which ultimately leads to de-presentation of the world.” [René Pollesch]

“For me, choreography is about the body, and the body includes rhythm, shape, design, scent, taste, sexuality, politics, emotions, thoughts, voice, expression, history, the present, the future.” [Daniel Linehan]

The works of Daniel Linehan, an emerging dancer and choreographer winning international attention since his graduation from P.A.R.T.S., begin like a game with simple rules and move on to a delicate process which establishes an intricate device that provide time-space context to pure movements.

His duet ‹Montage for Three› is a certain ‘image-choreography’ devised from found photographs, where two dancers try to achieve an absurd and impossible aim of giving presence to what is absent.

‹Not About Everything› is a solo based on one simple and childlike movement; Linehan creates an interesting yet complicated flow with a series of variations, acceleration, and subtle shifts.

As a theatre-documentary, ‹Crossroads› contains documentary footage and the dramatic reenactment of the mansin’s episodes during the Korean War. The film combines the story of the mansin, who had been threatened many times during the war by both South and North Korean soldiers to be shot to death, with the jinogui-gut held in the Enemy Forces War Cemetery in Gyeonggi Province. Located in Paju, Gyeonggi Province, this war cemetery is where remains of the North Korean and Chinese soldiers dead in the Korean War.

Jinogui-gut in this site of pain and sorrow is depicted along with the interview of the novelist Suk-young Hwang and the documentary footage of reunification gut by mansin Keum-hwa Kim, overlapping the borders of time and space, and between reality and fantasy. The video is followed by his lecture on Asian Gothic as a concept of mythical and fundamental force which transcends the regime of modernity.