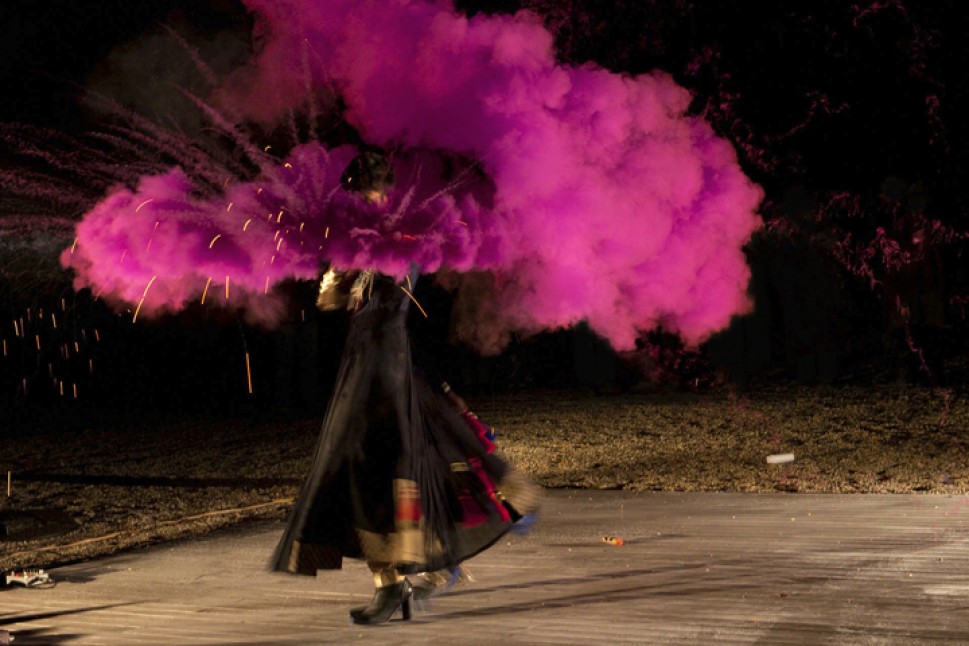 “They say blondes have more—more money, more sex, more fun. My experience says it’s true. Artifice=Advancement. So, where does that get you? A Sunday afternoon slot in a geodesic dome in Long Island City and a piece of fish.”

Performances, Music, and installation from 3pm – 6pm in The Performance Dome.

Mx. Justin Vivian Bond:
Mx Justin Vivian Bond is a writer, singer, painter, performance artist, and activist. Mx Bond is the author of TANGO: My Childhood, Backwards and in High Heels, a novella-length memoir published by The Feminist Press and Susie Says… a collaboration with Gina Garan (Powerhouse Books, 2012). V’s debut CD DENDRPOPHILE was self-released on WhimsyMusic in 2011. Also in 2011 Justin Vivian’s art exhibition The Fall of the House of Whimsy was presented at Participant Inc. in New York City. Mx Bond was nominated for a Tony Award for Kiki and Herb Alive On Broadway in 2007. Other notable endeavors include originating the role of Herculine Barbin in Kate Bornstein’s groundbreaking play Hidden: A Gender, touring with the performance troupe The Big Art Group and appearing in John Cameron Mitchell’s film Shortbus. Mx Bond is a recipient of The Ethyl Eichelberger Award, The Peter Reed Foundation Grant, and The Foundation for Contemporary Arts Grants to Artists Award for Performance Art/Theater, an Obie and a Bessie. Please visit www.justinbond.com to download and enjoy v’s music and blog, Justin Vivian Bond is Living!

Caden Manson:
Caden Manson is Editor and Curator of Contemporary Performance Network and co-founder and artistic director of Big Art Group, a New York City performance company founded in 1999.  He has co-created, directed, and scenographed 12 Big Art Group productions. Manson has shown video installations in Austria and Germany; performed PAIN KILLER in Berlin, Singapore and Vietnam; Taught in Berlin, Rome, Paris, and Montreal; his ensemble has been co-produced by the Vienna Festival, Festival d’Automne a Paris, Hebbel Am Ufer, Rome’s La Vie de Festival, PS122, and Wexner Center for The Arts. He is a recipient of the 2001 Foundation For Contemporary Art Fellowship, is a 2002 Pew Fellow and received a 2009 Fellowship from the Pennsylvania Council on the Arts.

Theo Kogan:
Prior to forming her band Theo and the Skyscrapers, Theo Kogan traveled the world as singer of the legendary all-female rock band Lunachicks. As an actress she has worked with Martin Scorcese, Jane Campion and Ben Stiller. She’s also acted in the edgy cult classics; High Times Potluck, Tadpole, and the animated feature Live Freaky Die Freaky. TV credits include hosting the show “Pants Off, Dance Off” and appearing on “Law And Order SVU”. Her avant-garde theater work includes writing and performing internationally on multiple shows with Big Art Group; performing and co-creating ‘Screen Test’ with director /artist Rob Roth, playing a singing angel named ‘Blue’ in ‘Prozak And The Platypus’ in the Summer Play Festival and guest performing in ‘Rotozaza’ at PS 122.. As a model, Theo’s worked as a model on the campaigns of Calvin Klein, Burberry and Kenneth Cole to name a few. She runs her own lip gloss company called Armour Beauty and is also a makeup artist and mom.

Viva Ruiz:
Viva Ruiz is an EcuaYorquina from Jamaica Queens, a multidisciplinary performance artist whose work draws from the energetic power created when diverse cultures intersect, inform, and mutate the other. Viva is currently in ongoing musical collaboration with renowned mad scientist Gavin Russom as the pop group THE CRYSTAL ARK (DFA), and renowned art world monster Desi Santiago as the house group ESCANDALO. She is a featured vocalist with NYC producer/DJs Will Automagic and Nita Aviance in their supergroup THE CARRY NATION with a first single “This Bitch is Alive” out on London’s Batty Bass label this spring. As CHOCOLATINA PRODUCTIONS Viva is writer/director/producer/creator of music videos and independent telenovelas ROSA NEGRA, MONJA SATANICA and IMMIGRANTULA, which have premiered/screened at Deitch Projects NYC, international film festivals and most recently ps1 MOMA. A lifelong dancer, Viva has choreographed/performed with many (inc. Debbie Harry, Danzig) in addition to being a mother in the House of Dazzle Dancers for many years. She is honored to be a part of the Big Art Group multimedia performance commune. Viva is one part of the collective of creative forces at SUBVOYANT, a production and post team lead by Jason Cacioppo and through which all Chocolatina Productions are birthed. Viva represents as priestess of ceremonies, in collaboration (with Antony, Rosario Dawson, Kelly McGowan, Richard Alvarez, many more) of the newly annual CHLOES, an awards ceremony that honors activism in the the world of transgender issues and beyond. The 2nd annual ceremony is MAY 10th 2012 at Judson Church. THE CHLOES are named after Viva’s love warrior mentor Chloe Dzubilo, a high profile punk rock singing long term AIDS survivor transgender being who took activism to magnificent heights before her too soon passing last year- and whose spirit Viva will be invoking in this performance this day.

Jack Ferver:
Jack Ferver premiered his duet with Michelle Mola, Me, Michelle this November at the Museum of Arts and Design as part of Performa 11. It returned as part of American Realness at Abrons Art Center. Ferver’s solo Two Alike, a collaboration with the visual artist Marc Swanson, was presented at Diverse Works in conjunction with The Contemporary Arts Museum of Houston in September and will premiere in New York at the Kitchen this coming May 17th – 19th. Ferver has been creating full-length works since 2007. He has been presented at PS 122 (NYC), The New Museum (NYC), Danspace Project (NYC), Abrons Art Center (NYC), Dixon Place (NYC), and Théâtre de Vanves in France. Shorter and solo works have been presented at Dance New Amsterdam (NYC), LaMaMa E.T.C. (NYC), The Culture Project (NYC), and NP Gallery (NYC). His work has been written about in The New York Times, The Financial Times, The New Yorker, Artforum, Modern Painters, and Dance Magazine. His writing has been published in the magazine Novembre. He has curated for Danspace Project, Center for Performance Research, and Dance New Amsterdam. He teaches privately as well as at New York University and has set choreography at The Juilliard School.www.jackferver.org