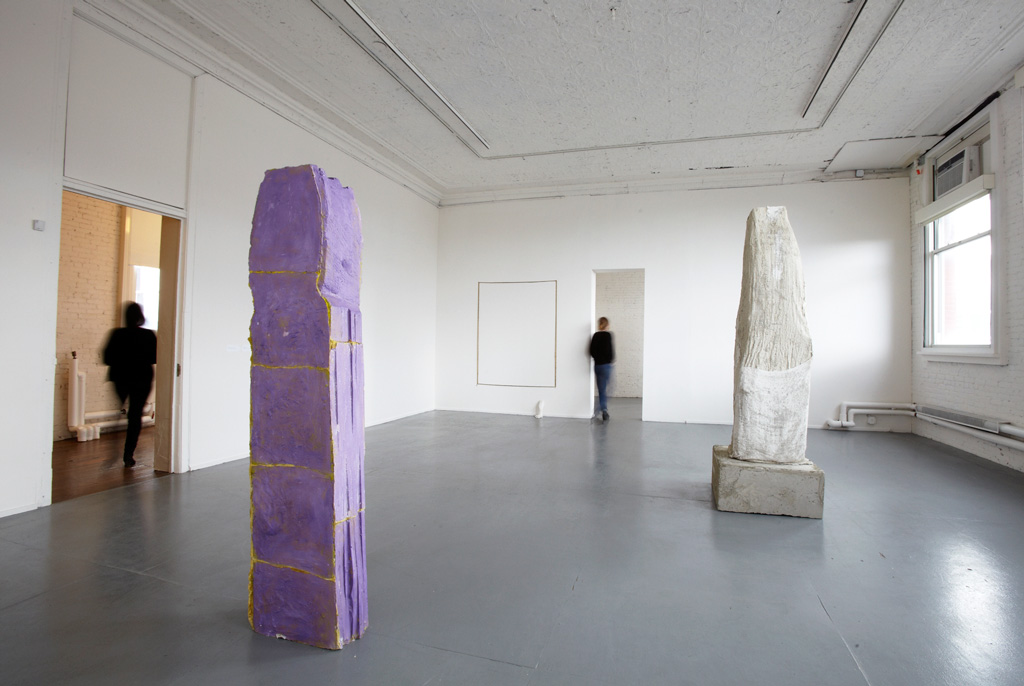 One’s typical reading and research on Esther Kläs would lead to a discussion over self-generated sculptural work, the fluidity of her creative process, and an overarching sense that Kläs was born to be a sculptor. This visit inside of the artist’s work will not aim to discuss the merits of her sculptural process. Stepping into the naturally lit room on the third floor of MoMA PS1’s transformed public school, (this particular room closes at 5pm for lighting purposes) I entered with skepticism and left with my body spinning delirious. Whether Kläs is aware of it or not, her sculptures force the spectator’s body to frenetic limits. At this point in the discussion between performative installation works and visual arts performance, her work introduces a new element that is oftentimes forgotten about by her contemporaries: the activation of the spectator’s body.

It is only appropriate that this exhibition resides in the school hallways of MoMA PS1, an abandoned public school that was transformed into an experimental arts center in 1971. The entire experience of walking through the museum is already destabilizing: windows overlooking the skylines of Long Island City and Manhattan, warm breezes from natural sources, it is a far cry from the conditioned air and vacuum sealing of other respected arts institutions in the city. It is appropriate because walking through the door brought me in natural lighting and open windows, open space. Without strongly thinking about it, I began to walk in circles around the two small monoliths in the first room of the space. They resembled plaster that was baked with its color pigments already injected, melting and forming on its own. I walked endless circles around them, spiraling from one to the other. This is where the space becomes disorienting. As there is no gallery lighting and the outside walls have windows, the experience of focusing on each monolith while circling it was at once liberating and vertiginous. If one thing can be said about the exhibition, it is contradiction. I spoke with my friend who was working in the gallery and she told me that oftentimes in the early mornings when no visitors are around, she dances around the sculptures. They demand it. And this was the elusive sentiment that I tried understanding, why did my body want to move without stopping? The exhibition could not exist were there no bodies moving through it, the detached bodies of the audience are the finish to the Kläs’s endeavor. The sculpted work did not so much serve as decoration in the space, it served as context for the bodies visiting it, it created a not-so-rigid structure that one wants to rise above and see her body move through.

Upon entering the second room, (shown above) the free movement that the first room demanded met the contradictory nature of the exhibition. The second room was fragile. Not so much fragile in the sense of material, but fragile in the sense that it could fall apart as a result of my delirious movement started in the first room. When I wrote earlier about detached bodies or rising above the works, I was referring directly to the sentiment of danger and caution that the second room evokes. I had already been activated as a museum guest, I was no longer just looking at sculpted materials, I was adding on to them, I was beginning to understand that the force of the exhibition depended on my physical presence ghosting along. Yet this small two-room exhibition goes beyond simple activation because of its contradictory nature. Suddenly stepping into the second room with my disoriented body, I became aware that I must also keep a strong eye on my body. I rose above it in a near-hallucinatory fashion, letting my body move through and through, constantly moving, looking out of the window, walking in circles, breathing in circles — all while my mind watched my body zig-zag, the alien observer holding on to just the slightest amount of control.

It is simple work. Yet visual artists who are new to time-based arts could stand to learn a bit about set design and proper lighting for achieving dramatic effect. We are all familiar with Chris Burden shooting himself in the arm or Marina passing out inside of a burning cross, putting their bodies in danger to prove their physical presence, that they exist. Yet have we considered enabling this physical presence in an audience member? By putting her entire exhibition in danger, Kläs is forcing the spectator to explore his physicality, his necessity, and his body grounded on a floor, not somewhere in a photograph or the Internet.