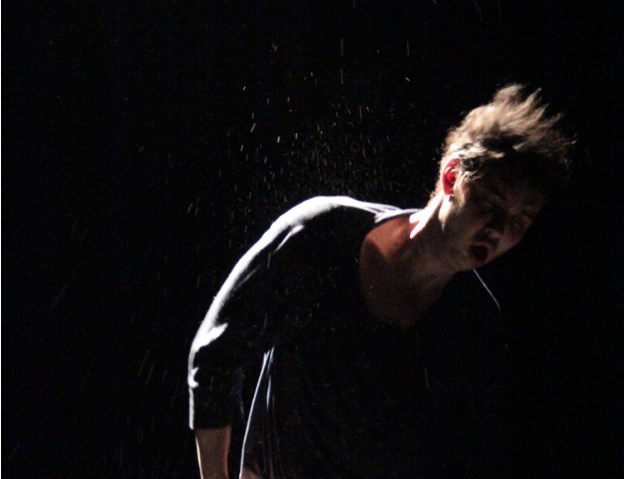 Every two weeks, members of the network vote for one of the top 10 most active CPnetwork artists to be featured on the home page and interviewed for the blog. Contemporary Performance Network would like to introduce you to our most recent Spotlight Member, c.ia Danza Flux (Napoli, Italy)

c.ia Danza Flux is a contemporary dance company founded in Naples in 2006 by Fabrizio Varriale and Chiara Alborino. The company developed during the years a work based on movement research and put together the experience of physicality with a research of dramaturgical processes.

In 2009 they participated in the Festival Insoliti in Turin (Italy).

In 2010 they took part in the international project of choreographic residency Movement T, (France). In 2010 they were invited to attend the 9th International Festival Danzalborde, Valparaiso, (Chile) with the support of the Universal Forum of Cultures of Naples. The company had also conducted lessons on contemporary dance and choreographic research about the project “Basi Studio Fisico” at the U-Arcis University of Pedagogy and Dance of the city of Valparaiso in (Chile).

In 2011, they participates to the Festival Teatri di Vetro 5, at the Teatro Palladium in Rome (Italy) with the project Black Longhair’s Trip. In 2011 Fabrizio Varriale danced in “Poetry Events” by Carolyn Carlson produced by the Centre National Choréographique Roubaix Nord-Pas de Calais, at the Teatro San Carlo in Naples. The company is currently working on a new production for the Fringe Festival in Napoli Teatro Festival Italia for 2013.

Can you tell us a little about your history and your performative concerns.
I was born first of all as a dancer, and I worked for years for other coreographers. It has always been important for me to study dance and in particular I was interested in a contemporary approach to movement. I’ve always been fascinated with the development of my own physical language and by both the logical and the non-logical patterns that govern the body when one moves. I realized when I was eighteen years old that I would spend most of my life studying and researching the body. After my first experiences working with some contemporary companies like Tir danza of Teri Jeanette Weikel, and travelling a lot in Europe I decided to start my coreographic work and in 2006 I founded the Compagnia Danza Flux, establishing it in my own dance studio Danza Flux in Naples, Italy, where I also became to teacher.

So I have united both the coreographic research with other pedagogical and didactic aspects of contemporary dance. With the Company I started a new interesting experience, bringing my work also abroad, like in France for the Movement T in Brest and in Chile, taking part to the Danzalborde.

What projects are you working on now?
In this period I’m working on a new project which is a solo dance which I named “Horse Boy in Apnea”. In this work I just put together my theatrical and phisical research, in the sense that I would like to really transform the body language and building a set where the body can live an experience of moving trough a dramaturgical path. The body in this my project is my main focus, and I ask how a phisical structure can move as an animal, by capturing all the senses and images through my movement experience. The boy I imagine is me, and I realise in the time of the development of the process a moment of apnea, where it seems to have no time, as I go out for a moment from the theatrical scene, to go deeper in the consciousness of the spectator, and to put him with me in both a reflection and a sensitive experience. Meanwhile something other can happen, so I let the dramaturgy coming naturally out from my inner mood or my thoughts and images.

I’m also working on dance projects that involve more dancers, because I like to share the experience of the dance with other people, and I also like to see how the creative process is able to transform people and to make them able to enter in somewhere and to express through the body language. The process that involves more dancers was born from a residential project called Danze di Ricerca, a period of research where we decide to stay in the research and to experience new patterns.

What are the biggest performative obstacles for yourself in these works (either past or the one you are working on now)?
I believe that the most beautiful and difficult aspect of a coreographic creation is to face many questions that arise during the process. It is important to be really focused on the inner creative aspects. I ask above all how to make my imagination and creativity come out in an “easy way”, for I want to live this experience in a constructive way. I want to always renew the path to build and deepen the capacity of bring my imagination into communication of a personal feeling or physical experience in a visionary and dynamic creation.

What was the last piece that you saw that you would recommend to the Network and why?
The last peace I saw was by Peeping Tom company “32 rue vandenbranden”, last year in Rome in the festival Equilibrio, the show really impressed me so much for the strongness of the meanings and the theatrical and phisical skills of the dancers. I found it very interesting the way they put togheter the different scenes, never boring me but keeping always high my expectation and making me able to taste the feelings and the attitudes of the dancers on stage. I found it very charming the scenography and the atmosphere that was created, so magic and misterious, and the music patterns alternated to the natural voices were also capturing my interest. I recommend this show to al the net because I think the Peeping Tom is one of the most interesting contemporary companies of our time, for the capacity to transform the body attitudes into a deep dramaturgical research.