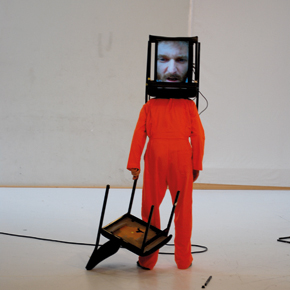 Since 2000 Tanznacht Berlin is paying tribute to dance made in Berlin by presenting the artists and their work. The 7th edition continues this biennial tradition, but one single night is not enough: from 22 till 26 August TANZNACHT BERLIN 2012 presents new works and current trends of nearly 75 Berlin based artists.

The festival reaches its peak on the 25 August with an especially full programme of 12 hours of dance. From noon till midnight we present up to 20 different dance performances, premières, installations and one-to-one-performances. Put your own individual programme together and follow us through the festival. Use breaks to attend one of the sommer.talks, take a seat in The Waiting Room or simply relax on the extensive premises of the Uferstudios before visiting the next performance.

With X-Choreografen the festival goes ‘local’ at the Kurfürstendamm, looks back at Berlin’s past in Oral Dance Histories, works with children from Wedding in Ufer/Outside and We are the Monsters, unites hip-hop and contemporary dance in The Battle and poses questions about our relationship to Berlin in Metabolic Metropolis. (source: Tanznacht Website)

Imagine a place that defies your senses. Imagine rhythms that affect your vision. Imagine a room where the dimensions of the space appear resilient. Imagine the pressure of sound transforming a body into vibrations. Imagine light that makes you perceive darkness. Grind offers this place to you – where the components of bodies, light and sound create connections that affect, confuse and move. Inspired by synesthesia, the performance seeks to challenge our grip on reality by suspending our senses and short-circuiting perception.

In order to capture the history of contemporary dance in Berlin, Pe- ter Pleyer, Andrea Keiz and Arianne Hoffmann have adopted the tradition of oral transmission. Through personal interviews the protagonists, guides and innovators of Berlin’s dance scene express themselves in collaborative embroidery – including Irene Sieben, Ka Rustler, Felix Ruckert, Diego Agulló, Dmitry Paranyushkin, Nele Herting, Wibke Janssen and Kirsten Seeligmüller. Their anecdotes and views on the history of dance in Berlin are collected by the exhibition initiators in an exhibition of needlework, accompanied by edited sound recordings and selected photographs.

Fountain is a solo by Jeremy Wade that has been evolving since early experiments in 2010. The work proposes a generative sphere of uncertainty. Wade circumvents traditional audience-performer dynamics and facilitates a generous group experience that evolves into a sensual engine. Wade assumes the role of preacher, shaman, and fool, by offering himself as a medium to receive and transform the energy of the theater space taking the audience on an emotional and alchemical journey. Wade’s choreographic technique is a unique encounter of aesthetic, sociological, and neurological dimensions. He derives movement from intense attention to the multiplicity of impulses in the body that are drawn from neurological processes, social constructions of norm, and aesthetic decisions. The stage becomes an engine where the intersubjective actions/ reactions are propelled into space enveloping the audience for maximal sensation and association.

Der grüne Stuhl – by which we generally understand a piece of furniture to sit on and of a certain colour. Its purpose and possibili- ties seem largely known. In his work the French choreographer Clément Layes continually places this fundamental knowledge about the world of things in question. In the crossfire of artistry, philosophy and dance, a simple chair raises fundamental questions of life, places certainties in question and invalidates physical laws. With Der grüne Stuhl, Clément Layes exactly encircles that hidden gap between the simple word and the seat itself.