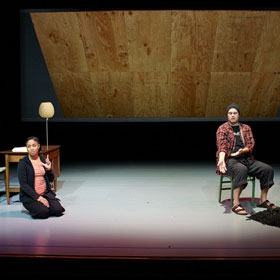 Under the Radar (UTR) is an annual theater festival that spotlights international artists ranging from emerging talents to masters in the field. The festival is a wild mix of works by ensembles, solo artists, writers, and creators. The ultimate goal of UTR is to offer a crash course in theater that is exciting, independent, and experimental, created by some of the most dynamic artists working today. In its eight year history, there have been 104 productions from over 17 countries and the U.S., including Australia, Belarus, Bolivia, Brazil, France, Ireland, Mali, Mexico, The Netherlands, Russia and the UK. Some artists who have collaborated with UTR include SITI Company, Elevator Repair Service, Nature Theater of Oklahoma, Superamas, Abbey Theatre, Mike Daisey, Reggie Watts, Teatro De Los Andes, and many more.

The festival premiered at St. Ann’s Warehouse in January of 2005, focusing primarily on theater companies based in the United States. In 2006, UTR moved to The Public Theater to place itself in the heart of the American theater. In its second year, UTR branched out further into the international theater community. This festival featured performances from Brazil, the Netherlands, Australia, Indonesia, France, Austria, the United Kingdom and the U.S. The tradition continued in 2007, as the festival once again highlighted contemporary and independent work from around the world. The festival was expanded from five days to its current two week format.

Below are Contemporary Performance’s Highlights

The Public Theater Presents
The Soho Rep Production of
Nature Theater of Oklahoma’s Life and Times: Episode 1-4
Conceived and Directed by Pavol Liska and Kelly Copper

When can the ordinary become extraordinary and the mundane monumental? “Epic stories need epic forms,” says Nature Theater of Oklahoma, making their triumphant homecoming with this bold, exuberant 11-hour celebration of the most epic story of all: life. Life and Times: Episodes 1-4 charts one person’s account of their own life from earliest memory through adolescence with music, movement and mystery. It’s about you, too!

When can the ordinary become extraordinary and the mundane monumental? “Epic stories need epic forms,” says Nature Theater of Oklahoma, making their triumphant homecoming with this bold, exuberant 11-hour celebration of the most epic story of all: life. Life and Times: Episodes 1-4 charts one person’s account of their own life from earliest memory through adolescence with music, movement and mystery. It’s about you, too!

The four episodes of Life and Times being presented can be seen in installments or together as a “marathon.” Life and Times will run from January 16th to February 2nd.

Kelly and Pavol discuss the inception and making of Life and Times hereâ¦
Join Soho Rep’s FEED Humanities program and The Public’s Under The Radar for three pre-show discussions cracking open the world of Nature Theater of Oklahoma’s Life and Times. All events take place at The Robert Moss Theater, 440 Lafayette Street, 3rd Floor, directly across from The Public from 6pm to 7pm. Events take place before showings of Episode One. Free and open to the public.

An enchanting mix of drawing, animation, puppetry, projection and paper, 2 Dimensional Life of Her is a richly imagined performance installation set in an artist’s studio. Fleur Elise Noble creates a parallel world in which everything thought to be flat becomes something else. In this illusionary, captivating and cheeky work, visual tensions build and realities pile up until the artist loses control of her creations and absolutely anything becomes possible…

Fleur Elise Noble works with various visual art mediums and performance to create work that is specifically focused on the performative possibilities of drawing and process. Her work has been exhibited in established and makeshift gallery and theatre spaces around Australia and overseas, and included in major international arts festivals.

“Noble not only deconstructs her art, she shreds, incinerates and rebuilds it, milking the full potential of today’s multimedia technology like an Andy Warhol for a new era.” — The Adelaide Advertiser

Winner of the 2010 Greenroom Award for Video Design and Best in Show at the Brisbane Festival, 2 Dimensional Life of Her is 90% visual and suitable for ages 8 and above.

Supported by The Jim Henson Foundation

A meditation on how Henry David Thoreau’s Walden changed a man’s life; on the disruptions and re-imaginings that followed the tsunami and subsequent nuclear disaster at Fukushima; and on the uneasy compromises between radical idealism and contemporary living. An unusual, cerebral work of autobiography brings together Okadaâs sly, idiosyncratic writing and Pig Ironâs precise, physical performance spirit.

Pig Iron (Chekhov Lizardbrain) is one of the most inventive physical theatre companies in the U.S. Having trained in the movement style of Toshiki Okada and his company chelfitsch (Hot Pepper, Air Conditioner and Farewell Speech), Pig Iron is the first English-language company to premiere Okadaâs work.

“Beginsâ¦ to pry open those provocative ideas about philosophy, politics and shelter.” – The Washington Post

This project is partially supported by a grant from Pennsylvania Performing Arts on Tour, a program developed and funded by the Heinz Endowments; the William Penn Foundationl the Pennysylvania Council on the Arts, a state agency; and The Pew Charitable Trust; and administered by Mid Atlantic Arts Foundation. The creation of Zero Cost House was funded in part by the Pew Center for Arts and Heritage through the Philadelphia Theatre Initiative; by the MAP Fund, a program of Creative Capital supported by the Doris Duke Charitable Foundation and the Rockefeller Foundation; by the Japan Foundation through the Performing Arts JAPAN Program; by the Independence Foundation New Works Initiative; by the Asian Cultural Council; by the National Endowment for the Arts, which believes that a great nation deserves great art; by the Saison Foundation; and by the William Penn Foundation. Zero Cost House was developed with support from PlayMakers Repertory Company, Joseph Haj, producing artistic director.

View the full schedule at Under The Radar