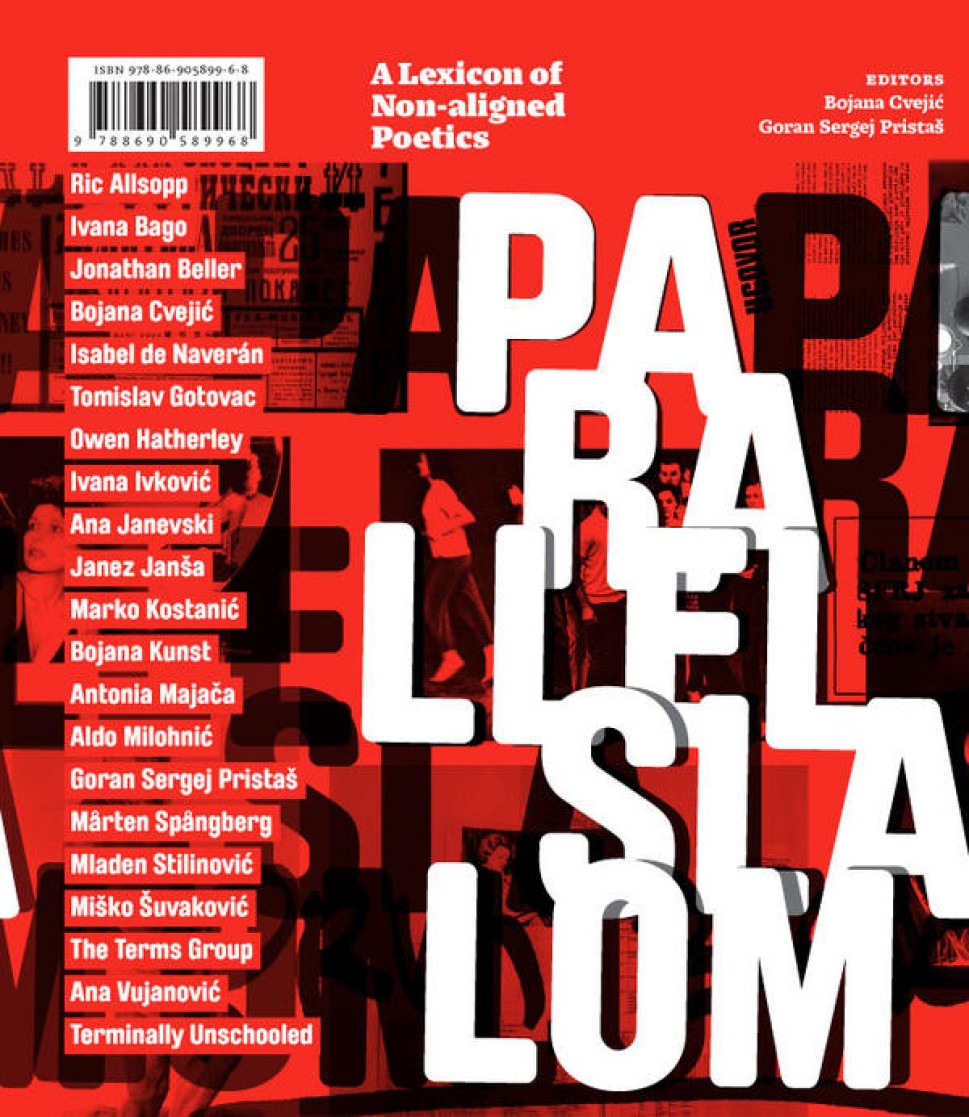 PARALLEL SLALOM
A LEXICON OF NON-ALIGNED POETICS
The price of the book is 20€.

What does it take to create one’s own concepts? What does it mean toown a concept? Parallel Slalom: A Lexicon of Non-Aligned Poetics is an edited collection of essays that attempt to address these questions from the viewpoint of artistic and theoretical practices that have been developing since the 1960s, especially in the period after the breakup of Yugoslavia in 1991. Artists, dramaturges, theorists, editors, writers or ‘cultural workers’ who write or are written about in this volume don’t always belong to the same historical, geopolitical and cultural framework that the curator Ješa Denegri called, the ‘common Yugoslav cultural space’ also because a considerable number of writers come from contexts other than those in Eastern Europe. Yet they share a kind of thought that arises from within, or close to, artistic practice as a poetical instrument of looking past art into the production of political, social and aesthetic realms.

Many notions explored in these essays have either emerged in reflection of principles, procedures, manners, moods or modes of art production, or they have served to cross-check, re-cut, or recompose art works, movements, tendencies, contexts and lived experiences according to poetical and political problems that may not have been foregrounded as identifying features. What makes them nonaligned is that they are neither curatorial nor technical terms, nor do they effectively represent what is essentially Yugoslav, East-European, or for that matter, exclusively of artistic or theoretical provenance. The reason why, “artists’ pages” presenting performance artists from the Yugoslav context are “empty” while theorists from the East continue to rehearse discourses on Western art (Pristaš), is the peculiar position of both this thought and these art practices that cannot be adequately accounted for by post-colonial theory and other academic variants for representing difference and otherness in culturalist logic. It is equally dissatisfying to regard them by the aesthetic criteria of a hegemonic view of modernity, for which many artists, works, concepts or tendencies discussed here would appear not––individualist, pure or original, disinterested or radical, crafted or savage, and above all, recognizable–– enough. By contrast, they often qualify as too––collectivist or contextual (Termini), bungled or “second-hand” (Vujanović), over-informed but “unschooled,” hybrid or bricolé––to merit special theoretical attention. They might pass as aesthetically unnoticed or dull because they are radically amateur (Milohnić) or aesthetically “unburdened” (Cvejić), that is, indifferent to the imperative of branding themselves through the genealogy of medium-specificness or style.

The book is written in English.

The book is realized as a part of the activities within the project TIMeSCAPES, artistic research and production platform initiated by BADco. (HR), Maska (SI), Walking Theory (RS), Science Communications Research (A) and Film-protufilm (HR) with the support of the Culture programme of the European Union and Ministry of Culture and media if the Republic of Serbia. (Source: Parallel Slalom A Lexicon Of Non-Aligned Poetics Press Release)