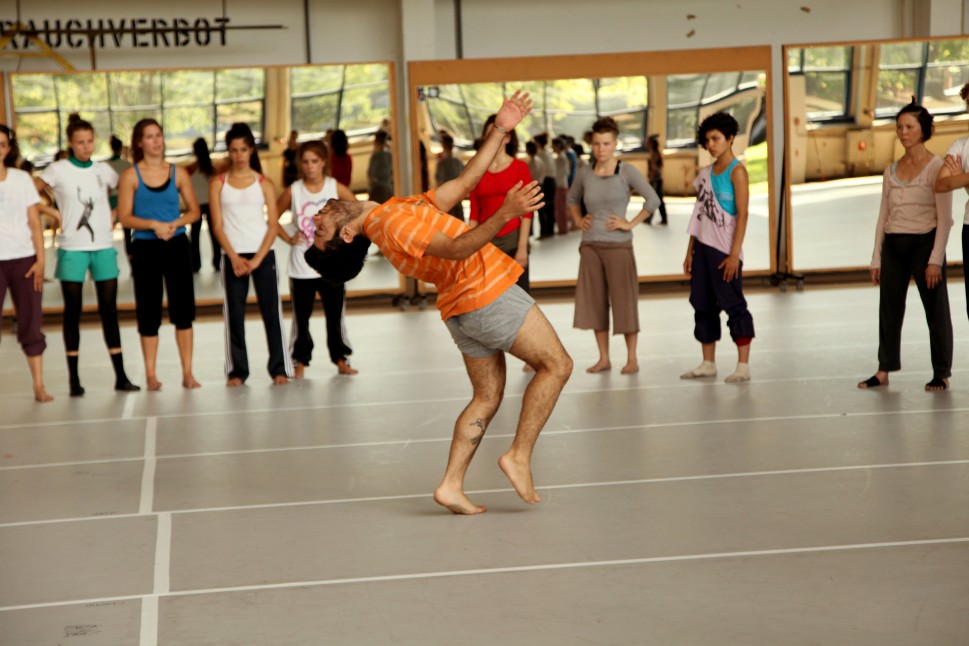 What does an over-sized blue elephant and an Oscar winner have in common? How does a contemporary “Schuhplattler“ open new perspectives on folk dance? Who sings of nature, standing half naked in a chilly leafy forest? And to which beats does Harlem actually shake, why is Greenwhich Village not moved by this, and what’s that all got to do with Vienna, anyway!?

This and a lot more is going to be explored by the 30th edition of ImPulsTanz – Vienna International Dance Festival, in more than 50 productions, from July 11 until August 11,
2013.

As of immediately, tickets can be bought online at www.impulstanz.com!

ImPulsTanz #30 will be opened on July 9 at 9.15pm by Trajal Harrell & Friends who fetch ecstatic house beats and glittery costumes out of New York’s underground clubs of the 80s in order to present them in the fascinating voguing show “ImPulsTanz@30: License to Party“ to Vienna’s audience in MuseumsQuartier. Admission free!

On the same evening, the party moves on to the ImPulsTanz festival lounge: with the live act “Austrian Apparel“, Burgtheater Vestibül opens its gates for 32 summer evenings again and thanks the audience for the 10th issue of the lounge with this year’s motto “Because of you.“. The following performance programme gives insights into the fascinating universe of contemporary dance and performance art: with international highlights, a collaboration with Weltmuseum Wien, the reputed newcomer dance award Prix Jardin d’Europe and an extensive series of works featuring New York choreographer Trajal Harrell. Fast, precise and one of the most challenging key works of contemporary dance – for the first time in more than 30 years, Wim Vandekeybus and Ultima Vez show their masterpiece

“What the Body Does Not Remember“ in a revival at Volkstheater. It is there, as well, that the internationally renowned South African artist William Kentridge with his ensemble of 15 members (including Kentridge himself) puts on the dadaistic multimedia performance “Refuse the Hour“ for the first time in Austria.!

A dream seems to become true: the body flesh learns to fly – in the new choreography of Viennese choreographer Doris Uhlich, “more than naked”. A performance-astronaut crew confronts itself with Beethoven, Rachmaniov and many other music heroes in Meg Stuart‘s successful and humoristic performance in collaboration with Münchner Kammerspiele. Back from “Berliner Theatertreffen“: Jérôme Bel & Theater Hora with “Disabled Theater“, ready to throw common clichés about people with disabilities over board. And Ivo Dimchev pursues his talented path on the Late Night Series [WildWalk] with a new piece about dance festivals.

Keyword late night! Philipp Gehmacher arranges a performative meeting of a special kind where Tim Etchells, Mathilde Monnier and further notable dance and performance guests speak about the act of speaking at Burgtheater.

In the realm of European-American dance tradition, the only way to contemporary is via physical exhaustion – this issue is certainly tackled in Alessandro Sciarroni’s “Schuhplattler“ and Mathilde Monnier’s couple dance marathon but also in Louise Lecavalier’s resp. Cecilia Bengolea’s and François Chaignaud’s electrifying club rhythms.

That’s home to Trajal Harrell, whose choreographic achievements over the past years will be taken up by ImPulsTanz in form of a worldwide unique presentation of his works. All six performances of his ground-breaking series “Twenty Looks or Paris is Burning at The Judson Church“ will be staged at ImPulsTanz together with a performance ritual in honour of Stravinsky’s 100th anniversary of “Le Sacre du Printemps“.

As a guest in the newly re-opened Weltmuseum Wien, ImPulsTanz looks for an encounter with dance and body practices from Asia – under the curatorship of Michael Stolhofer & Ong Keng Sen. In performative East-West Meetings, the imperial column hall turns into a dance floor and shows significant points of intersections between orient and occident with contemporary works of notable dance artists such as Jérôme Bel & Pichet Klunchun, Padmini Chettur & David Hernandez, or Clara Furey & Michikazu Matsune. Furthermore, the special project Occupy The Museum features an artistic dialogue between 14 choreographers and anthropological objects that stand in relation with the current exhibition “Danced Creation – Asia’s Mythical Past and Living Present“.

In summer 2013, 11 emerging European contemporary choreographers gather in Vienna within the [8:tension] Young Choreographers’ Series, and this comes along with great news: the reputed European dance prize Prix Jardin d’Europe will be awarded from this year onwards for the next five years within [8:tension] at ImPulsTanz. Among the candidates for the award worth € 10.000,- are Marta Navaridas (AT/ES) & Alexander Deutinger (AT), Michael Turinsky (AT), Willy Prager (DE/BG), Liz Santoro (FR/US), Rodrigo Sobarzo de Larraechea (NL/CL), Zeina Hanna (DE/LB) and many more.

Detailed information about ImPulsTanz 2013 online ticketing can be found at:
www.impulstanz.com!