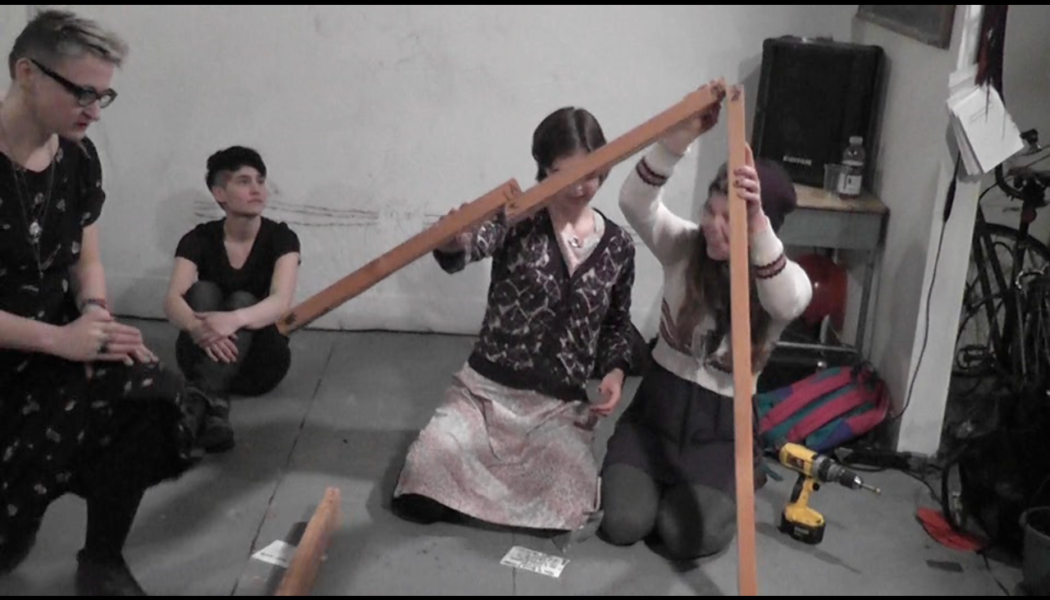 IT IS WEEK THREE OF THE SINGULAR, DURATIONAL, LIVE, COLLABORATIVE PERFORMANCE KNOWN AS:BROOKLYN INTERNATIONALPERFORMANCE ART FESTIVAL (BIPAF)
IN WHICH 200+ ARTISTS AND ORGANIZERS PERFORM A FESTIVAL OF PERFORMANCE ACROSS 11 SPACESEVERY DAY, JULY 4-28, 2013

6:30-8pm @ Glasshouse
Thinking of You (Tragedy Continues!): Episode 1 Rirkrit Tiravanija Untitled (Free/Still)
As a part of an open-ended tragicomic epic “A Tragic Bambi,” “Thinking of You: Tragedy Continues!” is a series of events that re-enacts canonical artworks with comical twists. It invites participants to contemplate the functioning of artistic production as the social/psychical construction that sustains transcendental aspiration. The event on June 16th whimsically transforms Rirkrit Tiravanija’s performance Untitled (Free/Still) into a collective tv dinner over educational/promotional videos and news reports regarding various modes of food distribution. The event will be documented by a camera crew and the artist, and the resulting footage will be incorporated into video work in progress, Joy of Man’s Desiring, which interweaves multiple social/psychic histories that condition and inform the present. Generous Artist: Kikuko Tanaka. Videographers: Geraldo Mercado+ Pai-Bai Bai
(image: Kikuko Tanaka, Joy of Man’s Desiring)

PERFORMANCY FORUM: Polidentity
How are artists categorized via identity? How does the poltiical operation of performance art relate with the artist’s identity and how are identifications made for political and institutional reasons? What effects do identifications have on the audiences experiencing the work and on the artists themselves? Jolie Pichardo, Anna Kalwajtys andKarolina Kubik, Jon Konkol, Hoesy Corona. Each artist performs, brief group talkback afterwards.(image: Karolina Kubik, MAGDALENE)

Wednesday the 17th:
4pm-7pm @ The Woods
“You Nakai” by drearysomebody
“Someone, let’s say, a baby, is born; his parents call him by a certain name. They talk about him to their friends. Other people meet him. Through various sorts of talk the name is spread from link to link as if by a chain. A speaker who is on the far end of this chain, who has heard about, say Richard Feynman, in the marketplace or elsewhere, may be referring to Richard Feynman even though he can’t remember from whom he first heard of Feynman or from whom he ever heard of Feynman. He knows that Feynman is a famous physicist. A certain passage of communication reaching ultimately to the man himself does reach the speaker. He then is referring to Feynman even though he can’t identify him uniquely. (…) a chain of communication going back to Feynman himself has been established, by virtue of his membership in a community which passed the name on from link to link, not by a ceremony that he makes in private in his study: ‘By ‘Feynman’ I shall mean the man who did such and such…’”

10pm-12am @ The Silent Barn
It Self-Destructs at Midnight
Experimental multimedia installations, performance art, sound art, musicians and thevisitor create this one-night-only Happening. The Cocoon Project collaborates with eight video artists from around the world and Brooklyn to loosely choreograph and perform the Cocoon with their projected videos. Performance artists create new

Thursday the 18th:
6pm-8pm @ Glasshouse
Body Art: A Long Table Discussion
Body-based performance art, or Body Art, often uses the performer’s own flesh as a site for dealing with agency, human rights, identity, and human being itself. As a current of performance art running throughout the Americas as developed by artists such as Artur Barrio, Ana Mendieta, Rocío Boliver/La Congelada de Uva, and Ron Athey (the latter two joining us for this Long Table) and many others, We ask, how do these relations—often threatening, testing, and fetishizing the body’s material flesh—also threaten power paradigms or enable other transformations? How do artists find their own lives transformed by their practices? What tales do their scars tell, and why? Join us for this special discussion in the format of a Long Table—a performance format conceived by Lois Weaver that experiments with participation and public engagement by reappropriating a dinner table atmosphere as a public forum, a

nd encouraging informal conversations on serious topics. This event is co-sponsored by the Brooklyn International Performance Art Festival and the Hemispheric Institute of Performance and Politics.hemisphericinstitute.org

8pm-11pm @ IV Soldiers
No Wave Performance Task Force: Feminist ReVolution #2
Chloë Bass, Ivy Castellanos, Christen Clifford, Lindsey Drury, Kaia Gilje, Valerie Kuehne, Esther Neff, and Courtney Leigh Novak. Curated/structured by Ivy Castellanos. The No Wave Performance Task Force (NWPTF) is a collective that enables performative social sculpture, practicing Feminist construction rather than reacting solely to existing conditions of patriarchy, gender, sexuality, and “Other” vs. “Us” dichotomies. We use the title NWPTF to frame our constructive and formal realizations of feminist ethics in performance. 50+ women artists have made work as part of the NWPTF, the collective is open and boundless, a concept rather than an organization. nowavetaskforce.org/ NO ADMITTANCE AFTER 8PM! PLEASE ARRIVE NO LATER THAN 7:50.
(image: Ivy Castellanos)

whose work explores the darker, yet healthy, parts of our psyches. “Ron Athey’s work explores challenging subjects like the relationships between desire, sexuality, and traumatic experience. Many of his works include aspects of S&M in order to confront preconceived ideas about the body in relation to masculinity and religious iconography” (wikipedia). “In this pasteurized society, I prefer to cause disgust, hatred, rejection, confusion, weariness, anxiety, hostility, fear … to further promote mental asepsis.” (Rocío Boliver) Ron Athey, Rocío Boliver, Peter Dobill. $20 donation. 21+ only! (image right: Ron Athey)

4pm-7pm @ Brooklyn Fireproof
TAB does Post-Dance: Genre is Fucked?
Stephanie Browne and Kay Ottinger produce a new installment of their series TAB, in which audience members are guided on a performative journey. Today’s show features artists who don’t identify with one genre, and is presented under the umbrella of the Brooklyn International Performance Art Festival.

Click Here for a Map of Participating BIPAF Sites