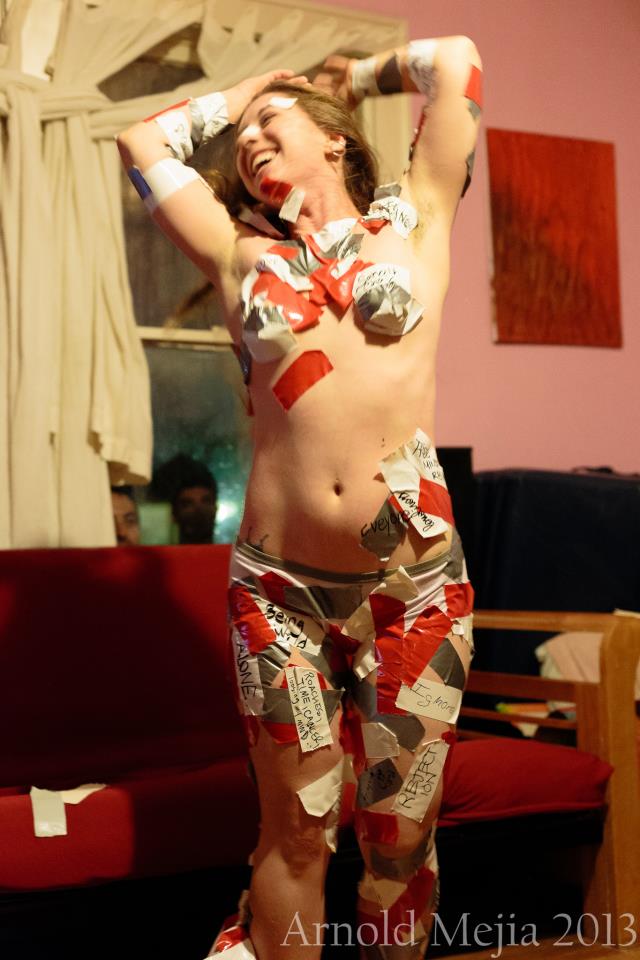 Sway Youngston, a recent addition to the Austin, Texas performance art scene, is a founding member of the Houston performance art group, Continuum and has been performing since 2009. She loves to perform nude when possible in an attempt to overcome fear of vulnerability and to desexualize the female form.

I was in a poetry course at The University of Houston with Julia Wallace. She mentioned Performance Art Lab, a class she was taking there. Some of the folks from that class were doing a performance they called Sexy Attack that sounded like a lot of fun, so I joined them for a few performances. After a while, Julia asked if I would like to create my own piece. So in 2009 at Notsuoh, I did my first original performance, “Not Mine” and fell in love with performance art. After Julia’s 2011 performance art workshop at The Jenner House, the artists who participated had a meeting and decided we loved working together. So we formed Continuum and have done group shows and BYOP’s (Bring Your Own Performances) since then, performing at amazing venues and random public spaces all over Houston.

What inspires you and your work?

All kinds of relationships. Human fears, especially my own. Audience reaction. Tests of the body. Cultural taboos. Self doubt.

Please describe one of your works/projects.

In “Spinning Piece” at Continuum’s Live Art Series (CLAS) at Avant Garden this year, I changed from my grown up clothes into my dress of whimsy and spun in circles while Macy Ulbricht played driving tones and rhythms on her electric guitar. When I could no longer spin, I would allow myself to fall to the floor. Then I would stand back up the best I could and do it again and again and again. After a while, I asked the audience to come in very closely in a circle around me and not let me fall. I spun again and any time I tried to fall, they would push me and hold me up. Finally I felt sick and screamed out for them to let me go. I fell. I reached up to pull an audience member down to me. I put his hands on my face to give myself a sense of physical stability. I asked him to take me out of the space, and he did.

How did the audience respond?

The first spin had the audience smiling as I laughed and spun like a child. After each fall, I believe the audience’s tension grew and some people were afraid for me. I am not sure, as I could not see straight. I had many friends in the audience, and I don’t think they expected the falls to be so hard and uncontrolled. I remember a woman with whiskey on her breath who was a part of the tight circle holding me up during my last spin. She would quietly say, “Go,” each time my face would pass hers. I felt like she wanted me to be sick.

To allow yourself the opportunity to be a clock maker in your performances whenever possible. To set everything up the best you can, construct an opportunity for something to happen, continue to interact with it on an individual level as the action takes place, but understand that there is so much out of your control after the start. In other words, to leave your expectations at the door when it’s finally time to perform. I enjoy myself the most when I perform this way and find more authenticity in these interactions. It is a difficult thing to relinquish control, and this is also a huge challenge I am constantly facing in this medium. I fucking love it.

Sway recently moved to Austin where she will be performing in August at shows organized by the new performance art group, Vice Life, and is on the lookout for new performance opportunities in the Austin area. In addition to her performance art addiction, Sway bicycles, swing dances, and in her profession, advocates for access to local and organic food.