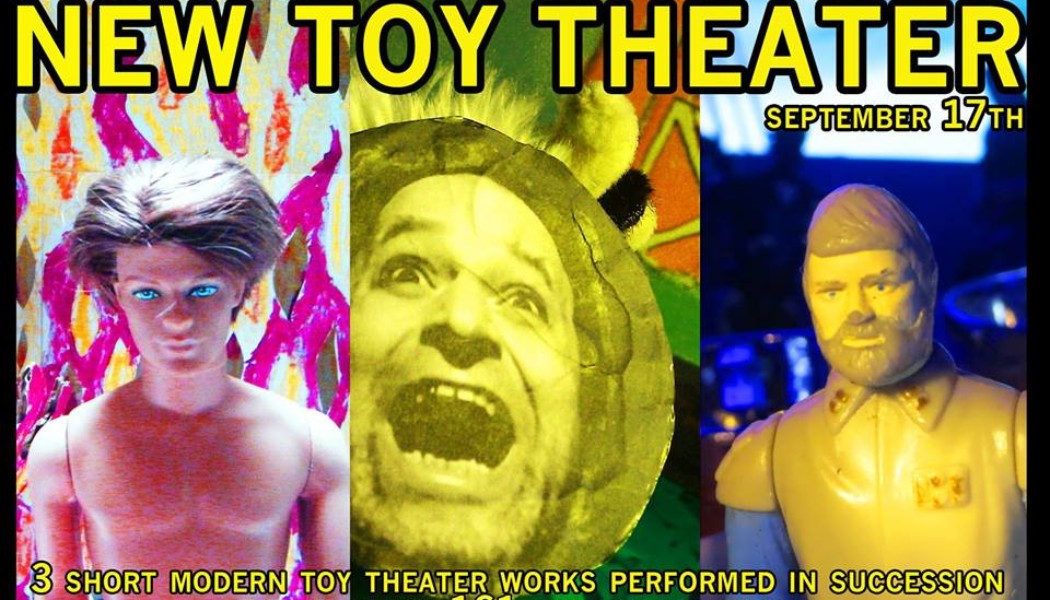 Amidst a cavalcade of cameras, sampled sound effects, voice modulators, action figures, and miniature worlds made out of cardboard, David Commander weaves three original stories of epic proportions. This is New Toy Theater, darkly humorous vignettes projected larger than life tell the stories of a plane crash, massive food waste, and the 1819 sinking of the whale ship Essex. Commander recontextualizes various toys of science fiction icons into profoundly dysfunctional characters while he wrestles with juggling multiple tasks at once, presenting a chaotic performance alongside the spectacle of the projected image he creates.

The first piece to be performed is named IN FLIGHT, which mocks the market of mis-focusing information and our potential for mass apathy. It questions what it is as a species that allows us to look the other way. Its story draws from the insatiable hunger for distraction that subtly guides our attention away from the immediacy of larger, life-threatening issues.

The story begins on an airplane that is crashing. We join the passengers of the doomed vessel as the crew saturates them with fast-paced, numbing entertainment and advertising in an attempt to distract them from their imminent doom. We watch the crew use commercials for Sky Mall products, and a talk show that is a demonic blend of ‘Oprah’ and ‘Ellen’ to cull the passengers into being distracted from their fate in flames that is only moments away. The passengers speed toward the ground while living vicariously through the celebrity’s glamour and engage each other about how the Sky Mall products affect their life.

Next, Commander moves to the miniature sets of Sacrament burger, which focuses on our disconnection from the function and value of food and how that detachment contributes to the waste of nearly half of all food produced globally. It also explores the inherent need to ritualize the act of eating and how this ceremony is performed within restaurant culture.

The story is centered on several characters in an upscale restaurant as they engage in an elaborate ceremony of eating. We visit one of the patrons who does not come to the restaurant to eat; he only comes for the service. We join him at his table as he uses the entire staff to indulge his dreams of suburban royalty. We also eavesdrop on a couple on a date, and watch as their eating disorders become a third wheel. All the while, we follow two farm animals, a cow and a pig, as they share their dreams and hopes on a journey from the farm to the plate and ultimately, the garbage.

Finally, Commander moves to the ambitious set of ESSEX, which draws a parallel between the destruction of the whaling-ship Essex by an enraged sperm whale, and the dangerous backlash of overtaxing the Earth’s resources. Our story begins in 1819 Nantucket, Massachusetts – the center of the whaling industry and supplier of most of the world’s whale oil. Captain Pollard is commissioned to take his crew deep into the Pacific Sea in search for oil by a Quaker ship owner. The Essex recklessly makes its way through the seas slaughtering whales, turtles, and setting fire to the Galapagos Islands. They are finally met with a giant whale that destroys the ship and forces it’s crew into their life rafts to starve under the burning sun.

ABOUT DAVID COMMANDER:
For the last 13 years David Commander has been a member of Big Art Group, a NYC theater company dedicated to building culturally transgressive new works through using the language of media and blended states of performance. He has also written, directed and performed in his own original plays, ‘PIGGY 1.5’ at the 2006 NYC International Fringe Festival and ‘Machine World Gospel’ at the 2007 Philadelphia Fringe Festival. More recently, he has developed and performed his own modern toy theater work at the 2011 Toy Theater after Dark Festival in Minneapolis, The 2012 TBA festival in Portland, Oregon, and 2013 Labapalooza Festival at St. Ann’s Warehouse in NYC, as well as other various venues in New York and Philadelphia. Later this year he will be taking his short toy theater vignette ‘In Flight’ to Helsinki, Finland as well as performing with Big Art Group in Warsaw, Poland.