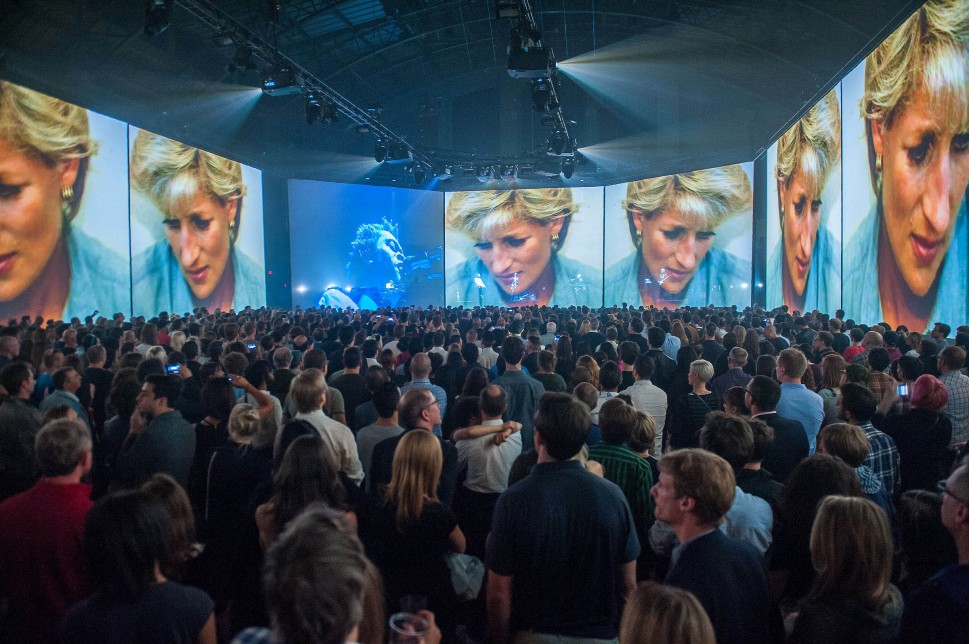 The multi-media spectacle of the fall thundered through the Park Avenue Armory’s military airs with all of the pomp and circumstance of the pope arriving, or rather some great dictator, rolling through taking his victory lap, the press outlets blindly congratulating, the masses gathering, huddled together to hear the booming voice of certainty wash over them and make them feel secure, informed, and more than anything, that their hands have become just a little more clean after having heard the master’s commencement address. NOW FIND YOUR OWN WAY HOME read the final banner on the 9 massive screens, all among confetti raining down upon us, lamenting the conclusion to a supposed hard journey that we should congratulate ourselves for having been a part of.

The piece took place through vignettes, anecdotal stories of persons representing, to Curtis, the global shift toward a culture of management rather than dreaming, of protection rather than representation. We were introduced to a Russian punk band, Donald Trump, the assassination of the Ceausescus, an entire 5 minute segment of a pop-art machine gun firing, an introverted mathematician bailing out Trump, all among myriad deconstructed stories summing up Curtis’s perceived history of the past 50 years. Massive Attack would play intermittently as in a music video, adding decor to Curtis’s berating voice. Identical videos would play on each one of the nine screens surrounding us for the majority of the time until the very end, when white confetti falls from the ceiling.

I felt betrayed. I had long looked up to Adam Curtis as a formative influence in the way I considered my socio-political surroundings. His documentaries tracing the history of our current late capitalist zeitgeist, notably The Century of The Self and All Watched Over by Machines of Loving Grace, presented the contemporary condition as one manipulated by the near-dictatorial forces of capital, marketing, and banking. And he took his time with his documentaries, exploring a situation in full, leaving the spectator longing for more, longing to situate his or her personal narrative within the world that Curtis so profoundly explored. Massive Attack V Adam Curtis did no such thing. The entire piece infuriatingly employed the same tactics that it had been warning and preaching against, in an act of petty self-hatred more than anything.

An illuminating quote by legendary conceptual artist Adrian Piper is as follows: (Taken from A Paradox of Conscience, first published in The New Art Examiner 16, no 8, April 1989)

“Therefore the distanced critical perspective from which we were supposedly invited to consider the values inherent in this work could not have been an aesthetic one. These values — racism, sexism, philistinism, cynicism, manipulation, contempt — are morally vicious values, and therefore the critically distanced perspective from which the artist purportedly examined them must have been a moral one. But a distanced moral perspective that criticizes morally vicious values merely by expressing them is no more of a genuinely distanced perspective than would be one that criticizes child abuse by committing it. So it appears that this work can be understood only as having affirmed and advocated unself-consciously the moral pollution it so blatantly expressed. Indeed it deliberately ridiculed such values and reaped considerable professional rewards for the artist for doing so.”

Here are the tipping points that engendered not only my feelings of betrayal, but a rising fury that I feel very rarely for pieces of art.

And all of the frustration culminates with the problematic of catharsis. That this show was obviously over as soon as the lights shut down. That the piece made it very clear that OK, you made it! Now go home and go about your business as if nothing changed in you, but know that you have filled your quota of politically engaged art for the season. Your hands are now marginally more clean”

We are in an age of living on highways. Seen through the eyes of Jacques Derrida, the highway can take us anywhere in the world, but only as long as we stay on it, it provides the false assumption that we may at one point get off to get somewhere else, as if it is entirely within our own control to decide where it leads, but the truth is that there are greater forces at play, the geographers, the urban planners, the hidden money-holders who often dictate where the highway goes, the easily-digested creators of culture who bring us onto the highway instead of leading us into new worlds.

It is with great regret that I write this piece. As a young critic, (23) I am much more likely to write something along the lines of Oh, this one did not so much resonate within me, or Oh, I feel that these elements were left unexplored. However, Massive Attack V Adam Curtis generated such a stirring anger within me that I found myself at ends with my words. I am alienated by an artist that I very much thought was my indirect mentor, or even master.

I have lost faith in you, Mr. Curtis. It must be time for a new generation to bring new visions and create possibilities for change, though I am afraid that you are not a part of it.