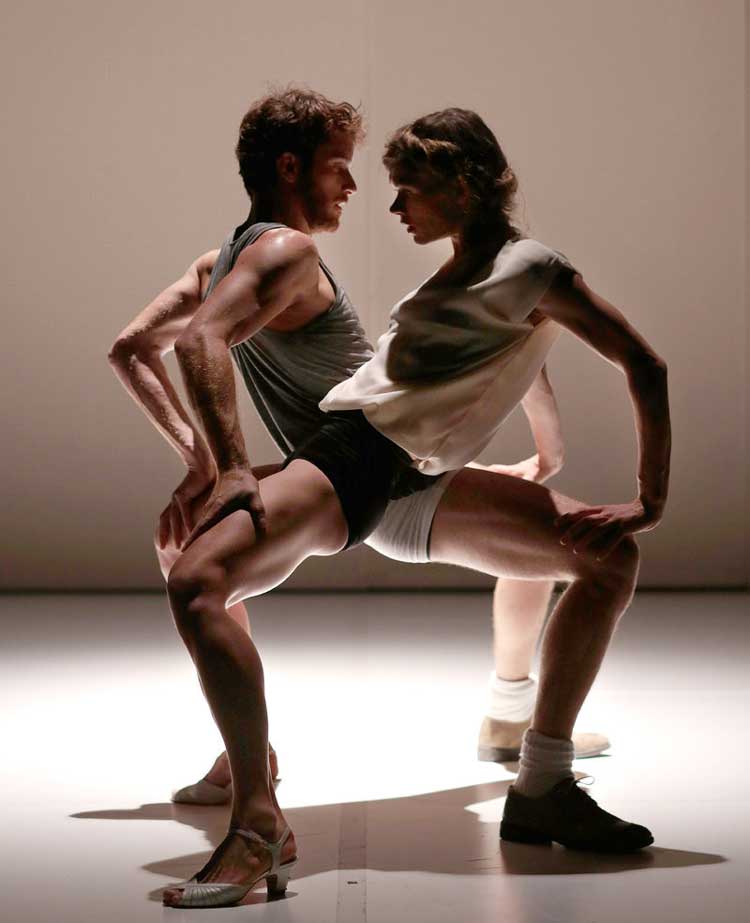 Full Festival and Listings at http://www.nextfestival.eu

March. The month of war. Winter is pining away and the violence of spring makes a grab for power. On a far planet there are people who live in an immense crater. Its walls are crumbling. Its dimensions are immeasurable. People look like microbes under the searching eye of a microscope. They live a tragedy full of hostility, which originated millions of years ago and has reached its full growth. From planet earth we are watching them. A vast space separates us. Time is swelling. If they could see us, we would seem nothing more than dinosaurs from a far and lost past. But then we see the resemblance. Who knows if they weren’t our ancestors… And suddenly March is back. An ambiguous, absolute and disorienting power is released. It carries the whole spectrum of human emotion.

For the first time, the Italian Dewey Dell (with a.o. the children of the great master of theatre Romeo Castellucci) works together with Kuro Tanino, director of the Japanese theatre company Niwagekidan Penino. They got to know each other at NEXT 2011. Together with the Japanese strip cartoonist, who has designed the costumes for this occasion, they create a performance on the boundaries of dance, theatre and strip cartoon.

The latest creation of Gisèle Vienne casts a doubt on the way in which we perceive and interpret the world. She places two silent persons – a dancer and a boy – in a nightmare that takes shape by pulsating light, sound and music. Together they try to escape the gruesome story that is written for them. Vienne transforms choreographic abstraction into a tableau vivant, which develops into a theatrical narrative, from story to reality. The Pyre plays a fascinating game that challenges our senses and our sense of interpretation. The American author Dennis Cooper wrote texts for the performance. The Cultural Press Bureau calls The Pyre “a tense, unsettling performance” and “an overwhelming piece that leaves the spectator dizzy. “ And the Theaterkrant writes “ The performance provokes the senses like a drug, as pleasant as disagreeable. The excess of form irritates and fascinates. If you surrender, you’re sucked in. It’s a trip, a superaesthetic , hallucinating bad trip with an ultramodern and ingenious light plan as a purgatory.” Balancing on the boundaries of theatre, dance, puppet show and visual arts, the French-Austrian theatre maker Gisèle Vienne confronts her audience again and again with the human fascination for the terrifying and the threatening.

In 4: STILL LIFE choreographer Nicole Beutler distils elements from the long history of partner dance. Onstage are a woman and a man. Their physicality and actions are guided by the principles of body geometry, and the geometry of space and light. All the elements of the piece are interdependent and composed musically in space and time; leading or following, merging or interfering, distant or intimate. 4: STILL LIFE is a court dance, a mating dance, a play, a ‘Lichtspiel’, a ritual. Beutler drew inspiration from the early twentieth-century Bauhaus movement for this ‘mechanical ballet’ dance duet. She worked in close collaboration with the dancers, and with light and space designer MINNA TIIKKAINEN and composer GARY SHEPHERD, both of whose artistic visions have had a strong influence on Nicole Beutler’s work for many years.

Bewilder. That’s what the choreographer Christian Rizzo wants to do. Dumbfound the audience, as he himself was in Istanbul almost ten years ago. He saw a folkloristic show there. The dancers were stamping their feet on the ground. So simple and yet so intense. The choreographer was overwhelmed by a primal emotion. Anno 2013 he makes a performance based on true facts. Here too : eight men. They stamp, they spin. Most folk dances are simple, repetitive and are performed in a group. They share the same motives and impulses. What happens if you detach that common core from the geographical or cultural context in which it is so typically embedded ? And if you let what is left pulsate between the beats of two drums ? What if these drums build up a rhythm that is a mixture of tribal music, psychedelic rock and dub ? Wow… Surely ? With d’après une histoire vraie Christian Rizzo wants to create an earthly dance that erodes the ground and at the same time takes you to higher spheres. A dance that radically removes labels such as ‘traditional’ or ‘contemporary’.

Rizzo (Cannes, 1965) took a training in the visual arts, subsequently became a fashion designer, a rock musician and eventually a dancer and choreographer. In 1996 he founded L’Association Fragile. The awareness that nothing lasts but that it is always followed by something new is the main idea of his work.