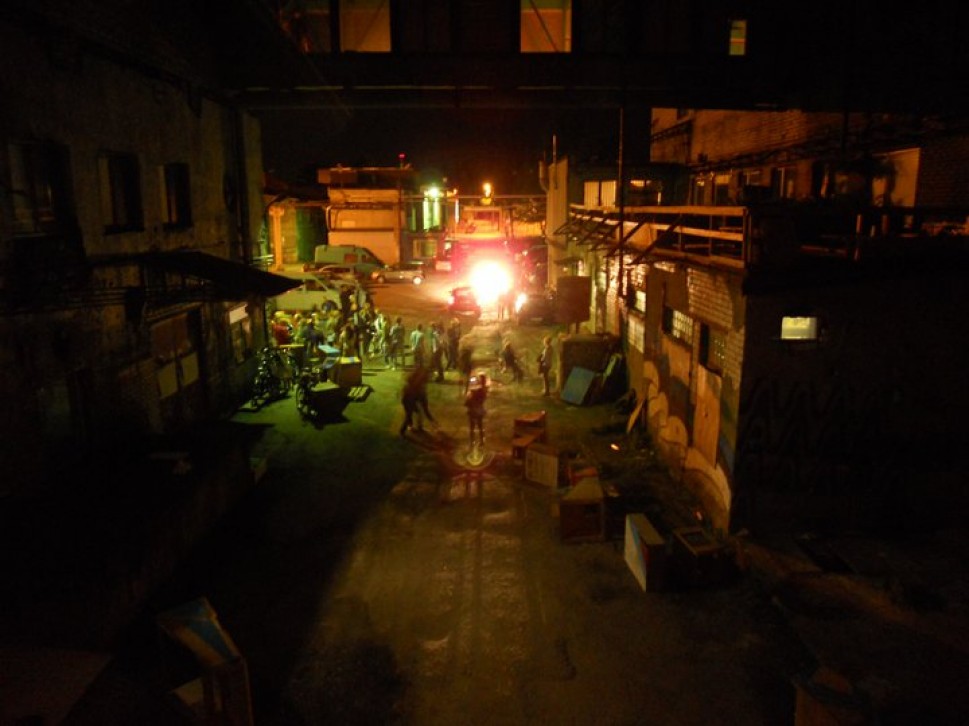 “The term “polymer” derives from the ancient Greek word πολύς (polus, meaning “many, much”) and μέρος (meros, meaning “parts”), and refers to a molecule whose structure is composed of multiple repeating units, from which originates a characteristic of high relative molecular mass and attendant properties.” Wikipedia.

According to the weather report, it’s -20C (-4F) tonight in Tallinn, the Estonian capital with a population of 400,000. Over 50 artists are being evicted from their self-managed cultural center Culture Factory Polymer.

I began to learn about Polymer three years ago when I organized a festival that took place simultaneously in Tallinn and Paris, France.

A 3,000 m2 (32,000 sq ft) former toy factory from the Soviet era, Polymer is a three-story, massive building that has housed an artist community for over ten years.

This is one of the most interesting spaces I’ve ever visited and one of the richest where I’ve organized an event, imprinting a mix of art with siderurgy, darkness and enlightenment, joy and pain, but overall an ubiquitous, overwhelming, yet unpretentious blast of creativity.

On December 31st, 2013, Polymer received a letter from the real estate company BREM stating that the building had to be empty by January 2nd, 2014.

As I write this text, artists are borrowing vans to move out with their artwork and personal belongings. Some have lived in the space for a few months, others for over ten years. Some are art students or artists starting their careers and others are well known artists in Estonia and abroad. Artists living in the space include performance artist Raoul Kurvitz and sound/performance artist Erik Alalooga, former Chair of the Arts Department at the Estonian Academy of Arts.

Run by the artist collective Art Container, Polymer has been one of the most prominent centers for the production and dissemination of alternative art and culture in Estonia. With two concert halls, two art galleries, a traditional letterpress print shop, and several other spaces for rehearsals and workshops, Polymer has hosted uncountable events that squeezed out and gave back creativity at its best. Their artist residency program has brought much needed insights from international residents to a country that, even if it is one of my favorites, realistically, does not attract many visitors due to its location, size and weather.

Artists have contributed innumerable, self-imposed, laborious and enjoyable hours, weeks, months and years of work, Summers and Winters. They’ve kept the old factory inhabitable, renovating and maintaining the space. They’ve searched and found, and lost, then recreated a way to communicate an alternate view of the human experience through art. They’ve failed to implement a self-managing system; they’ve succeeded and they’ve failed again. Regardless, they’ve succeeded in the end because they’ve tried out alternate self-managing models to produce and disseminate alternative art content in a global system with little tolerance for difference, even less so when it comes to independent models of organizing, managing and governing.

The city of Tallinn and Estonia as a whole have gained much from the work carried out at that former factory. Polymer artists have more or less openly worked on recreating an Estonian identity, as it was felt necessary in regards to the recent past. As most national economies,

Estonia has profited from this rich concoction of identity-boiling factory in the midst of worldwide sterile banking conditions–it’s a known fact that a strong national identity connected to the arts and culture highly contributes to a country’s economic output.

If any of the above resonates with your own experiences or if you believe in the value of art and what artistic work contributes to society, please sign the petition below to ask the Estonian government to 1) acknowledge the value of Culture Factory Polymer and 2) mediate between private and national interests.