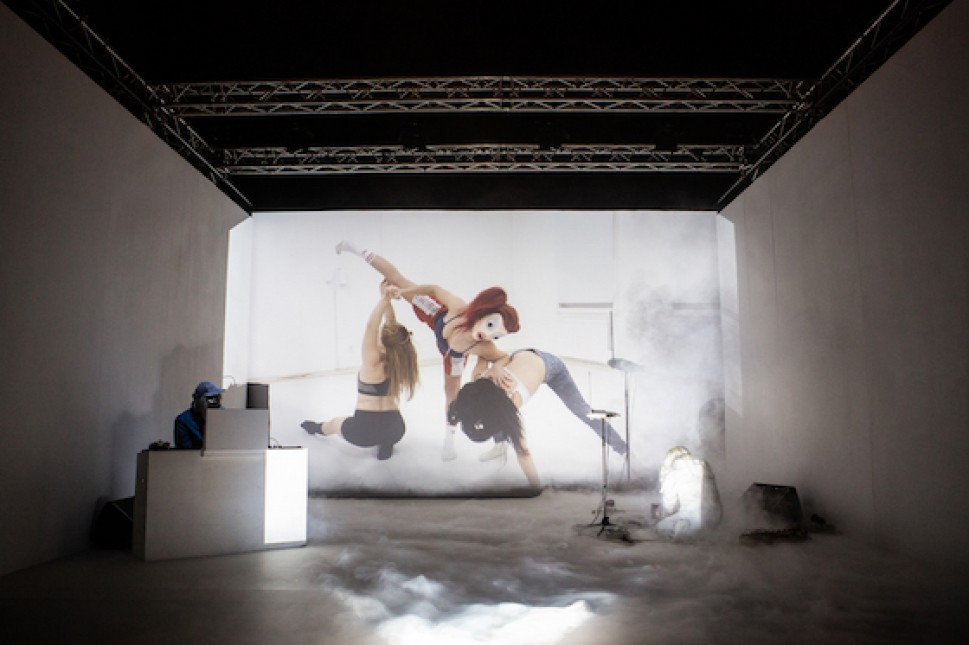 3 Episodes of Life: Episode 1 is a reperformance of the violence and brutality present in so many rehearsal rooms stretched to their most grotesque culminating in an hour long sexual assault that is built on the exploitation of explicit and implicit power dynamics to put a young dancer in humiliating circumstances.

In the foyer of the theater there are giant spray painted signs “Fuck the floor” “this is what art looks like” “breath in, breath out you’ve got this”. Later these phrases are repeated in the performance.

Before the performance two figures in exaggerated paper mache masks play a work for theremin and piano. We are then ushered into the theater space where the two performers sit on stage in a white box with a thin white curtain in front of them. When it is opened a silent movie is projected onto the back if the white box and the musicians, whose masks resemble the choreographer and the dancer play the score live.

The film is about the audition of a young dancer who is groped, gets naked, is told to “fuck the floor”, and engages in suggestive sexual activities with the other dancers in the room. Playing to shock and ick sensibilities Öhrn has the naked dancers smear each other in menstrual blood, shit, and semen in a section of the video. He knows that he is being provocative, and seeks to exert some control over the audience as well. He makes leaving the theater a major event– each time that someone walks out the sound cue says see you later. Still, at least 20 people do leave.

The question that remains is what was it like in the room when this was made? Was Markus Ohrn being careful with his dancers as he asked them to re-enact these scenes of violence? Is it possible for a male artist to make work that depicts such great violence on female bodies in a way that does not exploit them?

Lyam B. Gabel
Lyam B. Gabel (they/he) is a trans* performance-maker, scholar, and community archivist who creates containers for collective remembering and radical celebration. They are a founder of trans-media oral history and performance collective LAST CALL, and a director of the NEFA NTP ‘18/ MAP ‘16 performance Alleged Lesbian Activities about the history of lesbian bars. Their current work the dance floor, the hospital room, and the kitchen table exploring queer care from the early years of the HIV/AIDS crisis through COVID-19 received a NPN Creation Fund commission with the New Orleans Contemporary Arts Center and Chatham University. Other current work includes an AR journey through trans* euphoria and queer ecology and a short film about lip-sync as time travel. He regularly collaborates on and midwifes work by playwrights and solo performers and has developed work at Judson Church, Pipeline, Ashland New Plays Festival, The Theater Offensive, and The New Orleans CAC among others. Lyam is currently an Assistant Professor of theater at Lehigh University. Current Drama League Next Stage Resident, Drama League Fellow 2017, Distillery Artist New Orleans CAC 2016.