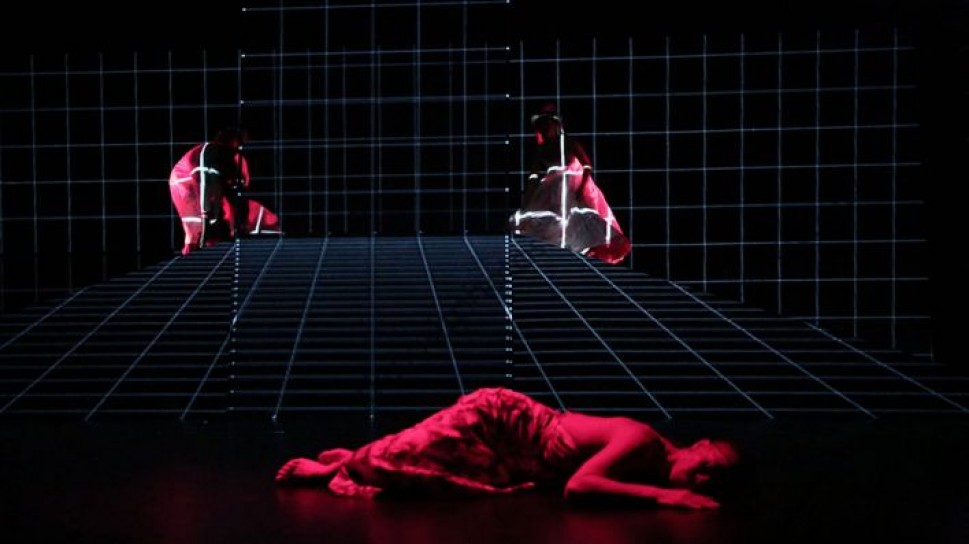 Sudden Rise
Moved by the Motion (Wu Tsang & boychild)
The Present is Not Enough, HAU1
June 28-29

On the curtain of HAU’s proscenium theatre flashes a western archive. Images from a Euro-centric art historical past and present. In the first 30 seconds, we travel over a thousand years in time and find ourselves back in Germany, where Wu Tsang enters the stage to the melodic sounds of Patrick Belago playing the cello. The performance text, which was co-written by and with Fred Moten is spoken with a soft authority. The words are dense but seductive. The type of language that makes you reposition your body to hear more clearly. Visually, Sudden Rise fractures perspectives and casts the theatre into the mirage of shadows. Dark materiality is collaged through time on stage, and the result creates a landscape – not of mountains and cities – but of violence, traumas, and resistance.

Leonardo Hidalgo’s video projections are cast onto a minimal set of ramps and platforms. Wu Tsang, Tosh Basco, and Josh Johnson traverse the stage in a quotidian fashion, but their bodies doubled though projection, transform the stage into a kaleidoscope of action where the real and the ghost image are one and the same. In a particularly striking moment, the performers take turns violently leaping from the tallest platform in a gesture that evokes desperation and collective solidarity. During these moments, video projections of the performers seen from an areal perspective play as the virtual bodies spin ad nauseam.

The concept of “mantic” phenomenology is referenced halfway through the performance. Wu Tsang barrows the terminology from Oskar Becker. In contrast with a phenomenology that is linked to individual lived existence, “mantic” phenomenology concerns itself with the eternal and structural symmetries of the unconscious. Sudden Rise embodies these symmetries and demonstrates the body’s capacity to hold the residues of past, present, and future.

During the curtain call, Wu Tsang walks onstage with one breast exposed. The gesture, which could be lost on a mainly German audience, imprints onto my American (white) conscious. I am forced to confront a living portrait of the recently emancipated slave. Sudden Rise is a performance full of similar transtemporal gestures and offers a culturally imperative lesson in a critical chrono-literacy.

Jamison Edgar
Jamison is a visual artist making work at the intersections of the queer archive, painting, and performance.