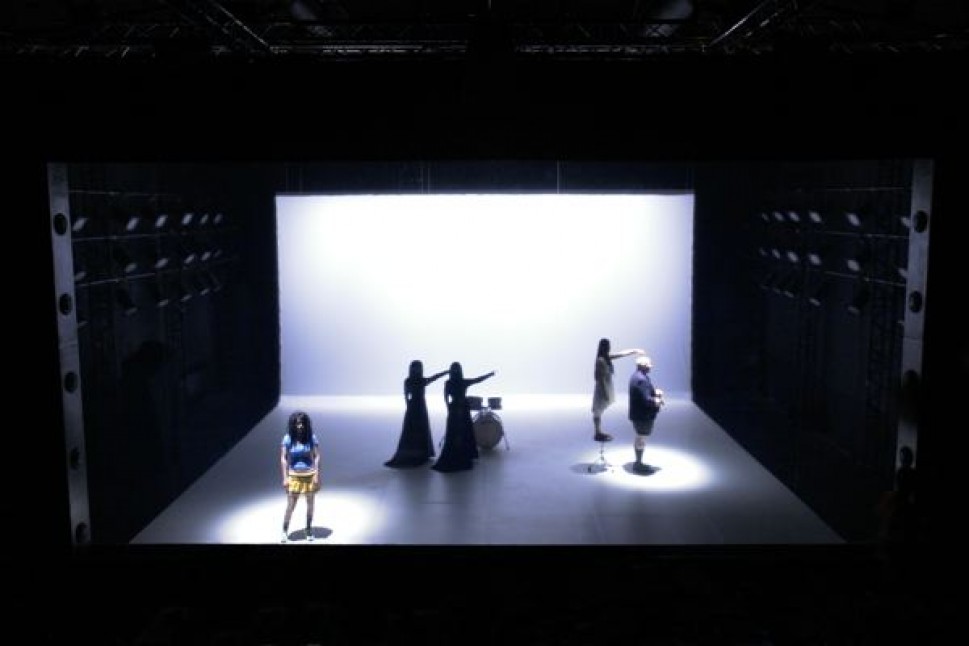 Born from Italian parents in Lausanne on October 8th, 1965, Massimo Furlan, after having followed training at the Beaux-Arts School of Lausanne (1984-1988), initiates an operating cycle centred on the themes of the memory and the forgetting. He exposes regularly since 1987. He’s interested in scenic representation and collaborates with several dance and theatre companies. In 2003 he establishes Numero 23 Prod, pointing out performance and installation. Thence will arise projects such as “Furlan/ Numero 23”, “International Airport”, “(Love story) Superman”, “Palo Alto”, “Numéro 10” and “Les filles et les garcons”.

The main thread of Massimo Furlan’s projects is biography. A simple and banal story, the story of a kid born from Italian parents in Switzerland, the story of a teenager like any other. There is no will to speak about himself for himself, as of something unusual. The evoked memories are those of all, at least those of a generation, born in the middle of the Sixties. His work is focused on the memory. The projects arise from memory images: the picture of a singer that hang in his sister’s room (“Je rêve/je tombe” and “Live me/Love me”); moments during which, as a child, he played football on his own in his bedroom while listening to the radio broadcasting matches (“Furlan/ Numero 23”); or when, before going to sleep, he wandered around in his pyjamas with a scarf around his neck imagining himself to be a Super hero (“(Love story) Superman”); or when, as a teenager, he fell in love with a girl and didn’t know what to say to her (“Gran Canyon Solitude”, “Les filles et les garcons”). Each work has its roots in an anecdote, a true story, made of simple elements. From the anecdote one goes to the narration, to the construction of the fiction.

Never bothered by the question of limits between styles, his performances consist of « long images ». They are almost motionless images. With very simple actions (a gesture, a movement, a glance) which remain a long time in front of the spectators, forcing them to enter, to become active, and to make some sense out of it: to build their own story.

In the course of his work, Massimo Furlan questions the act of representing: he revisits icons, tackles the question of failure and the distance between the model and the living, producing in this way a burlesque and poetic effect. Around his projects, he brings together performers with different backgrounds, from top professional players to closest friends.

Construction of the images

Each project starts with a cycle of visions: dreamlike, phantasmagorical, enigmatic images. Those images show up higgledy-piggledy; some are related to intimate memories, and other are stuck to the present, redounding on contemporary history. Little by little bonds of sense and formal bonds appear between those images; overlapping images create a third one. Then comes a more concrete phase related to dramaturgy: the sense-identification process and the highlighting of that sense. A subjacent narration is built. The project is then presented to the collaborators. The third phase is the meeting of the whole team on stage or in the space to be invested. The construction in itself starts (light, sound, interpretation, costume, video, etc.). At this moment the images gain their own duration, their rhythm, their balance.

The choice of the places

Each project proposes a reflection about the place and establishes a dedicated space. The place depends on the story, the anecdote and the thence generated vision.

For project “Furlan/Numero 23”, the place was a stadium: « When I was a kid, I dreamt of being a major football star and winning the championship or, even better, the world cup. I dreamt about all this, alone in my room, listening to the matches live on the radio. With a little ball, I mimicked all the actions described by the commentator ». To speak about that, the wish sprang up to use a true stadium, with a true commentator, and true broadcasting, and of course, a true match in its entirety. The spectators were invited in a stadium to see a match with only one player.

For the project “(Love story) Superman”, it was a theatre stage: the images and sounds had to come out of the dark, the characters had to be isolated, lost in darkness. Theatre techniques allow all that.

To talk about the memory of the parents taking the kids to the airport on Sunday afternoons to watch airplanes take off (“International Airport”), the best thing to do was taking the spectators to the airport in order to experiment these emotions: the beauty of the place, the melancholy of remaining there and going home afterwards. In a certain way, being in the place facilitates the mental journey. It is an additional level of narration.

The duration of the image

The concept of time is fundamental in scenic work. The duration of the images quickly became an essential point: most of the works have in common to be « long image(s) ». Long images are based on the paradoxical fact that an image in itself doesn’t have an established duration. It does not have a limit of time. Nowadays, we are used to look at many images and get quite fast bored with them, and so we wish to see other, being at this level influenced by television, publicity, and cinema. There is wish for rapidity. However, time is necessary for an image to be understood and interpreted. The images shown in the exhibition are simple images, due to the absence of speech or spectacular visual variations. They are almost motionless images. With very simple actions (a gesture, a movement, a glance) which remain a long time in front of the spectators, forcing them to enter, to become active, and to make some sense out of it: to build their own story.

“Furlan/Numero 23” is in itself one single image. It lasts 90 minutes, the duration of an entire football match. The project reproduces a match everyone knows – Italy/Germany, the 1982 World Cup Final -, but played by only one protagonist: Furlan. It’s a single image because the story is already known by everyone. It’s like a form one can immediately contemplate in its entirety. Then one starts looking at it better, « visiting » it, going round it. Time is necessary to do all that.

For the work “Girls Change Places”, the spectators take a train, by night. The train takes them to small stations where they see figures, characters, in expectance, tired, lost. The work finds its origin in the view of the 1973 Eurovision Song Contest in which Patrick Juvet took part. The train trip is built around ten stops, ten stations, ten forms, ten images. Ten moments of several minutes during which the public watches situations with characters that are motionless, or almost. The superposition of these ten enigmatic images gives one long image. The superposition is possible because the ten situations are proposed with enough time. The long image, the total experiment of duration, allows the spectator to start his own story.

The place of the spectator

In some cases, the spectator must be active to make the performance exists (“Live me/Love me” or “Me & Myself” for example) and in other he just needs to sit down and watch. In some other, he gets there by chance (“Superman Cosmic Green” or “Old Station Heroes”). It all depends on the object itself, on the themes used. To have the spectator sing, take the bus, the train or simply to make him/her sit down on an armchair in a theatre depends mainly on the anecdote and the best manner of transforming it into a story. The stadium seems to be the most logical place to speak about the dream to be a major champion. The airport is an obvious place to talk about the idea of flight, of departure.

By confining the spectator in specific positions which reawaken memories in him/her, some kind of multiplication effect happens, the sharing of a common memory, of something collective and personal at the same time.

The images built leave much place for the spectator, for his imaginary. In “Furlan/Numero 23”, the public of contemporary art and theatre, considered as being very reserved, began to play the role of supporter with much commitment and warmth during 90 minutes. The public of the performance had learned the role of football public. Anyone has in mind or experienced something connecting him/her to childhood and to the football world. Undoubtedly the vision of this solitary attempt to rewrite history, in such a pathetic and comic way, and at the same time so spectacular and simple, allows each one to find a way for him/herself, in relation with his/her own personal story. In a certain manner it is the same reaction the spectators have when they attend “(Love story) Superman” : the question of the fancy dress and childhood in relation with the question of time and ageing. All are concerned.