In Performance: Gisèle Vienne – This is how you will disappear 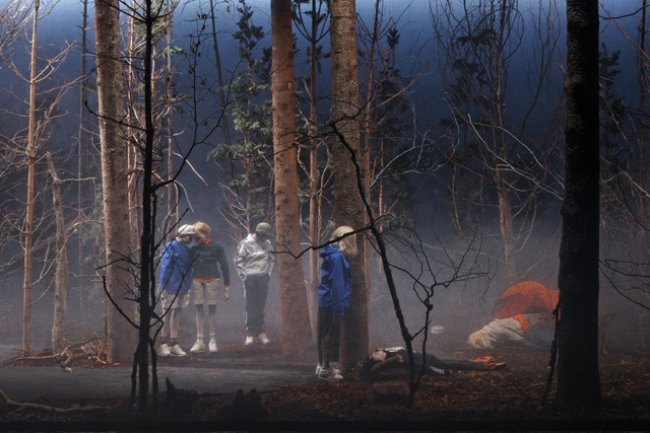 Gisèle Vienne – This is how you will disappear:

Everything starts in a forest. Extremely natural, inhabited by a buzzard in feathers and bones, this wooded landscape is staged like the reflection of the interior experiences of the characters who cross it. Depending on the light, mist and sound atmosphere, the metamorphosis capacity of the place is astonishing, following the example of the feelings driving the spectators, which go from harmony to danger, from the experience of beauty to anxiety in front of nature. It is through the spectacle of the forest that each individual dialogues with his private impressions, sometimes the most secret, like an entry into oneself, both individual and collective. But the forest is alive, full of tales, images, fantasies, forest myths as familiar as they are disturbing. Three figures soon spring up, including two archetypal beauties of today, post-adolescent idols: the young athlete, the perfection of appearances, and the rock star, the suicidal aura of ruin. Between the two of them: the trainer, the value of authority, of the taming of the body, suddenly confronted by primitive impulses and chaos. Every thing here is contained in contradiction, in the disturbing virtue of opposites and works on this tension that the show makes the spectators feel emotionally, physically and aesthe?tically. Changing visions of nature, passing in a breath, in a ray of light or a trace of smoke, from well-being to fear. Situations varying from one extreme to the other, from serenity to the most brutal murder. As an expert in perturbation, Gisèle Vienne composes images of a world in constant motion, from the imperceptible evolution to the most destructive chaos. It is over the forest that we see this, in the wood that we hear everything. Rarely has tree foliage been so revelatory as in this nature-driven theatre. ADB

After studying philosophy, Gisèle Vienne went to the École supérieure nationale des Arts de la Marionnette in Charleville-Mézières. She had two decisive encounters there: Étienne Bideau-Rey, with whom she co-signed, in the framework of the D.A.C.M. group, her first shows (Splendid’s by Jean Genet in 2000,ShowRoomDummies in 2001, Stereotypy in 2003 andTranenVeinzen in 2004), and the actor Jonathan Capdevielle who has been in all her shows ever since. Starting in 2004, she signed her stagings and choreographies alone. Disturbing plastic and stage objects, playing with fantasy as well as reality, deepening their furrow in our most shameful contradictions. Impulses of life, death and sex cross, in a very personal ritual, the universe of this artist who cleverly joins bodies, images, music and words. For a disconcerting but saving experience that, through the artistic transfiguration process, updates a certain truth of self and our civilisation. Gisèle Vienne presented I Apologize and A Beautiful Blonde Little Girl in 2005 andJerk in 2008 at the Festival d’Avignon.An American poet, writer and art critic, published in France at P.O.L. (God Jr., Wrong, The Sluts), Dennis Cooper is the author of texts that play on the muddling between fiction and reality and somewhat destabilise the reader. Faced with the difference between what is possible in a fantasy life and what is possible in a clearly real life, he found himself questioning his own perturbation. An approach that meets the one that Gisèle Vienne proposes to the spectator. Their collaboration has already given rise to the shows I Apologize, A Beautiful Blonde Little Girl, Kindertotenlieder and Jerk. An American composer, guitarist and record producer, Stephen O’Malley has come out with over 50 albums and given hundreds of concerts around the world. He is a sound worker who constantly experiments, coming from metal, influenced by jazz, electronic music and various types of experimental music. He does not hesitate to go far, as much towards minimalism as towards sound explosion, but always with enormous sensitivity. This is how you will disappear is his third work with Gisèle Vienne, after Kindertotenlieder, created with Peter Rehberg, and Eternal Idol.Composer and co-director of the Austrian label Editions Mego, which revolutionised, in the 1990s, electronic music composed by computer, Peter Rehberg is an old hand at collaborations of all kinds. A friend of other sound buffs (notably Christian Fennesz, Kevin Drumm, Jim O’Rourke, Mika Vainio and Stephen O’Malley with whom he founded the group KTL), he also works for artists officiating in the world of dance like Meg Stuart and Chris Haring. For the last decade, he has been working regularly with Gisèle Vienne with whom he co-signed music for six shows, including the first, ShowRoomDummies.

Gisèle Vienne talks about “This is how you will disappear”. (in French)