By Caden Manson (Editor In Chief)on May 12, 2011
Comments Closed 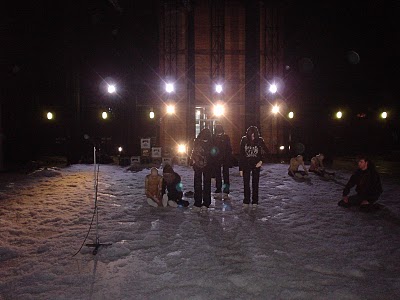 “Poetry leads to the same space as all forms of eroticism, to the blending and fusion of separate objects. It leads us to eternity, it leads us to death, and through death to continuity…“ Georges Bataille “Eroticism“

Welcome to the nightmare factory of French theatre maker, performance and doll artist Gisèle Vienne! In “Kindertotenlieder”, a hyper-aestheticised performance-installation of a winter landscape, constructed from fantasies, obsessions and fears, she takes us on a journey into an emotional maze blurring the boundaries between reality and fiction.

The plot alone defies standardised ideas on morality and sexuality: A group of teenagers get together for a death ritual in the form of a black metal concert. One of them is watching his own funeral; the other, his friend, is his murderer. Based on this plot, a trip with an indefinite outcome starts to unravel, subsequently showing the murder, in the form of a loop, from three different perspectives: from the perspective of the victim, the murderer and, ultimately, from the perspective of society.

Gisèle Vienne’s installation toys with the black romanticism of an Alpine winter landscape. The perfect breeding ground for the birth of the uncanny in our imagination, of the eerie blend of something that is equally familiar and strange. Apart from the levels of past and future, all other parameters also begin to falter: The characters of the teenagers are constantly replaced by different performers, thus also changing their sexes. The game of deception even goes so far that they are during some parts played by dolls and robots: The choreography of movements is based on the constant change of a character from performer to performer, but also from human beings to still or moving artificial bodies. Artificial bodies pretend to be natural ones, while performing humans lead us to believe that they are actually machines. Life and death have ultimately become questions of perspective and definition in the teenagers’ dream world which, highly sexualised and emotionalised, is characterised by suicidal fantasies and a longing for death. In the further course of the excessive loss of a possible boundary between fiction and reality, the teenage funeral ritual turns into a death metal gig. The live soundtrack of Peter Rehberg and Stephen O’Malley (Kindertotenlieder is the beginning of the creation their band KTL) also acts in this world of images and symbols of pagan, Alpine Perchten culture and its contemporary equivalent in a strange, artificial “black” teenage subculture. The two masters of noise will create a hypnotic maelstrom that comes across like an enchanted, post-rock-like version of black metal.

As with many other of Gisèle Vienne’s performances, the literary backdrop for this queer teenage sex’n’crime story comes from American author Dennis Cooper, about whom William S. Burroughs once said: “Dennis Cooper, God help him, is a born writer.” In 1986 he started writing his five-part novel, “George Miles Cycle”, which the texts for “Kindertotenlieder” were taken from. The cycle is based on an autobiographical, fateful encounter of the then 15-year-old author with his classmate’s younger brother who was called George Miles. While Cooper was enjoying an excessive phase of life and work in Amsterdam, he was shaken by the news of the death of his mentally severely troubled friend. This tragedy prompted the author to start working on the novel series he had already conceived in his teenage years. The result was a novel in five parts, which in its radical queerness, its equally inscrutable and dramatic stories and its powerful visual language can be located somewhere in the artistic regions of Georges Bataille, William S. Burroughs, Derek Jarman or Bruce LaBruce.

The literary backdrop of “Kindertotenlieder” alone suggests that it has absolutely nothing to do with Friedrich Rückert’s same-named cycle of poems which Gustav Mahler set music to, but rather with a cathartic theatre ritual in the style of Georges Batailles. A ritual as an object of projection for collective as well as individual fantasies and obsessions, defying the moral ideas of our rational behaviour and unfolding its cathartic effect as a territory for obscene fantasies and inscrutable fears.

Producer: DACM With the collaboration of the Quartz – Scène nationale de Brest

(text from the Donau Festival)

In Performance: Dana Michel, Mercurial George (Out There Festival)