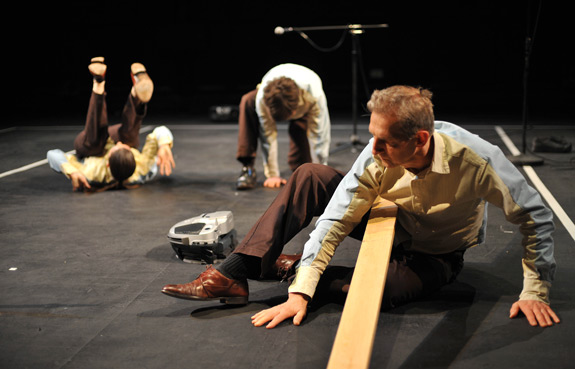 Members contribute to the conception, research, writing, choreography, documentation, and educational demands of the work. Characteristically we attempt to establish a spatial relationship with audiences, other than the usual proscenium theater situation, which may suggest a concept, such as sporting arena or parade ground, or may create a setting for which there is no everyday comparison. We perform a personal vocabulary of movement, both dance-like and pedestrian, that often makes extreme physical demands on the performers, and attention demands on the audience. We incorporate historical and contemporary issues through text and movement. We create visual/spatial images to encapsulate thematic concerns. We place our performances in non-theatrical sites when possible. We research and write collaborative lectures for public events, and often subsequently publish these, either in our own artists’ books, or in professional journals.

Goat Island was founded in 1987 and incorporated in 1989 as a non-profit organization to produce collaborative performance works developed by its members for local, national, and international audiences. Eight completed works include Soldier, Child, Tortured Man (1987); We Got A Date (1989); Can’t Take Johnny to the Funeral (1991); It’s Shifting, Hank (1993); How Dear to Me the Hour When Daylight Dies (1996); The Sea & Poison (1998); It’s an Earthquake in My Heart (2001); and When will the September roses bloom? Last night was only a comedy (2004). The company has toured the US and England, Scotland, Wales, Belgium, Switzerland, Croatia, Germany, and Canada.

When will the September roses bloom? Last night was only a comedy

It’s an Earthquake in My Heart

How Dear To Me the Hour When Daylight Dies

Can’t Take Johnny to the Funeral

We Got A Date

[amazonify]0415365155[/amazonify] Small Acts of Repair: Performance, Ecology and Goat Island, is the first book to document and critique the company’s performances, processes, politics, aesthetics, and philosophies. It reflects on the company’s work through the critical lens of ecology – an emerging and urgent concern in performance studies and elsewhere.

This collage text combines and juxtaposes writing by company members and arts commentators, to look in detail at Goat Island’s distinctive collaborative processes and the reception of their work in performance. The book includes a section of practical workshop exercises and thoughts on teaching drawn from the company’s extensive experience, providing an invaluable classroom resource.

By documenting the creative processes of this extraordinary company, this book will make an important contribution to the critical debates surrounding contemporary performance practices. In so doing, it pays compelling tribute to committed art-making, creativity, collaboration, and the nature of the possible.

The Last Performance is a web-based writing, archiving, and text-visualization project created by Judd Morrissey to evolve alongside the creation and performance of The Lastmaker. The work is being collectively authored by Goat Island, invited artists and critics, the Goat Island community-at-large, and you.