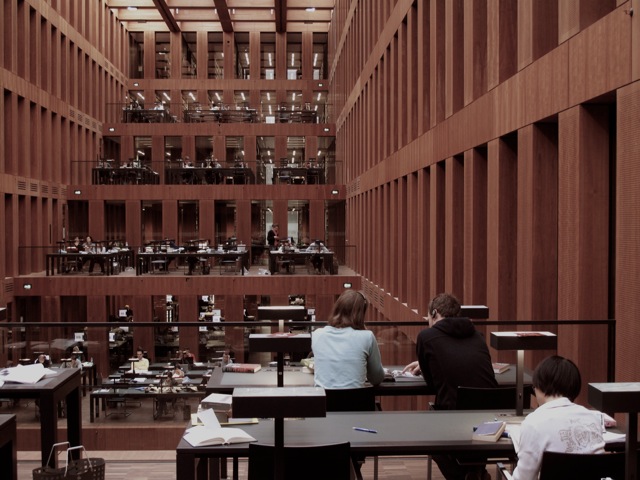 The Quiet Volume is a whispered, self-generated and ‘automatic’ performance for two at a time (in line with Hampton’s other Autoteatro work), exploiting the particular tension common to any library worldwide; a combination of silence and concentration within which different peoples’ experiences of reading unfold.

Two audience members / participants sit side-by-side. Taking cues from words both written and whispered they find themselves burrowing an unlikely path through a pile of books. The piece exposes the strange magic at the heart of the reading experience, allowing aspects of it we think of as deeply internal to lean out into the surrounding space, and to leak from one reader’s sphere into another’s.

“This now of the page is what grips me – the present moment, this one, summoned here with this arrangement of marks/code, ink/pixels, letters and words.” – Tim Etchells

The Quiet Volume, a collaboration with Tim Etchells, has opened here in Berlin in English and German at the incredible new library pictured below. The piece is commissioned and produced by and for Ciudades Paralelas (Parallel Cities), a festival of portable AND site-specific work curated by Stefan Kaegi and Lola Arias running until Sep 24 in Berlin before moving to Buenos Aires in November and to Zurich in May 2011. TQV will also be presented by co-commissioners Voorhuit in Ghent, Belgium, as part of The Game is Up! – Ant Hampton on Contemporary Performance Network

Performance maker, writer and director, Ant Hampton (1975) founded Rotozaza in 1998, a project which has explored the use of instructions given to unrehearsed ‘guest’ performers, both on stage and, more recently, within more intimate structures sustained and played-out by the audience themselves (Autoteatro). More recent solo projects and collaborations include an ongoing exploration of ‘live portraiture’ with Greg McLaren as The Other People (La Otra Gente): structured encounters with people from non-theatrical milieu. He was head dramaturg for ‘Projected Scenarios’ at Manifesta7 European Biennial for Contemporary Art, Sud Tirol, Italy. He has contributed to projects by Jerome Bel and Forced Entertainment. He collaborated with Tim Etchells for the 2009 ‘fantasy-protest’ programme of live-art for the ICA, ‘True Riches’ and again more recently on ‘The Quiet Volume’, a new autoteatro work for two readers in a library, commissioned by Stefan Kaegi and Lola Arias for Ciudades Paralelas (Berlin / Buenos Aires / Zurich).