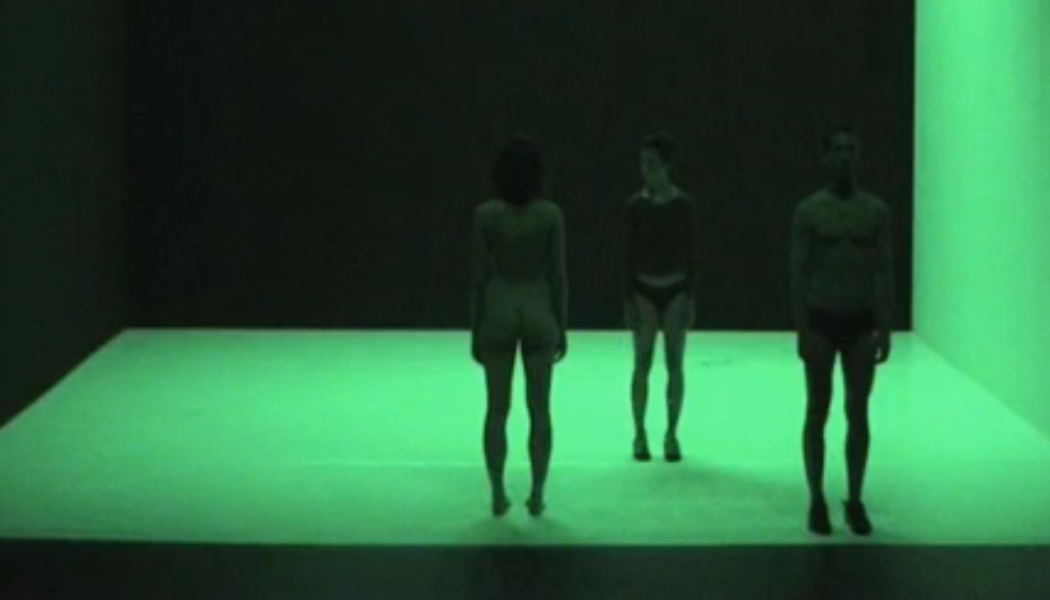 The presentation of BASCULE marks the second New York City engagement of French choreographer David Wampach. Originally performed in France, 2005, BASCULE is re-mounted this fall with a new cast of American dancers: Michelle Boulé, Liz Santoro, and Bryan Campbell. The French word BASCULE means “scale” or “see-saw”, an apt title for a work whose staging dramatizes the back and forth flows between states of equilibrium and disequilibrium. The sound design, costumes, and set work together to intensify perpetually changing perspectives, while the three dancers–one male and two females– move in varying relationships to the score, visually creating a hypnotic and mesmerizing rhythmic interchange.

David Wampach (Choreographer) first studied medicine in Montpellier (96-97), then theatre in Aix-en-Provence (98) and at the conservatory in Marseille. His dance training began at the Compagnie Coline in Istres (99), at the Centre Chorégraphique National of Montpellier (00), and finally at P.A.R.T.S. in Brussels (01). He studied dance history and theory with Laurence Louppe (04-05-06) and has worked with Thierry Baë, Christian Bourigault, Mathilde Monnier, Julie Brochen, Odile Duboc, João Fiadeiro, Alain Michard, Catherine Contour and Christian Rizzo. He began choreographing his own work under the production company name Association Achlès with the piece “lambda if I include myself, kappa the piece itself” in Brussels (01), then with “D ES R A” a duo created with Pierre Mourles (03), “circonscrit”(04), a laureate of the Solo Mio competition and laureate of the Biennale Festival of young creators from Europe and the Mediterranean, BASCULE (05), QUATORZE (07), AUTO (08), BATTERIE (08), and BATTEMENT (09). In 2010, he participated as choreographer in the production of « L’éveil de Printemps » directed by Guillaume Vincent, with the author Jérôme Game at the festival ActOral, in Marseilles. He is at present working on CASSETTE, his version of the ballet « The Nutcracker ». David Wampach is a laureate of Villa Kujoyama in Kyoto, Japan (2011).