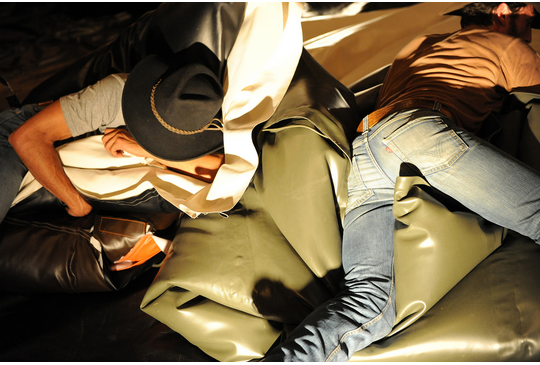 The poor state of the world we are living in today and the lack of ecological courage in his homeland encouraged the American choreographer Andros Zins-Browne to create The Host. Featuring the cowboy, an outstanding American symbol of the individual that manipulates, controls and uses his environment. The question is however, how long this freebooter can hold his ground while the land around him seems to be turning against him.

An overdose of testosteron on boots, flavoured with slapstick turn The Host into a pleasant tragedy about how we are doing our best to turn this planet into an postapocalyptic environment. The artist Stefan Demming inhabits the stage arena with huge inflatable objects.

• Andros Zins-Browne was born in New York. He came to Brussels to study at PARTS. In 2008 he presented Second Life, his first full-length performance, at the Kaaistudios. Andros Zins-Browne performed in the work of Jonathan Burrows and Mette Ingvartsen (2009). For The Host he travelled to the US to live on various ranches and study the life, culture and movement of cowboys.