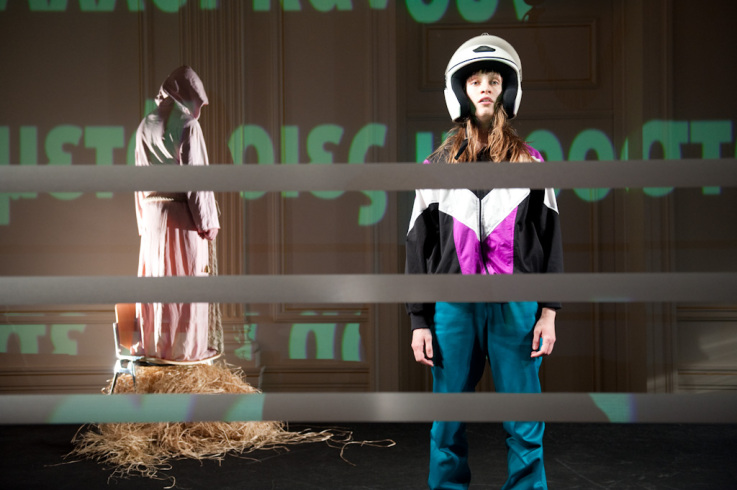 Bio
He was born in 1979. He is currently a participant of DasArts-Master of Theatre, in Amsterdam, The Netherlands. He is co-founder of the theatre collective “Nova Melancholía”, based in Athens, Greece. He is a performance maker, performer and writer.

1. Can you tell us a little about your work, your history and your performative concerns.
I am a performance maker, a performer and a writer. I come from Greece, but I am currently based in Amsterdam, where I am a DasArts participant (Master of Theatre, Amsterdam School of the Arts). My work is gradually moving towards researching the function of choreography and of dance in a performance, both physically and conceptually.

I have co-founded an Athens based collective, Nova Melancholia, which is a group that follows methods of physical and devised theatre and also methods of visual arts performance. My work with Nova Melancholia has been so far mainly site-specific and it tends to conceptualise the performer’s body as a living and moving sculpture on stage. Furthermore, the group prefers to stage non-theatrical texts, creating spectacles that combine both contemporary dramaturgy and unconventional playwriting.

I have also co-founded the Athens based Institute for Live Arts Research, which is an initiative about bridging the gap between the theoretic discourse on the contemporary performing arts and the performance making and all contemporary artistic practices.

2. What are you working on now?
I am just beginning a research on the topic of Power, taking Luis XIV as my reference point. It is all too early to have a concrete idea about the project, but already there are some interesting questions for me that arise (and I know they won’t be the only ones): How a body materialises power? How a body materialises the loss of power? Which are the two extremes? How can a body be “extremely” powerful? How can a body be “extremely” in loss of power? Is it always a game of poses? Is it a game of gestures? How a body moves in both cases? How it dances? Does it scream? Does it sing? Does it shit? Is it beautiful? And in what way?

And last but not least, how is it possible to materialise “transformation” on stage?

3. What are your biggest performative obstacles for yourself in this new work?
Well, that’s easy: it’s myself! It think I will be the one performing, so, needless to say, I feel extremely challenged by that. I am entering a long period of contemplation and of doing and I have no clue where it will lead me.

4. What was the last piece that you saw that you would recommend to the Network and why?
Recently, I saw “Ricky and Ronny and Hundred Stars: A sado-country opera”, by MaisonDahlBonnema & Needcompany. It was a very weird experience. Visually there were not many things going on; 3 performers on stage, singing all the text and moving/dancing as little as possible. In the centre of the stage, hanging from all 4 sides by ropes in the form of an X, there was a tableau where all the text was projected: in a very peculiar way it seems that this projection was the star of the performance. You could sense that you were watching a somehow political performance. The words were telling us a story of urban cannibalism, of the modern boredom of our western civilisation that leads a very “comme il faut” couple –for no particular reason- into SM games of power after the arrival of an extra-terrestrial being, the Hundred Stars.

Anyway, very weird experience but I think it’s worth it! I personally believe that since I cannot better describe it than as weird, that means that there is something that seems totally strange. This is a great opportunity to learn something out of it. I believe there lays a challenge.