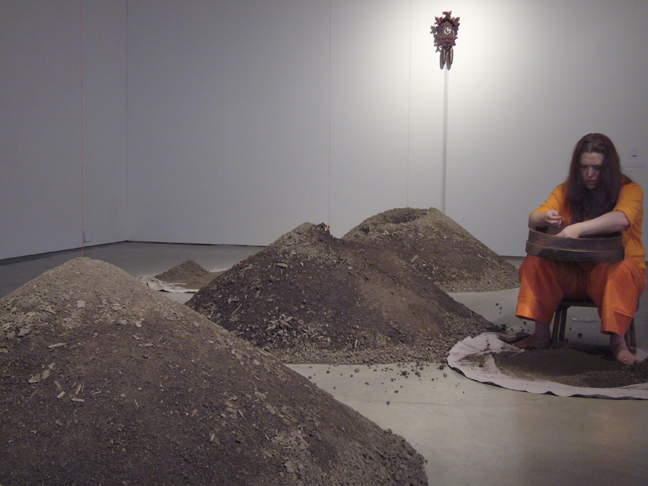 Laurel Jay Carpenter is a performance and installation artist, investigating longing, devotion and alchemy in her durational live works. She has exhibited extensively in New York City at venues including Exit Art/The First World, The Knitting Factory, Performance Space 122, Judson Church House, the ISE, and SOHO20 Galleries, and Brooklyn’s Borough Hall. Laurel has been a fellow and invited artist at the International Performance Art Festival in Cleveland, The Performance Studies International Conference and the MacDowell Colony.

Internationally, Laurel has presented work at the NMAC Foundation in southern Spain; with Wooloo Productions and the Hebbel Theatre in Berlin, Germany; and as part of the 2007 Venice Biennale. Laurel is honored to have been one of only two US participants in the Independent Performance Group (2004-2007), founded and facilitated by Marina Abramović, after studying briefly with her. Currently, Laurel is a Professor of Art at Alfred University in western New York.

1. Can you tell us a little about your work, your history and your performative concerns.
My performance education began as a viewer. My first two jobs out of University were as Publicist at Mobius, in Boston, and then as the PR Director at Performance Space 122 in New York City. This was 1990; I was not yet fully artist-identified, but I knew that this artwork, this community was something that I needed to get as close to as possible. These were great jobs because I had to engage each artist directly about her/his process and concerns and inspirations–usually while their work was still in its infancy–and distill that into a cohesive summary for the press release. Then I got to see the work performed many times over its run. I saw a lot of work, and became an active witness to the whole process of developing a performance work, compositionally, conceptually and critically.

I had student experience in theatre productions, but was always more visually inclined, so in the spirit of the “anything’s possible” lingering-1980s-club-performance scene, I began creating installations for friends’ performances, then making independently exhibited installation work. By the mid-1990s, I had added performers to the installations and was performing myself. At that time, my work was an odd fit in NYC. As opposed to the performances of my mentors and peers in the downtown dance and performance scene, my work followed a visual art lineage. I was making performed installations: non-linear, silent, usually durational, sometimes interactive and best viewed in passing, in gallery settings or other site-specific locations. My work over those nearly 10 years was dense and layered, perhaps even cluttered, with found objects and symbolism. I was interested in feminism and paganism and ritual and alchemy and transformation, and I crammed it all in there!

In 2002 I left New York to attend graduate school, and my work profoundly changed. I had a huge studio and wide open space all around me. I deconstructed my process and finally learned to edit. What remained was my interest in routine/repetitive gestures, duration and spatial composition. The work got stripped down to its singular essence. Without all the trappings of my earlier work–quite literally with fewer and increasingly abstracted objects–these recent performances are more able to hover and coax out the delicate, fleeting suggestions of awareness and devotion. I am exploring the impossible in-between places when time is suspended and the tipping point extended, the moment right before collapse, dangling, almost falling, almost overflowing. I conjure a quieter, subtler kind of alchemy by imprinting the space, moment by moment, hour after hour, with simple, ceaseless effort: sifting, licking, kissing, laughing. In my work, in every way, I seek the mundane magic of being richly and intensely present.

In 2002 I also met Marina Abramović, who invited me to attend one of her “Cleaning the House” workshops in southern Spain, (with fellow guest participants Franko B and Tania Bruguera, and a slew of her students from Braunschweig, many now accomplished performance artists). This experience galvanized my interests and intensions. I was honored to be included in Marina’s Independent Performance Group, which supported the work of this “next generation” of durational performers. Though short-lived, IPG was influential in creating a dynamic community of international artists approaching their work with similar formal concerns, and allowed us to bring group exhibitions of durational visual art performance to significant venues not accustomed to showing performance in this way. I seem now to be at the beginning of another 10-year cycle, so I am eager to see where my work takes me next!

I just received tenure for my teaching position at Alfred University, so the last few years have been particularly focused on that major career hoop. I was consistently making new work, sometimes just more slowly than I would have liked. This post-tenure perspective is offering a space to re-evaluate.

Over the past year I have been collaborating with Nowegian video/performance artist Terese Longva. As interdisciplinary artists, we share interests in site, time and the body as both material and tool. We are researching areas of convergence in the daily life of memories, fears, desires, dreams, identity, and how these might be in opposition to social expectations. Though we met at Alfred University, Terese returned home to Norway, so we have been collaborating via blog and video conferencing to develop new works that investigate personal longings, feminist ideology and political urgency. We have two resolved works: Thirst is a vigorous 8-hour site-responsive performance investigating water as both a mythic metaphor and a politically charged resource. Hunger is our carry-and-go piece, simple in scale, and turned inward. With only a single sentence to offer the other, the performers in Hunger explore the myriad relationships between two people: lovers, parent/child, teacher/student, friends, colleagues, clerk/client, and consider the ways we cannot communicate, but long to connect.

Terese and I have been applying to international performance festivals to show these new works, and hope to present a version of the works-in-progress in New York over the summer.

3. What are your biggest performative obstacles for yourself in this new work?
Working in collaboration is both a challenge and a blessing. When every detail of your just-developed discovery and conceptual process must be communicated, it leaves little room for extended shadows. How can we hold on to what’s unknown, what’s deliciously unspeakable in a creative process when the only way to move forward is to explain it? I think Terese and I are learning how to move not only forward but also laterally and diagonally. We are learning that the truth is not always straight ahead. Collaboration also creates an accountability and clarity seldom found alone. In our case, working on live art when we are remotely located is daunting. We are forced to speak our bodies and emotions through this virtual experience. It all feels very up-to-the-minute in terms of cultural phenomena, as if the Present is grapping me by the scruff and dragging me into itself. I also know that if it weren’t for these technologies, Terese and I would not be able to collaborate at all. However, I am looking forward to her visiting next month, so we can communicate about our work in other ways: through gesture and glances and silence and sighs.

4. What was the last piece that you saw that you would recommend to the Network and why?
I am still reflecting on the significance of Abramović’s overwhelming retrospective at MoMA. I attended The Artist is Present in the final week; I wanted to see the strain and near-release of the end of the performance. I waited in line for 9 hours and never even got close to sitting with her. I turned my participation into a personal ritual of witnessing, never sitting or leaning, never taking a break for food or drink, never a break for the bathroom. I was simply there, aware and watching, in the space, with myself, with her, with everyone. I found the experience exhilarating. So much about that piece has been written about, blogged about, and hashed out by the many viewers, curators, reviewers, cultural theorists and reperformers; they said it all, much better than I can here. I still devour anything anyone writes about the exhibition. It’s becoming almost like this generation’s Woodstock: I was there, I was a part of this significant something.

I had a similar experience last year at Tom Murrin’s The Talking Show: The Magical Ridiculous Journey of Alien Comic. This is Tom’s oral memoir, replete with old school slides and trash props, and sensational guest stars (including Mimi Goese and Salley May) in fabulous costumes. The show is all vulnerability and generosity of spirit mixed in with hilarious stories from Tom’s personal life in the burgeoning Avant Garde Theatre scene from LA to Paris and back to New York. Tom reincarnates the art world I wished I had been a part of, and the world I feel lucky to know through my (still vital!) artist ancestors.