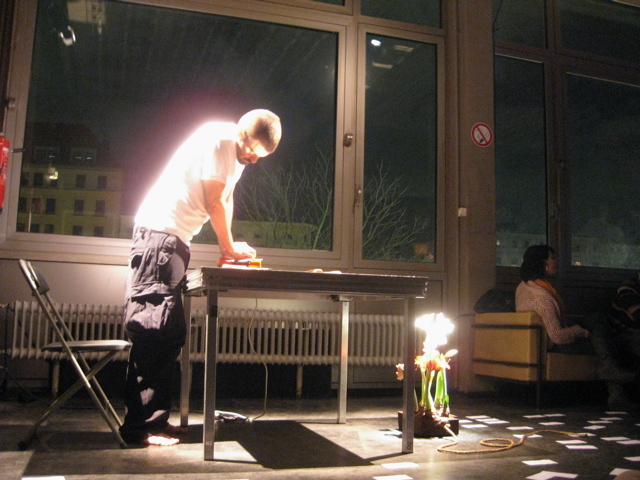 As an ’emerging’ artist and being, he combines video, performance and alternate settings and practices of experience and image production (including edibles, the auditory and olfactory perception). He is interested in the coming into being, absence and decay of self, other and the in-between through experience, imagery, its failure and – again – decay. currently finishing his m.a. in performance studies on phenomena of transgression/de-limitation, his work shifts between theory and practice. expressing his self pretty much sums it all up. Assistances with joan jonas, julie tolentino, ron athey, the lappetites and others; performed with julie tolentino and others.

1. Can you tell us a little about your work, your history and your performative concerns.
After engaging in theatre and acting for a while, I went to Berlin, simply because I wanted to, and, feeling alienated from theatre, started studying performance and film studies. Being at unease with the director-actor breakup and retelling stories told a thousand times, creating fictitious worlds while the real one is already giving me enough material (with its fictitious status!), I was searching for practices and ways that both think and do and are – whatever it is they are and do (do they think?) – in a more fluid form, where a separation is no longer in power. I was never really interested in what anybody thought anybody else was trying to tell them or me, or to understand what allegedly was there to be understood, closed concepts and ideas bore me, quite easily. I was more focused on the way we create every form of narration in ourselves and on the way in and out, whether there is the slightest impetus of narration to be found in a piece or not. When people in my environment, even fellow students, were asking each other to »please explain«, I was asking myself »what does it do to you?« and »why?«. Often, the more painful question, I would say, and the more difficult one to try and respond to.

Performance and video art, with no further specification, more or less worked their way into my world, and were happily welcomed. Creating settings for experiences using whatever one wants to use, as vague as this may sound, is what interests me, while I don’t see any difference between experiences I have with or within art and those I have anywhere else. Risking ourselves, letting go of ourselves and the expectations we might have (we always do) in order to be open to an experience that might shake us to our bones and do something to us, as opposed to staying at a distance, observing and judging, protecting ourselves from being drawn into someone else’s world, that – if we go all the way – turns out to be not so foreign or other as we thought it was. I don’t know what »understanding« is, but I believe whatever we mean when we use that word, it’s a phenomenon that includes our entire body as a resonating one, one that is at stake with us, precarious, thus rendering every solely lingual reflection or encounter incomplete. I am trying to escape language, as well as images in a very wide sense and myself, to see where I might land.

Workshops and assistances with Julie Tolentino, Joan Jonas, Marina Abramovic and others highly touched, influenced and inspired me to follow the path I was already on.

2. What are you working on now?
My next project is once more video and installation-based, but will eventually be juxtaposed/confronted with me doing things, or maybe just being there (where to draw the line?), a relatively big installation of parallel streams of video and sound and a being, ever re-arranged, opening dialogs that one can immerse itself in at any given time, exit as they wish as well as be told a story if they want to, or just get lost in a multi-sensory envelope to feel safe and secure in – or terrified, it’s all up to you. I look at this kind of installation as an experiment of un-directed perception, to see how it makes decisions for us. It will be a piece using my personal experience with the practices of communication we have today. I am curious about the way communication functions when speaking and listening become separated, confronted with or replaced by mute communication that has freed itself from or has fled language, suffering from an ever underestimated status, not legitimizing itself through a manifestation in words, that we tend to trust in much more than anything else, misled by the supposed safety language grants us. well, it doesn’t. speechlessnes – what is that? do i contribute to the silencing of my interlocutor by speaking more as he loses his words and arrives at an incapability to »speak«, to »voice« himself, to create himself before me – yet doing so, unwillingly?

3. What are your biggest performative obstacles for yourself in this new work?
My obstacles are numerous, and on a to-do-list, being shot alive as I go along. For this piece, I have to ask myself how much of my so-called »private« life I am willing to reveal, and how much of it is necessary, or a hinderance. I look at ideas that think artists as separate from their work in incredulous astonishment. I cannot separate myself from my work, completely. »Me«, whoever that is, is the spatial and temporal origin that my work emerges from, in constant fluctuation between the inside and the outside of this »me«, negotiating it in relation to being touched by others, that are and become finally me, as I become them. Convictions of experiences supposedly having nothing to do with who we are challenge me. How do we translate emotions? What are they? Should they stay private? Are they allowed in public? Some tell us they were merely 90 seconds of a chemical reaction that we can dominate, steer, have command of. I am not so sure about that. I experience a massive lack of communication, a failure in the face of the concepts we have of that »thing« – communication, that is in desperate need of being widened, to include our most basic capability of communicating – feeling each other. It can be devastating as well as highly mystical, it is just not very popular, and frowned upon.

4. What was the last piece that you saw that you would recommend to the Network and why?
I would have to go back to a piece that has moved and touched me in an exquisite way, small metal objects by The Back to Back Theatre from Geelong, Australia. They were invited to the Philadelphia Live Arts Festival/Philly Fringe in 2009, where I saw their production. Set in the uni district of Philadelphia, the audience was seated on a bleachers-like construction on a meadow between streets, where college sports groups were exercising around us. Across from us: a street lined with shops, parked cars and passers-by. Wearing headphones, we sat as we started »overhearing« a conversation of two people that were not yet visible. Attaching those voices to bodies we identified as the couple talking, we were taken on a journey that went up and down that small street, a little story unfolding that would have been almost ludicrous, had it tried to be serious. With a subtle humor degrading the story in its central role, what happened is easy: i encountered a couple of people that faded into the background of pedestrians and became distinguishable again, more than auditorily connected to me via their microport and my headphones, standing in a street like any other street, lost, passed by by strangers that had no idea who they were passing by, but I did. The emergence of very intimate communicative/affective connections despite a spatial separation made this piece outstanding in my very subjective experience. I could add that The Back to Back Theatre works with disabled, excluded people, but I don’t see any reason to stress that.