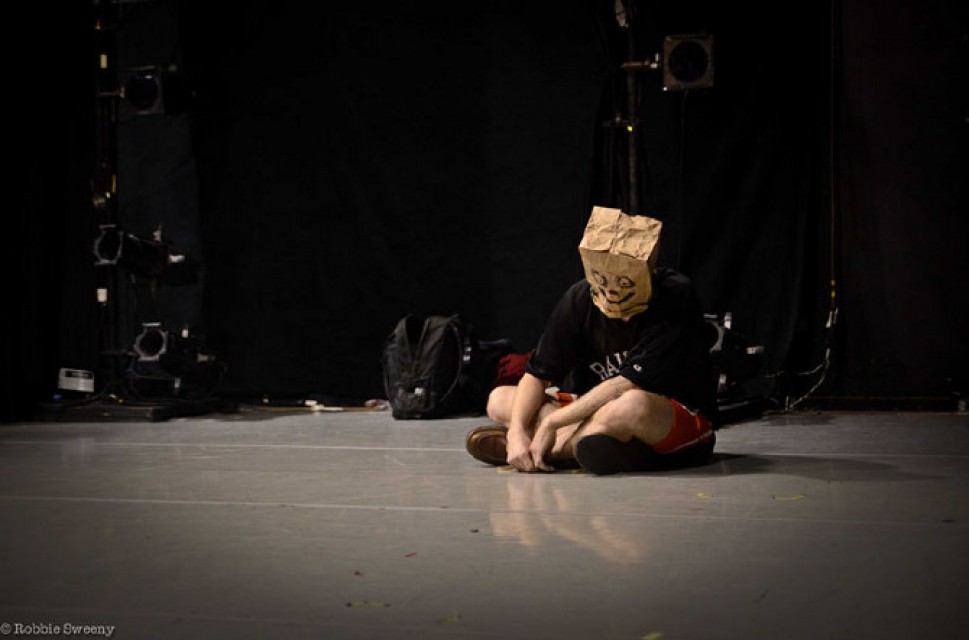 Strong Behavior is a collaborative performance-making project, led by Jesse Hewit. We are interested in the sociological body as a wild and disastrous site of façade, determination, and grace. Our pieces are movement-based studies that attempt to identify and interact with the increasingly mechanistic nature of human states of being, and we work to create a provocative relationship with our audience that yields curiosity, visceral reflexivity, and a faint but steady tenderness.

Jesse Hewit is a San Francisco and Brooklyn based artist and performer. He holds a BFA from NYU/Tisch/Experimental Theater Wing, under the training of Steve Wangh, Mary Overlie, and Raina Fernandez-Von Waldenburg. His work is also heavily influenced by his graduate studies in sociology, and he holds an MA in Human Sexuality Studies from SFSU, where he worked primarily under the mentorship of Rita Melendez and Amy Sueyoshi. Since his move west, Jesse has had the rich privilege of collaborating with Christine Germain, Jorge De Hoyos, Miguel Gutierrez, Jess Curtis/Gravity, Catherine Galasso, the Erika Chong Shuch Performance Project, Monique Jenkinson/Fauxnique, and Sara Kraft/Kraftywork. His original work has been curated and produced in the Bay Area by Keith Hennessy, Julie Phelps, Dwayne Calizo, Shannon Preto, Laura Arrington, The Garage, CounterPULSE and The Lab, and he has been granted residencies by Mama Calizo’s Voice Factory (Summer 2009 Resident Artist), and CounterPULSE (Summer 2010 Artist Residency Commissioning Program). As a curator, he produces and facilitates for Dancer’s Group/CounterPULSE’s 2nd Sundays monthly choreographer’s salon, and has curated various events around town from small nights at the Box Factory, to working groups for contemporary choreographers, to headliners for the National Queer Arts Festival.

NOISE: a microbiopolitics of masculinity
The culminating experience of my graduate studies, NOISE…is a devised group piece that fused short choreographic vignettes from my 5 research participants into an evening length piece. Each section reflected a different respondent’s potent relationship to the racialization and posturing of contemporary masculinities in public space.
June, 2007 – CounterPULSE

WallBall
WallBall (redux)
The Pretenders
These three duets were constructed by myself and Jorge Rodolfo De Hoyos and each one explored a different layer of physical codependency within a relationship. Their content vacillates between pedestrian tasks and full-bodied hysteria, showing the myriad of dynamics present when you need someone to need you more than they do.
May, 2008 – July, 2009 – CounterPULSE, The Garage, The Lab

freedom of information 2008
(concieved, curated, and organized by Miguel Gutierrez)
For the last 24 hours of 2008, one dance artist in each of the fifty states embarked on a 24-hour durational improvisation, blind-folded and ear-plugged. The intent was to forge a national reflection on the transmission of information in war-torn nations and to momentarily STOP our American inundation of news images and sounds, and instead undergo extreme sensory deprivation in order to simply meditate and exist in empathic resistance.
December 31st to Jan 1st, 2008-2009 – The Garage

#1 #1 #1
Presented as part of 2009’s Bay Area National Dance Week, this piece was a short collaboration with Ara-Glenn Johanson and Sara Zimmerman. It was a brief reflection on controlling our tendencies for chaos and the act of looking at the sky. It was built in an abandoned parking lot in Berkeley.
May, 2009 – Golden Gate Park

Total Facts Known
A movement-based inventory of knowledge an ability, presented through the story of an exceptional and queer young boy who is also a red-winged monster. While coasting through narratives of systemic oppression, unrequited love, and the bleakness of destiny, the boiled down movement vocabulary and pedestrian text exercises of Total Facts Known occasionally reveal a bright and creeping peace and light earned by endurance, sweetness, and necessary self-interest.
September, 2009 – Mama Calizo’s Voice Factory

Practice
I pre-empted the event by dancing suggestively in a monkey suit. Then, I lined up 15 of my friends in the space and one by one, they slapped me across the face. hard. Then one friend showed me his dick. In certain ways, I relinquished control throughout. In other ways, I never did.
November, 2009 – The Garage

Untitled
At Laura Arrington’s SQUART, there was a piece about spring made in 2 hours. It contained elements of durational thrashing, manipulation of voice and emotion by means of brushing one’s teeth, and various images of a birth/rebirth ritual.
April, 2010 – The Lab

DEADLINE IN 1 DAY – Tour Your Work