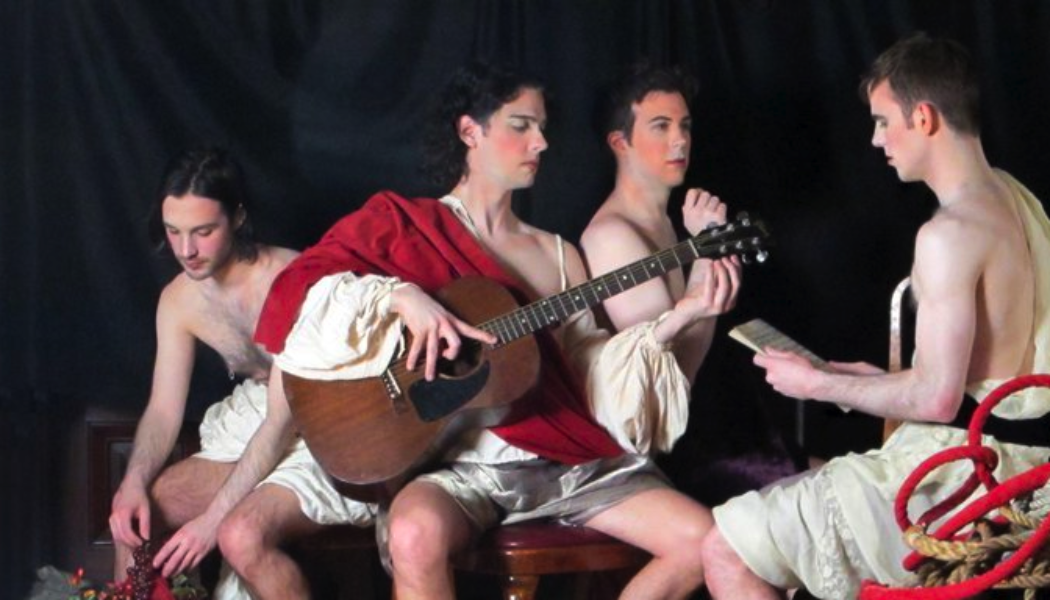 While rehearsing a theater piece based on the life of the Italian Baroque painter Caravaggio, a stressed-out performer has a catastrophic trapeze accident. While stranded on a gurney in a hospital emergency room for 15 hours with a broken neck (‘Alice in Wonderland’ meets ‘The Matrix’), he escapes and finds refuge in the images that flood his mind–the sinners and saints, the prostitutes and gods–that populate Caravaggio’s paintings.

John Kelly is a performance and visual artist whose creative work runs the gamut from mixed media dance theatre works, to vocal concerts, to exhibitions. His work explores the character of creative genius as it occurs in the gradations between the ephemeral and the tangible. Specific works have pondered Egon Schiele, Caravaggio, Antonin Artaud, Joni Mitchell, Barbette, Jean Cocteau; autobiography, the Berlin Wall, the Troubadours, the AIDS epidemic, and Expressionistic Film. These works have been performed at The Kitchen, PS 1, the Warhol Museum, the Whitney Biennial, The Tate Modern, and the Brooklyn Academy of Music’s Next Wave Festival. Paintings, drawings, photographs and video works have been exhibited in galleries and museums. He has sung the music of John Cage at the San Francisco Symphony, and collaborated and recorded with Laurie Anderson, David Del Tredici, Natalie Merchant and Antony and the Johnsons. He has just completed a collection of original songs in collaboration with Carol Lipnik called “The Escape Artist.”

Writings include an autobiography ‘JOHN KELLY’, published by the 2wice Arts Foundation, in association with Aperture. Acting credits include the Broadway production of “James Joyce’s The Dead”, and films by John Turturro and James Franco. Awards and Fellowships include 2 Bessie Awards, 2 Obie Awards, an Alpert Award, the 2010 Ethyl Eichelberger Award, a Visual Aids Vanguard Award, 2 NEA American Masterpieces Awards, and an Eliot Norton Award. Fellowships include NYFA, Art Matters, Inc., The Guggenheim Foundation, The Radcliffe Institute for Advanced Study, The Civitella Ranieri Foundation, and the Rome Prize at the American Academy in Rome. Archive: www.johnkellyperformance.org

THE ESCAPE ARTIST was developed, in part, by The Sundance Institute Theatre Program with ongoing support from the Time Warner Storytelling Fellowship; the Music Theatre Group’s Here-See Residency Series; the Dixon Place HOT! Festival; The 2wice Arts Foundation; The Civitella Ranieri Center; The Rome Prize at the American Academy in Rome; the Armory Artist in Residence Program at the Park Avenue Armory; and a commission from the 2010 Ethyl Eichelberger Award created by Performance Space 122 and made possible with generous support from the Gesso Foundation
The Ethyl Eichelberger Award:
The Ethyl Eichelberger Award is a commissioning award created by Performance Space 122 in 2005 and made possible with the generous support of the Gesso Foundation. The Ethyl Eichelberger Award is given to an artist or group that exemplifies Ethyl’s larger-than-life style and generosity of spirit; who embodies Ethyl’s multi-talented artistic virtuosity, bridging worlds and vitalizing those around them. Recipients include Taylor Mac (2005), Julie Atlas Muz (2006), Justin Bond (2007), Jennifer Miller (2008) and Vaginal Davis (2009). Learn more