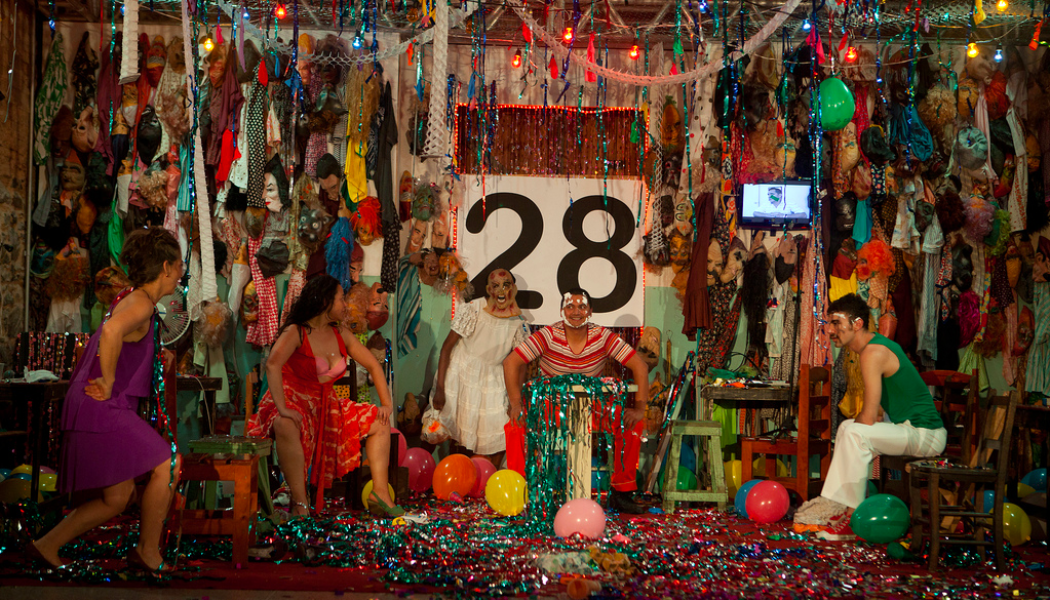 From the world’s ends about ends of the world. The world’s end, in both senses of the term, is the theme of this year’s Performing Arts Programme, which ranges from Greenland to Mali, from Kazakhstan to Colombia, and whose subject-matter likewise embraces extreme climatic zones that show clearly that water is a reason for war and the simple acts of breathing and eating are commodities not everybody can afford. “It won’t suffice for all”, was Heiner Müller’s dispassionate comment, although he is right only if the distribution of resources is accepted as it stands today. Redistribution struggles have become tougher and more ruthless, and not only at the world’s ends, but in its centres as well: on a square in front of a theatre in the Ikebukuro district, an Australian tourist to Tokyo is asked whether he considers Japan a rich country. Homeless persons have made a makeshift tent from truck tarpaulins in that very square, almost invisible against the background of glittering façades, neon signs and passing crowds. Yet the interest of artist Akira Takayama is directed specifically at these outsiders: for his project Compartment City, he asked 300 passers-by the same 30 questions. The Australian smiles for the camera. Yes, it does seem rich.

The Afro-Colombian inhabitants of the small coastal town Guapí, descendants of slaves trafficked into the New World, are part of the routes of illegal coca cultivation and hence enmeshed in a war waged between guerrillas, the military and murderous paramilitaries, whose brutality they externalise in the disconcertingly brutal rituals of a street carnival. The artists of Bogotá’s Mapa Teatro have filmed and documented these events.

Christoph Marthaler, too, embarks on a journey to forgotten people and forgotten landscapes. In Greenland, every administrative official is also a hunter and fisherman. The modern age has hit this region late and with sudden impact. Greenland’s suicide rate is the highest in the world. When the ice of Greenland starts to melt, the island will rise, and large parts of the world will be submerged by the flood. The Greenlanders will get no money out of the Arctic oil finds off their country’s coast.

The Kazakh oilfields and the ethnic Germans formerly resident in Russia and now lured by the oil boom to return to their old homeland will inspire Stefan Kaegi to create a scenic travelogue along the pipelines to speak about migration waves and the reasons behind them.

Travelling to the urban periphery and occupying spaces without any cultural predefinition is another opportunity and task of festivals. All artists who recast the world, who work through interventions and participation, obviously need to leave the protected theatrical space behind. Thus Hungarian director Kornél Mundruczó sets his real fiction about the Eastern European human trafficking and porno industry on two truck beds. Akira Takayama will install his Internet video café in the Karlsplatz underpass. Kristian Smeds from northern Finland and his Lithuanian troupe abandon the conventional stage in favour of a place charged with its surplus past and brutal post-modernism to perform a Finnish-Lithuanian suburban Cherry Orchard as a social object in the contemporary life of a Viennese district. In the works of the artist group Kviss Búmm Bang from Reykjavík, visitors are expected to perform the piece by themselves, following instructions and without an audience except for their fellow players.

In the cultural spaces of Central Europe, the ends of the world and the questions of how and whether to survive have not yet arrived at all, unless we count the literary metaphor of the apocalypse. Here extremism lies in the individuals’ emotional temperatures, in the climate zones extending between people.

The New York City Players with Neutral Hero and the group Elevator Repair Service with The Select based on Hemingway’s The Sun Also Rises come from New York. From Latin America, the work by Mapa Teatro mentioned earlier will be complemented by installations created by Colombian artist Carlos Motta to thematise a unique relationship with the concept of democracy. Directed by Raven Ruëll from Belgium, the outstanding actor Bruno Vanden Broecke will tell us about a mission to Congo and its apories, while Canadian artist Robert Lepage will take us to The Far Side of the Moon. The project Compartment City from Tokyo set up in Karlsplatz will be flanked by two other Japanese productions: the new work of Toshiki Okada (chelfitsch) and a disillusioned Castle of Dreams by the new star of the Tokyo theatre scene, Daisuke Miura. From England, we welcome Katie Mitchell with the premiere of a new play by Simon Stephens in a Royal Court Theatre production.

Lebanese artists Lina Saneh and Rabih Mroué will show their performance Photo-Romance, and Walid Raad’s performance/exhibitionScratching on Things I Could Disavow proposes another, very personal art history of the Arab world.

Another section of the programme, based on a Festwochen commission awarded to young Viennese artist Doris Uhlich and an invitation to Rosalba Torres Guerrero of the company les ballets C de la B, offers a mini-festival as a coproduction with Tanzquartier Wien that will present world premieres of five new projects.

forum festwochen will test survival strategies, subversively and playfully developed, presented and implemented by denizens of world regions who have always had to make do with less or will be forced to do just that in the near future, through urban interventions, artist dialogues, lectures and permanent actions in project space karlsplatz of Kunsthalle Wien, while the performance group Berlin from Antwerp will set standards with its project tagfish.

There are many reasons to look for the performative element at the world’s ends and about the world’s end. One of these is the question, formulated and reformulated a thousand times in a thousand ways in every culture, on every continent and by every generation: how do we want to live? – Stefanie Carp

Below are Contemporary Performance’s Highlights of this year’s festival

Daisuke Miura, young rising star and great hope of Japanese theatre, is quite clear about it: he calls language the “mother of fantasy and lies” and bans it from his staged worlds. Together with his company Potudo-ru, he documents naked survival in an affluent society whose best times are long gone. For his dream castle in the air, this highly productive author and director puts ordinary youngsters in a cluttered apartment behind a glass screen: they watch TV, cook noodles, drink beer from cans, play video games or have sex. Saturated boredom and lack of perspective leave no space for stories or feelings. The sounds of a pack of cigarettes being placed back on a table or of a toilet being flushed are the only events. For Daisuke Miura, “words are just ways to escape”. His radical depictions of love and sex paint a multifaceted and uncompromising picture of young people’s lives in modern-day Tokyo.

In 2006, he was the youngest director ever to win Japan’s most important theatre award, the Kunio Kushida Prize.

No fiesta without fiend – this is the odd motto of an even odder street festival celebrated annually on 28 December in Guapí, a small town on Colombia’s Pacific coast: the “Day of the Holy Innocents”. Originally a reminder of the Biblical Massacre of the Innocents commemorated in all of Latin America, it has mutated into a brutal carnival in this place of tropical forests and rivers inhabited by Afro-Colombians and ridden by drug wars, carnage perpetrated by paramilitary troops and guerrilla warfare: men dressed as women, their faces hidden behind cheap plastic monster masks, roam the streets wielding whips and lashing out at others, who make a sport of dodging their pursuers’ blows, often in vain. Mapa Teatro, one of the best-known theatre ensembles of Colombia, is adept at blending political activism and aesthetic practice, as their Testigo de las Ruinas – Witness to the Ruins premiered in Vienna in 2005 impressively showed. Now the real-life Santos Inocentes fiesta is documented in the context of a staged birthday party for the director: local marimba music, video recordings and oral history blend seamlessly with the confessions of brutal paramilitaries.

Christoph Marthaler directed the world premiere of Wüstenbuch, the latest work for the stage of Austrian composer Beat Furrer.

The desert is an alien place, a memoryless metaphor of death and nothingness – and thus also a place where the new can emerge. In Wüstenbuch, the narrative of a journey to the desert is composed of several text layers: scenes from Ingeborg Bachmann’s eponymous fragment interlock with a text and scenario by Händl Klaus and texts by Lucretius, Machado, Valente, Apuleius and the ancient Egyptian papyrus Berlin 3024, in which an unknown man describes his yearning for death. As spoken texts, the fragments are part of the score that sometimes blend with the sound of the music and then again form text islands whose effect derives from the sound of the variously pronounced words. Beat Furrer’s fascinating musical-dramatic journey is given a congenial interpretation by Christoph Marthaler’s visual language. A hotel somewhere, a temporary, albeit makeshift, home for its guests. We watch them and their attempts to establish contact, to find some human warmth, only to be frustrated time and again.

To view the full program visit the Wiener Festwochen Website